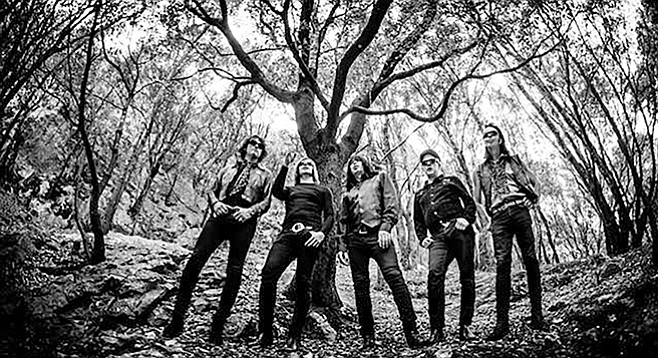 The Morlocks drop their first album in eight years

And other music news from Greg Laswell, Rick Elias, The Silent Comedy and Tori Roze

The Morlocks, "Bring On The Mesmeric Condition"

Former Hotel Del desk clerk Greg Laswell’s new album, Next Time, was mastered by Grammy-winner Gavin Lurssen (Tom Waits, Leonard Cohen), with its first single “Royal Empress” now streaming online. “I feel more in control than I did on my last record [Everyone Thinks I Dodged a Bullet], says Laswell. “Life is the most difficult it has ever been circumstantially, but I’m also kind of okay, even if just for moments, which is all life is anyway. My hope is that’s what came across with these songs.”

Longtime local musician Rick Elias, who appeared and performed in the film That Thing You Do, is battling brain cancer. Elias first earned local notice with Harlequin, a keyboard-heavy mid-1970s progressive rock band similar to Yes, and local Andy Robinson’s group Horsefeathers. He made several solo records with the Rick Elias Band, which included guitarist Marc Intravaia. Rick Elias and the Confessions, a Christian rock band featuring Intravaia, saw their single “Confession of Love” peak at number four on the national Christian Top 40 chart. A GoFundMe campaign to raise money for medical expenses is being organized by Intravaia.

Tori Roze landed a tune in the film 66 is Nowhere, as well as releasing a new album called Baggage Claim (which includes a cover of Nirvana's "Smells Like Teen Spirit"). She’ll open for Oakland psychedelic soul quartet Bells Atlas on October 7 at Soda Bar.

“Enemies Multiply,” the title single to the Silent Comedy’s album debuting October 19 at the Casbah, is streaming online. It’s described by the band as “an examination of destructive personality types and how they affect the world around us.” According to bassist-singer Joshua Zimmerman, “This album is a collection of anthems for dark times. Given the state of society today, we feel this is a perfect time to release Enemies Multiply. The average person has become more engaged in issues of exploitation and injustice than we have seen in recent years, and these songs speak directly to the feelings of anger, defiance, and frustration that many of us are feeling."

The Silent Comedy and Creature Canyon

A new album from former Ozzy guitarist Jake E. Lee and his band Red Dragon Cartel, Patina, drops November 9, with a music video now streaming for the first single, “Havana.” Produced by Anthony Esposito and Lee and mixed by Max Norman (whose relationship with Lee dates back to his days with Osbourne), the band features Esposito on bass with singer Darren James Smith and drummer Phil Varone (ex-Saigon Kick, Skid Row). Among the influences cited by Lee for the album, he mentions "Robin Trower, Santana, Black Sabbath, Captain Beyond, Thin Lizzy, Grand Funk Railroad, David Bowie...I could go on and on, but let me also say that there are also hints of Sly & the Family Stone, Dick Dale, psychedelia and even some George Benson. Don't let any of that scare you, it all makes sense!"

Influential punk bank the Penetrators will reunite for the Casbah's 30th anniversary celebration on January 18, with singer Gary Heffern flying in from Finland to perform.