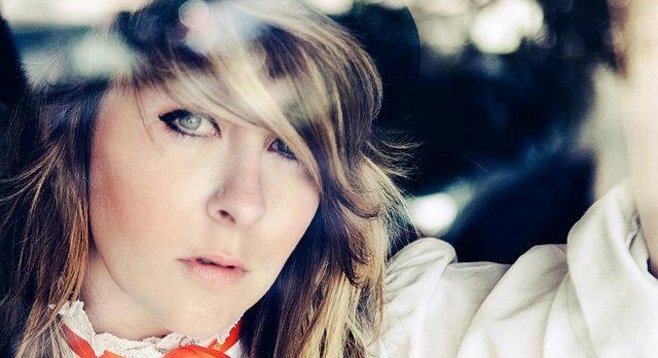 Sound description: Jazzy soulful rock, with a bit of stank on it.

“My parents maintained a very musical household,” says singer-trumpeter Tori Roze. “My mom played with Randy Holden, the lead guitarist in Blue Cheer, and she opened for groups like Canned Heat and Three Dog Night. She used to hold Janis Joplin’s Southern Comfort bottle for her offstage.”

Roze’s parents were also involved with the San Diego Repertory Theatre and with Indian Magique, a theatrical troupe that won the Canadian Emmy for Best Comedy Show in 1977. In high school Roze fronted the band Carne Askata before departing to attend Boston Conservatory for a year. After doing a semester in London with music and theater classes at the Old Globe, she eventually graduated with a degree in theater from UC Santa Cruz.

In summer 2008, Roze played her first show with her rock ’n’ soul combo band the Hot Mess at Portugalia in Ocean Beach. “The owner loved the turnout, so we made it a weekly Wednesday night event,” says Roze. “We moved it to the Ruby Room on Tuesdays in June because Portugalia unfortunately closed down after being open for 8 years. The theme is generally female fronted bands, but there is so much male talent out there that we have honorary men bands. I use it as a platform to get performances out there that people wouldn’t normally get to see or know about it. I play out a lot and go to shows a lot so I gather all these random talents and throw a party.”

“Bitter Sober weren’t a band until I randomly booked them one night,” says Roze. “They quickly snowballed and became very popular and got signed.”

Tori Roze and the Hot Mess performs R&B, jazz, and rock originals. “If Erykah Badu, Amy Winehouse, Ella Fitzgerald, Pink, and Adele were all to get together,” she says, “you’d get the essence of our sound. Bottom line: we like to put some stank on it.”

“It’s hard being a soul based band in San Diego because we're not indie rock,” says Roze. “We play a lot of house parties, but we don’t get a lot of love from venues. So we’ve banned together as a collective with people like the Styletones, Stevie and the High Staxx, the Amanda Wagner Band, Nick Z, and Rob Deez to book shows together.

“Not only as the leader of my band, but as a manager, booker, and promoter, what I’m trying to do is get us all together to listen to good music at good venues. I want to pull together all these scenes that are seemingly separate and share the love...it’s a big, wet blanket of love.”

In late 2010, she recorded a video for her song “Tick Tock,” off her first full-length, and she and her band were nominated for Best Blues Album in the 2011 San Diego Music Awards, for thier full-length From the Hip.

She began recording a sophomore followup in early 2012, while still holding a day job at the Village Hat Shop (with locales in Hillcrest and Seaport Village) and producing the Female Fronted Bands concert series at the Ruby Room.

Turbulence was released in early 2013. Asked if there's a single thought that unifies all of the songs on the album, she says “That life is turbulent and unpredictable, but we are all human and help each other feel better understood. Every one struggles with the themes present on this album, like money, self-realization, lust, commitment, perfection, distance, loss, death. It’s best to make lemonade out of these lemony moments.”

In 2918, she landed a tune in the film 66 is Nowhere, as well as releasing a new album called Baggage Claim.