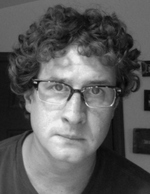 As an undergraduate at Thomas Aquinas College near Ojai, California, Matthew Lickona co-founded and ran The Hype, a college lit-mag printed on the school's copier and sold at a dollar a copy to pay off speeding tickets acquired while trying to make movie times in Los Angeles. This may or may not have helped him to land a job at the Reader upon graduation in 1995, but the paper did reprint some of his collegiate Easter Island-based cartoons, and later, his Mudflap Girls series. He has been at the paper ever since, in a variety of capacities: feature writer, wine columnist, church reviewer, restaurant critic, television columnist, editor at large, and now, film critic. Plus some other stuff under various pseudonyms.

He is the author of a couple of books (Swimming with Scapulars, Surfing with Mel), and his essays have appeared in places like The Awl, FirstThings.com, and Doublethink. In his spare time, he likes to write movie pitches and country songs.

Happy Trumpsgiving Hunter P. Thompson: "Sure, everybody here agrees that Trump is a fascist hatemonger with no sense of respect or decency. That just means he’s just like the rest of us. Those protesters who ...

From the archives
San Diego men look at selves in swimsuits

Men's Summer Swimsuit Issue Nowadays, whenever I occasion to strip down to my swimwear, my own interior monologue pesters me, "Are you standing up straight? Is your stomach tucked in? Are there zits on your ...

From the archives
USD students look back at high school, the campus's Catholicism

Class Struggle “We had a lot of cliques at my school. There were the drama kids, and we had a group we actually called the Clique. It was just the people that seemed to party ...

From the archives
Personal history of La Mesa, the charm of Encanto

Where Sweet Peace and Love Abidith During school vacations, Carl and I hopped the freight train that chugged through twice a week. It stopped in La Mesa to unload flatbeds of planks to the lumberyard. ...

I Have Purchased a Grey Cardigan Sweater My wife and I fell in love over wine, bourbon, and cognac. We attended a college with a dry campus, and many evenings were spent sitting in my ...

Janet, My Mother, and Me “We went out to Belmont, and Harry couldn’t stop picking winners. We went to the 21 Club for dinner, and we scalped tickets for a Broadway musical in the fourth ...

The Door’s Open. Go In! Some beards, like Alan’s, are magnificent in their autonomy — they grow as they wish, untrimmed and untamed. “You shall not round the corners of your beard.” These beards grow ...

From the archives
San Diego Reader’s Best Of issue 2021

Best Friend to Joshua Trees Is there anything to be done about the plight of the Joshua tree? While state and federal agencies dither over whether the imperiled desert dweller deserves endangered species protections, one ...

An unhampered look at Carlsbad's Army Navy Academy "Unlike the upper-school cadets, these boys will break down and cry, a lot. They don’t want other boys to see ’em cry, ’cause it’s not macho. But ...