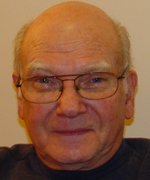 While attending the University of Wisconsin, Don Bauder held a number of posts at the campus newspaper, including editor in chief. He received a bachelor's degree in business (1959) and a master's in journalism (1961) and then spent four years in advertising and PR. In 1964, he joined the Chicago bureau of Business Week magazine as reporter/writer. In 1966, he got the job as bureau chief in Cleveland.

Don left Cleveland in 1973 to become financial editor and columnist for the San Diego Union. When the Union and Tribune merged in the early 1990s, he remained at that post; in '95, he was named senior columnist at the Union-Tribune.

He retired from the U-T in March of 2003 and began writing his weekly column for the Reader in April of 2003. Now he writes a column every two weeks, and contributes to News Ticker regularly.

(a book about a local Ponzi scheme), which stayed on the L.A. Times best-seller list for more than two months. He's been married for 56 years and has two sons and two grandsons.

Over $1 million per subsidized job Then-Governor Jeb Bush seduced La Jolla’s Scripps Research Institute with almost $600 million in various kinds of incentives, both from the state and from Palm Beach County. The facility, ...

From the archives
Local Olaf Wieghorst fans get burned

Olaf Wieghorst trusted the wrong man Almeida got his start at George Thackeray’s gallery in the late ’50s. He and his wife Grace agreed to talk to me at their house in Ocean Beach, a ...

From the archives
San Diego roads that have disappeared, vanished movie palaces

The Lost Roads of San Diego In 1944, the land between Midway Drive and Sports Arena Boulevard (then Frontier Street) became combed with the short streets of a wartime housing project. After the war, transients ...

Janet, My Mother, and Me “We went out to Belmont, and Harry couldn’t stop picking winners. We went to the 21 Club for dinner, and we scalped tickets for a Broadway musical in the fourth ...

When Dick Nixon Came to Town San Diego entrepreneur Arnholt Smith, one of Nixon’s earliest supporters, remembered a melancholy evening in the early ’60s when Nixon was holding a meeting and asked him to get ...

Roman Abramovich Yacht on San Diego’s Embarcadero Two helicopter pads, pool, spa, hot tub... It was borrowed by Madonna back in 2010 (according to Luxist.com), when she was filming her movie about the Duke of ...

Leavin' On a Jet Plane Tax dollars fund airport blitzkrieg. The stealth campaign that spends your money to buy your vote. CEO Thella Bowens proudly pointed to the poll's key finding: that public support for ...

From the archives
National City – still up and coming

National City – a Mayor Daley-type political machine To the south of San Diego, within range of the shadows cast by the Coronado Bridge, lies National City. Frequently described as the “backlot" of San Diego, ...

From the archives National City Village Square
Who stole your iPod, don't embarrass the Hell's Angels

Don't Embarrass the Hells Angels They will not tolerate someone pretending to be a member who is not really a member. By Eva Knott, July 25, 2012 Roman Abramovich Yacht on San Diego’s Embarcadero It ...