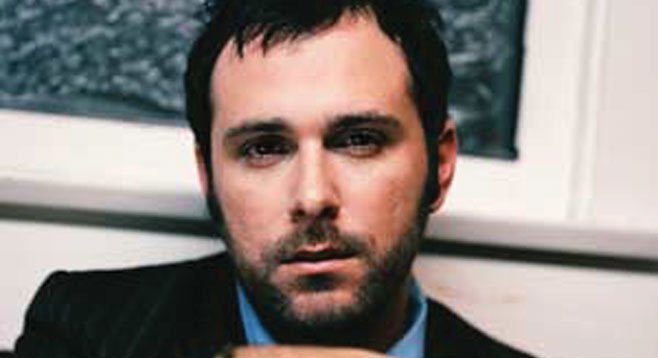 Growing up, Greg Laswell says he confiscated his sister’s upright piano after she showed no interest in the instrument. “It was my sister’s 13th birthday present, but she never got into it…I remember waiting for her to finish practicing the soundtrack to Land before Time after school so I could take it over until dinner. I’ve admitted this before, but the first song I learned on piano was ‘Pop Goes the World’ by Men Without Hats.”

Laswell was born in Long Beach, moving to San Diego in 1993 and graduating from Point Loma Nazerene University. His original band Shillglen released one album before Laswell went solo and signed with Vanguard Records in 2006.

He’s among a string of local musicians to have his music featured on national television shows. His tune “High and Low” played on an October 2006 episode of the CBS crime show Without a Trace, and “What a Day” was heard on the legal drama series Shark. His music has also been placed in episodes of The Hills on MTV, Smallville and One Tree Hill on the CW, and in the 2006 season finale of NUMB3RS on CBS. “What a Day” was also featured in the 2006 film Danika, starring Marisa Tomei.

His first release, Good Movie, won a 2004 San Diego Music Award for Best Local Recording. His album Through Toledo was nominated for Album of the Year in 2007, with Laswell taking home the trophy that year for Song of the Year (“Sing Teresa Says”). He’s been romatically linked to singer-actress Mandy Moore.

In summer 2008, Laswell’s songs were picked up by the Muzak canned music firm, which is developing what it calls “audio architecture” for Courtyard Hotel lobbies. In addition, two tracks from Laswell’s EP How the Day Sounds – “Days Go On” and the title track – are featured at Courtyard’s “interactive lobby” at gocourtyard.com. The songs play as a “global brand manager” for Courtyard by Marriott explains the chain’s new focus on musical marketing.

Local businesses like Lemon Grove Honda and Village Walk in Little Italy pay Muzak for use of around a hundred different music programming options. According to Muzak’s website, ten million people hear their inoffensive song selections every day. “If you’re shopping, eating, playing, [or] traveling, somewhere along the line you’ll encounter or be part of the Muzak experience,” according to Muzak’s website.

Laswell was also chosen as the debut artist in the Whole Foods Artist Discovery Series. Beginning June 2008, How the Day Sounds is being sold in the chain’s natural food stores throughout the U.S. His songs have also been heard on TV shows like Grey’s Anatomy, Shark, Without a Trace, Smallville, One Tree Hill, and MTV's "reality" show The Hills.

The video for “How The Day Sounds” features Elijah Wood.

His album Three Flights from Alto Nido was released in summer 2008. The record debuted at number 23 on Billboard’s Top Heatseekers chart and reached number 5 on the iTunes Rock Chart.

In Autumn 2008, Laswell’s song “And Then You” was featured in the season premiere of Grey’s Anatomy, while “Comes and Goes” was heard on the October 23 episode and “True Blood” was on the October 26 episode. His song “How The Day Sounds” was heard in an episode of the 90210 revival series entitled “Wide Awake And Dreaming.”

A month-long national tour with Sara Bareilles began September 25, 2010 in Portland, while the single from Take a Bow “Take Everything” ranked in the top five at Triple A radio. Around this time, he announced his engagement to Ingrid Michaelson.

Following two headline tours and a cross-country tour with Sara Bareilles in 2011, Laswell hit the road in April for a co-headline tour with Lenka, which wrapped in San Diego on April 14 at Anthology. His self-produced 2012 full-length Landline (Vanguard Records) included a new duet with Sara Bareilles, “Come Back Down,” as well as guest appearances by Ingrid Michaelson, Sia, and others.

A new stop-motion video for “Back to You” appeared online in early 2012, and he sings a track (“Addicted”) on the Morgan Page 2012 full-length In the Air. His single “Come Back Down” featuring Sara Bareilles was the iTunes Single Of The Week for the last week of April, 2012.

A national tour behind his full-length Landline wrapped up June 22, 2012, in Philadelphia, followed by a tour with headliner Ingrid Michaelson that ran from July 11 (Omaha, NE) through August 4 (Amagansett, NY).

His 2014 full-length I Was Going to be an Astronaut features remakes of ten Laswell songs (plus a Sparklehorse cover, "It's a Wonderful Life"). "I'd been playing alternate versions of some of these songs at my shows over the past few years and every time people would come up afterwards and ask if there was ever going to be any recorded versions of those songs. It happened enough times that I decided to do it. Another reason for doing this is because when I slow down a song or sing it a different way than when originally recorded, the meaning tends to change."

I Was Going to be an Astronaut dropped February 11, 2014, with a release party at Lestat's in Normal Heights.

March 2016 saw the Vanguard Records release of Everyone Thinks I Dodged A Bullet, entirely written, performed, produced, and mixed by Laswell, with the exception of cello performed by Colette Alexander, and mastering by Evren Göknar. It was made available on CD, vinyl, and as a digital release. The deluxe edition of Everyone Thinks I Dodged A Bullet, released in April 2016, features six bonus tracks, including one new song and a cover of "Adore" by Savages.

A new album debuted in late 2018, Next Time, mastered by Grammy-winner Gavin Lurssen (Tom Waits, Leonard Cohen), with its first single “Royal Empress.” “I feel more in control than I did on my last record [Everyone Thinks I Dodged a Bullet], says Laswell. “Life is the most difficult it has ever been circumstantially, but I’m also kind of okay, even if just for moments, which is all life is anyway. My hope is that’s what came across with these songs.”

Laswell counts two local non-music gigs among the worst jobs he can recall doing. “[I was a] Hotel del Coronado front desk attendant. Rich people blame everything that goes wrong on the poor college kid behind the front desk. I literally walked off in the middle of one of my shifts and never went back.”

The other lousy job? “Bike-taxi driver in downtown. It seemed like a good idea at first, but most of the people who wanted a ride from me were drunk, fat people. I worked there for one day.”

As for his worst music gig, “It was on the roof of a Whole Foods. They were carrying my record at the time as part of a cross-marketing campaign, and someone thought it would be cool for me to play on the roof parking lot of one of their flagship stores. I thought so, too, and so did the four people that showed up.”