After four decades and over twenty albums, Tom Waits, a 1968 graduate of Chula Vista's Hilltop High, is arguably the most substantial music figure to emerge from the San Diego area. Ever since the Eagles made a hit of Waits' "Ol' 55," his songs have been interpreted by Bruce Springsteen, Bob Seger, Rod Stewart, Johnny Cash, Tim Buckley, and scads of underground artists.

Waits was ten years old when his family moved to National City in 1969. He learned piano at a neighbor's house, and later bought a 1955 Buick Roadmaster on the Mile of Cars, for $125. His first guitar, a Gibson, cost $12. His first band of note was the R&B group the System.

Waits moved to L.A.'s Tropicana Hotel in 1971 and began his recording career.

In late 2010, reissues of his first four albums on 180-gram vinyl were released. In addition, Waits collaborated with the Preservation Hall Jazz Band to release a limited edition 78 RPM vinyl recording of “Tootie Ma Was a Big Fine Thing” and “Corrine Died On the Battlefield.”

For 2011, in addition to being inducted into the Rock & Roll Hall of Fame, he published a book of poetry in March. Hard Ground features Waits’ words alongside photographs of the homeless taken by award-winning photographer Michael O’Brien. According to University of Texas Press, the book is “a portrait of homelessness that impels us to look into the eyes of people who live on the hard ground and recognize our common humanity.”

A limited first edition chap book of his poem “Seeds on Hard Ground” was launched exclusively through his website, to raise funds for homeless services. The poem is a lyrical ballad in the voices of those who walked, fell, or were pushed to the margins of society. Waits is donating proceeds of the poem, limited to 1,000 copies each in North America and Europe, to Redwood Food Bank, Sonoma County’s Homeless Referral Services and Family Support Center.

His seventies relationship with Rickie Lee Jones was detailed in a Spring 2011 issue of British music magazine Mojo, issue #212.

A book Tom Waits on Tom Waits: Interviews and Encounters published in August 2011 by Chicago Review Press features over 50 interviews from print and broadcasts, beginning with his 1973 album Closing Time and progressing through 2006’s Orphans: Brawlers, Bawlers & Bastards.

The single “Bad As Me” was released from the same-named full-length that dropped October 25, 2011, containing his first studio recording of all-new songs in seven years. While recording, he also voiced a character in the upcoming animated musical The Monster of Nix.

A late 2011 video for “Satisfied” features Waits dancing around the backyard in stark black and white, directed by Jesse Dylan (eldest son of Bob Dylan), and with Keith Richards playing guitar on the track.

He appeared on Letterman July 9 and Fallon on July 10, 2012, performing songs from his latest full-length Bad As Me. On the first night, after chatting with the host, Waits performed “Chicago” with his son Casey on drums, long time bassist Larry Taylor, guitarist David Hidalgo (Los Lobos), keyboardist Augie Myers, and guitarist Big Bill Morganfield. On the second night, he performed “Raised Right Men.”

Bad As Me was later nominated for a 2013 Grammy Award as Best Alternative Music Album, pitting him against such unlikely competitors as Bjork and Fiona Apple.

In August 2012, a new video for “Hell Broke Luce” began streaming online. Says Waits, “[Director] Matt Mahurin has created an apocalyptic war dream to accompany the song...I envisioned it as an enlightened drill sergeant yelling the hard truths of war to a brand new batch of recruits. The video grew from the gnawing image of a soldier pulling his home, through a battlefield, at the end of a rope.”

He appeared on the Simpsons in January 2013, in an episode entitled “Homer Goes to Prep School,” playing himself (in a non-singing role) and introducing Homer to a community of survivalists.

His collaboration with Keith Richards “Shenandoah” appeared on the two-disc compilation Son of Rogues Gallery: Pirate Ballads, Sea Songs & Chanteys, released February 19, 2013, via the Anti-Records label. His book with photographer/film director Anton Corbijn, Waits/Corbijn '77-'11 (released May 8, 2013), features 200 pages of Waits portraits taken by Corbijn over four decades, plus 50 pages of the first published collection of musings and photographs taken by Waits himself. The linen bound book has introductions written by film director Jim Jarmusch and music critic Robert Christgau. The collector's edition linen slipcase edition is limited to 6,600 copies.

In May 2013, he joined the Rolling Stones on stage in Oakland on the second stop on their 50 & Counting arena tour, performing “Little Red Rooster” as a duet with Mick Jagger, who also played the harmonica on the tune.

He performed his first concert in five years at Neil Young's 27th annual Bridge School Benefit Concert on October 27, 2013 with David Hidalgo on guitar, Les Claypool on bass, and drummer Casey Waits. Says Waits, “When Neil told me he was serving burnt cow's eyes on a flat tire and it's all gluten free, I invited myself!”

In early 2014, for the first time in more than two decades, Waits signed with an agency, with William Morris Endeavor representing the singer-songwriter, composer, and actor in all areas. He was then announced as one of 14 judges presiding over the 2014 International Songwriting Competition (ISC), along with Sarah McLachlan, Pat Metheny, Sara Evans, Bastille, Avicii, Wayne Shorter, Casting Crowns, and John Hiatt.

Director John Lamb launched a Kickstarter campaign in summer 2014 to restore the animated short “Tom Waits For No One,” starring a rotoscoped Waits performing “The One That Got Away” in 1979 at Hollywood's La Brea Stage.

In May 2015, Waits appeared on one of the final episodes of David Letterman's late night talk show, performing a bittersweet new song called "Take One Last Look." Early the following year, he released an online stream of his take on Blind Willie Johnson's "Soul Of A Man," from a multi-contributor tribute album God Don't Never Change: The Songs Of Blind Willie Johnson.

Waits and songwriting partner Kathleen Brennan remixed his 2004 album Real Gone, which was released in 2017 alongside remastered versions of 2002’s Alice and Blood Money.

Tom Waits gave a standout performance as Mr. Nick (the devil) in The Imaginarium of Doctor Parnassus. It was a supporting role that deserved an Oscar. He was one of the sneakiest/malevolent devils I ever saw in a movie, and without the horns and red cape. He scared me! Definitely worth renting if you missed the movie, just to see Waits. 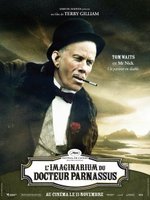 Tom Waits as the devil! Yikes.