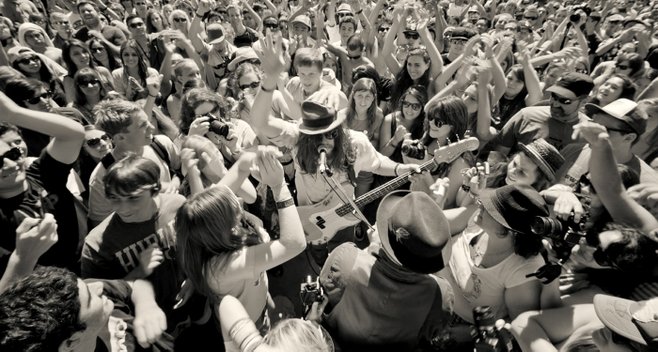 “Our music combines elements of Americana, rock, blues, gospel, and folk to create a sort of whiskey-fueled tent-revival sound,” says Joshua Zimmerman, who heads up the Silent Comedy alongside his brother Jeremiah. “Over the years, our show has morphed from a quirky acoustic-folk experience into a loud rock ’n’ roll extravaganza. The end result of this mix makes for a rowdy stage show that usually holds a few surprises.”

“The Silent Comedy started casually in 2005. My brother and I wanted to record some songs that didn’t fit with the band we played in at the time. Eventually, some of our friends learned the songs, and we accidentally started playing shows. Many years and three lineups later, we’re touring internationally and getting opportunities that we didn’t imagine back when we were first goofing off at coffee shops.”

Among those opportunities have been scoring portions of a documentary film called Working Class, as well as landing their song “Bartholomew” in the 2012 History Channel miniseries Hatfields & McCoys.

In concert, nobody can say that Zimmerman doesn’t give his all onstage. “I have dried blood on my bass and pedals, I’ve ripped the knees off my pants and skin off both of my knees, I’ve broken instruments, and almost broken my hand. I’ve even hurt members of the crowd. Our shows are not mundane affairs.”

Not that he’s always been some kind of altered states rock and roll wildman. “When I was 19, I very deliberately got drunk in a safe, controlled environment, to see how I would react. I didn’t want to get drunk in a strange environment without knowing how my body and mind would handle it and end up making a fool of myself. I also wanted to know where my limits were, so I could drink responsibly. I was actually a really good kid, alcoholically speaking, so I didn’t drink much when I was young.”

After playing the 2012 Bonnaroo music festival in Manchester, Tennessee, Joshua and company returned to San Diego, where he says most of their favorite gigs happen.

“Any show at the Casbah is a special moment for us. When you think about the history of that place, and the talent that has shared that stage, it’s humbling. The SoCo Music Experience was another very memorable event in San Diego. To walk onstage to thousands of people and have the energy transfer from the stage to the crowd was remarkable.”