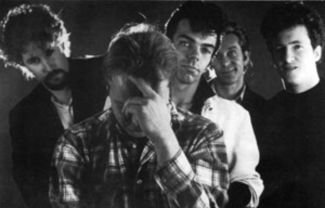 Influences: The Ramones, the Zeros, the Clash

The Penetrators, founded by guitarist Scott Harrington and drummer Joel Kmak, turned up frequently in the late 1970s at SD punk venues like downtown's Skeleton Club.

The Pens got a big break in 1978 by opening for the Ramones at SDSU's Montezuma Hall, even though original guitarist Scott Harrington quit over the gig, feeling the band wasn't ready. “That was where it all came together for us,” says bassist Chris Sullivan, who lived in La Mesa at the time. Music writer Steve Esmedina at the Reader teamed up with KGB-FM DJ Jim McInnes to increase public awareness of the band.

When their first EP was released, Chris Davies had replaced guitarist Scott Harrington, having learned the songs by sneaking a tape recorder into Penetrators' concerts. Gary Heffern (Monotone & the Nucleoids) joined up, as did keyboardist-turned-drummer Dan McLain, who operated Monty Rockers Records on El Cajon Boulevard and replaced original drummer Joel Kmak, who had joined the Hitmakers (and would later be a Beat Farmer). McLain would later found the Snuggle Bunnies and become known as Country Dick Montana, leader of the Beat Farmers.

“We played the California Theater,” recalls frontman Gary Heffern, “and a bouncer started beating up a kid, and ended up hitting me when I tried to stop him. Kids started pulling up their seats and throwing them at the bouncers...I turned around, and a cop was telling me I was under arrest for inciting a riot. The news that night had cops in full riot gear showing up.”

“There was also the time we first headlined the Community Concourse, with Dick Dale opening, and after the show punks were throwing garbage cans into the bank windows, from the upper parking lot. Once again, cops showed up in riot gear. They were there again when we did the first of a two night stand at the La Paloma [Theater], along with the fire department, but that time it was because the music pit collapsed.”

“There was the time we played at the San Dieguito high school gym, and someone in the band got caught either smoking pot or drinking. The principal stopped the show, and the kids went crazy and had a teenage riot. One of those kids reminded me of that show years later; his name was Eddie Vedder.” The future Pearl Jam vocalist would appear on Heffern’s album Painful Days.

In 1980, while recording at Western Adio Studios in Kearny Mesa and selling out local venues as large as Golden Hall, the Penetrators were Gary Heffern, Chris Sullivan, Jim Call, Chris Davies, and Dan McLain. At the time, only Chris Davies made his living solely as a musician. Heffern worked for the phone company, Sullivan worked at a radio station, and Call managed a Pacific Beath theater, where McLain was a snack bar clerk.

The band split in 1984, with its members going on to play in the Beat Farmers, the Jacks, and others. Most of the members still live in San Diego, other than Heffern, who lives in Finland; McLain died in 1995. Former Penetrator Chris Sullivan joined latterday Beat Farmer Buddy Blue in the Jacks - as of 2009, both he and Penetrator Joel Kmak play in the re-formed Beat Farmers, now known as the Farmers. Jim Call plays keyboards with Zirk Ubu Circus, while Chris Davies ran the music shop Cow Records in Ocean Beach. Scott Harrington produced the first record by Manual Scan (who later evolved into the Shambles).

The Penetrators reunited in November 2005 at the Casbah to play a tribute show to McLain/Country Dick called "Ten Years Without Dick."

The Casbah's 20th anniversary in January 2009 brought out most of the surviving Penetrators for one more reunion performance. Gary Heffern, Joel Kmak, Chris Sullivan, Chris Davies and Jim Call participated in the reunion.

A late January 2010 reunion set at the Casbah was cancelled by the band, citing personal reasons. A partial reunion did take place at the Casbah the following year, and they picked up a Lifetime Achievement Award at the 2011 San Diego Music Awards. Another reunion set was announced for the Casbah on January 17, 2014, on a bill that also included local psychedelic popsters the Loons.