Friends bring camaraderie, an ear, a shoulder, fun, and numerous other positives into one’s life. In the case of one of my friends, it’s not so much what she’s added as what she’s subtracted from our time together that I enjoy. She’s a pescatarian—someone who abstains from consuming animals with the exception of seafood. When we go out to eat, I often follow her meatless lead; dining only on fish, vegetarian, and vegan dishes. To her credit, she’s always telling me to get whatever I want, and never lets her philosophy cloud over the dinner table. I wade through pescatarian waters voluntarily, because it’s a nice departure from my usual swine- and meat-rich diet.

Make no mistake — I love beef, bacon, duck, and other fleshy, fatty creatures, but these days, most restaurants operate as though they’re on a mission to see who can get the most pork belly, sausage, and duck fat on their menu and into their dishes. Eating that way regularly can take its toll, so I’ve come to relish meals with my pescatarian pal, not just because she has a sterling personality and loves craft beer (major bonus), but because it gives me the opportunity to see what those who share her dietary lifestyle choice have as options when they go out on the town.

The site of our most recent get-together was Hillcrest’s Uptown Tavern (1236 University Avenue), the arrival of which I announced back in May (and Reader colleague Ian Pike later blogged his first impressions of). Installed at the former site of Ono Sushi (which reportedly closed when its owners decided to leave the restaurant business on a high note), it brings together numerous construction elements, providing a basic aesthetic bordering on unfinished. Boxy, but not without its charm, it takes the reclaimed, industrial thing farther than any place I’ve been to that wasn’t currently in its build-out phase. I wasn’t crazy about it in the daylight, but the spot’s appeal went up once darkness descended and the lighting system’s yellows, pinks, and purples took over. Seeing the place absolutely packed (on a Thursday, no less) helped me see it in all its glory.

Food-wise, Uptown is in keeping with current trends. There’s plenty of bacon and other meat-fortified indulgences. But there is also a vast array of dishes for non-meat-eaters to choose from…far more than most restaurants I’ve been to of late. Excited about that, we ordered way more than we could eat then went straight to work figuring out how we’d divvy things up in our to-go boxes as we waited for our food to arrive.

The first order out was a pair of sliders that made me think I’d made a big mistake and, perhaps, fallen victim to a brand of disappointment many a vegetarian experience. The “meat” portion of these starter sandwiches consisted of house-made veggie patties made primarily of quinoa. I’ve had several quinoa burgers in my day (my favorite being at Burger Lounge)—enjoyed some, but disliked most. This one fell in the latter category. It wasn’t highly seasoned, came across as mealy, and was served with bread that was quite dry and could have used more garlic aioli to moisten things up. I was grateful for the pitcher of water they left on our table, as it was key in combating the cottonmouth the starter brought on. To my surprise, my friend thought the sliders were very flavorful. I’m not saying it made me start doubting myself, but I did wonder, in this case, whose opinion would be more valuable to readers, particularly the veg sect. 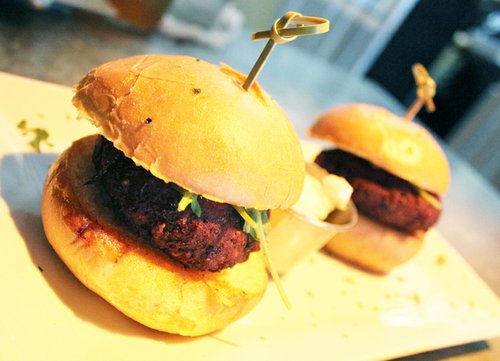 We had a similarly split opinion regarding a large bowl of tiny, charred green globes listed on the menu as “better than your Momma’s Brussels sprouts.” Glistening with a thin layer of roasted garlic vinaigrette, they had nice red chili flake heat, but were a bit bland. Even when I got a bite with a sliver of Parmegiano-Reggiano, there simply wasn’t enough salt. The option of adding bacon is presented in writing on the menu and with enthusiasm at time of order by the wait staff (which, I must note, is made up of extremely friendly veterans from Uptown ownership The Verant Group’s other similar venues), so it’s my guess that they consider this the optimal way to enjoy it, but maybe failed to adjust the salt level when we didn’t go that direction. Still, my dining companion thought they were outstanding. 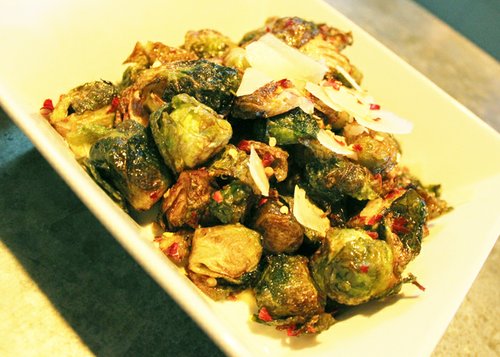 More close-minded carnivores—the type of brash morons who write-off vegetarians and vegans as having no palate or love of food—would probably lay the blame on their no-meat counterpart, however, I think our difference of opinion had more to do with my taste buds. In restaurants, meats are liberally salted and seasoned in general, particularly large hunks of meat such as steaks, where a heavy exterior layer of salt and pepper is applied so that it carries through and flavors a dense inner core. Being that I eat meat many days of the week, many times at restaurants, my palate is much more accustom to aggressive seasoning, whereas most vegetable-based dishes are meant to shine on their own with just enough salt and herbs to gently lift their natural flavors. That probably explains the above taste discrepancies. 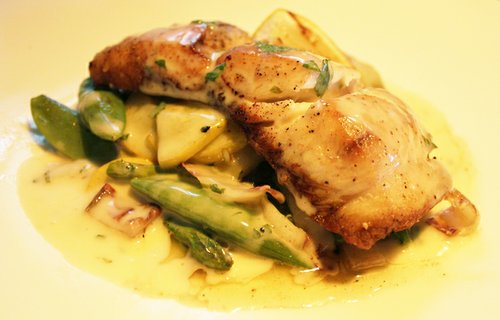 One thing I had absolutely no complaints about was a tender, flaky sea bass, pan-seared and served atop perfectly cooked, vibrant tasting snap peas and summer squash. The seasoning was also very subdued, but just right for this protein, as was a butter sauce with a soft texture and lovely acidity that synced up well with the sweetness of the vegetables. That light, delicate dish’s polar opposite, a mammoth serving of mac ‘n’ cheese, was also quite good. The best thing about it was the fact I can describe it as “traditional.” By that, I mean it featured a cheddar-based sauce that, unlike so many sauces composed of fancier and more esoteric cheeses, didn’t break and tasted like what most identify with and are seeking when they order this bowlful of Americana. A base model mac is always available at Uptown, as are daily Mac du Jour specials. 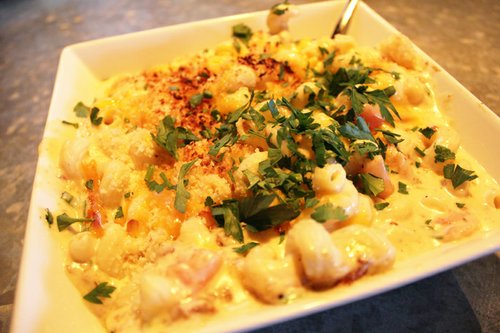 When dessert came, I have to admit, the bacon crème brûlée sounded fun, but we went with a pistachio bread pudding that, had I ate as much meat as I usually do, I probably wouldn’t have had the belly space for. That would have been a shame since we ended up devouring it. The pudding was eggy, fluffy and just sweet enough. Additional sugar and warmth came from salted caramel, while countering cool was provided by a scoop of vanilla ice cream. Simple and traditional once again registered as delicious. Delicious enough that I decided to give this pescatarian thing another go-round the following day. 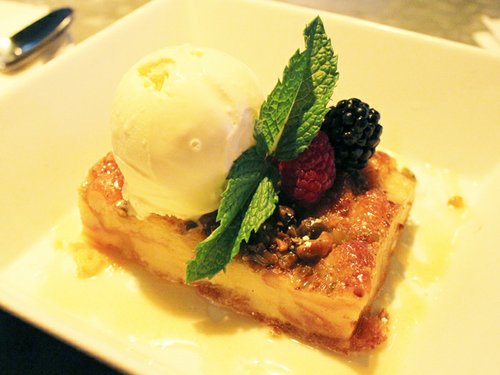