When I hear a statement like that, my food writer alarm sounds. Coworker, stranger, friend, or foe, I have to ask for the subject of such a major compliment. As San Diego’s number of eateries rises, the fave new haunt accolades get tossed around much less frequently and after application of much greater scrutiny. Still, over the past couple of months, one place has garnered easily three-fourths of such reviews from people I’ve crossed paths with from foodies to industry insiders and fellow journalists—True Food Kitchen (7007 West Fashion Valley, Suite 394).

When I heard the restaurant was opening, I was excited—not by the food they would be serving, but by who would be serving it. As I reported in May, Nathan Coulon—former executive chef at Quarter Kitchen and Modus Supper Club, and member of the chefing family behind the long-gone yet far-from-forgotten Belgian Lion Restaurant—returned to town to open Mission Valley’s link in the True Food chain at the Fashion Valley mall. In addition to being a good all-around guy, he’s always made food I’ve enjoyed eating. That said, I wondered how enthused I’d be able to get over the fare at his new place.

Based around the principles of an anti-inflammatory diet developed by Dr. Andrew Weil, True Food Kitchen’s offerings are…gulp…healthful. Certainly, food that’s good for you has its merits, but “healthy” isn’t an adjective that gets the saliva glands working. But rave reviews from people of all walks of life help get the old stomach growling. So, after way too many weeks of failing to find time to check out Coulon’s house of wholesomeness, I finally made it in. The timing was perfect, actually. I was coming off two consecutive days of purely pescatarian eating, and jonesing to take things to the next level—going vegetarian. This was the perfect place for it.

The menu, which includes items with heavy Mediterranean and Asian influence, has to be a dream come true for those seeking vegetarian, vegan, organic, and gluten-free options. It took me ten minutes to decide between a number of appetizing items. In the end, I started out with edamame dumplings. Upon ordering, my waiter, a knowledgeable young lad who was happy to answer any questions I had (pretty important in a place like this, so that was very much appreciated), informed me I’d managed to select the one dish on the menu that incorporates butter and heavy cream. 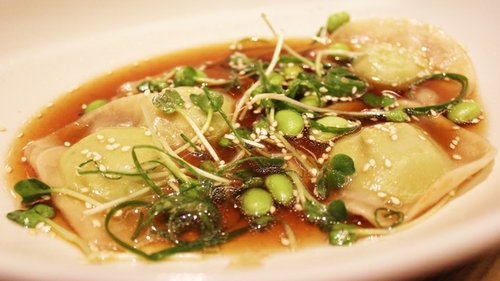 The dumplings did a much better job at being good than I did. That butter and cream is added mashed potato-style to a puree of edamame (an ingredient I’m actually not a huge fan of, but loved in this dish) that serves as the filling for gluten-free pasta raviolis served swimming in a sweet soy-based broth with just the slightest bit of twang in the finish, and added viscosity and savoriness from a drizzle of truffle oil that goes well with whole edamame. The pasta is a bit gummy where it doubles up along the dumpling’s edges, but other than that, the dish is delightful. 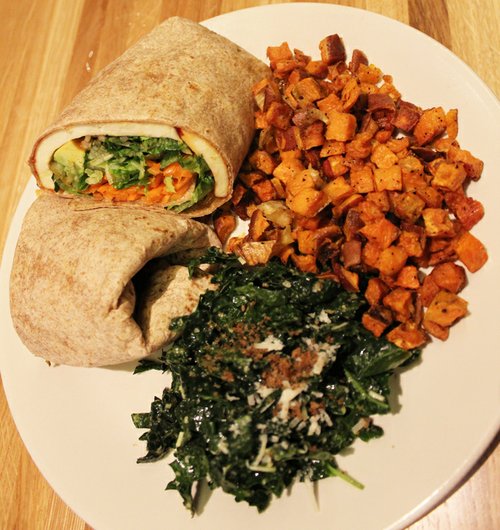 For my entrée, I chose a bahn mi wrap. In place of succulent, highly seasoned meat, the protein base for this wrap was marinated, barbecued tofu. While the tofu didn’t scream B-B-Q, it tasted sweet and melted in my mouth amid cool, crispy lettuce and carrots. Thanks to some heavy spicing, I didn’t miss the meat nor the abundance of bread that usually takes away from traditional bahn mi sandwiches’ overall flavor. If all veggie/vegan fare was like this, I’d eat that way a lot more often. 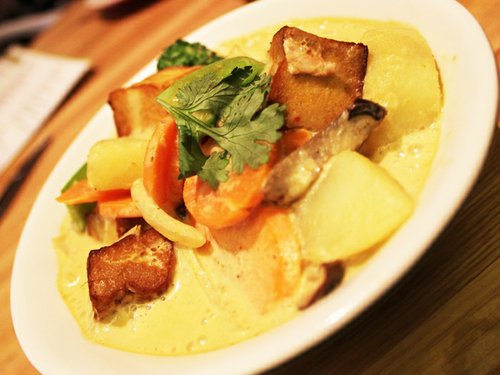 In addition to sides including a sweet yam hash and a tart kale salad with an interesting banana-like finish that reminded me of a Bavarian hefeweizen (ask for both and they’ll give you half portions of each), I also sampled a half-serving of a panang curry with tofu. I probably should have started with this dish as it was a little less spicy than the bahn mi and featured layers of underlying, more subtle flavors. Even so, I did like it, though I felt the tofu, potatoes, and vegetables were cut too large, and there was far too much under-seasoned brown rice. Even so, it's a quality dish and a far cry from most of the bland dishes that give healthy food a bad name.

To my surprise, I left True Food Kitchen understanding why so many would be so stoked about it, particularly those for whom dining healthily is more than a three-day experiment. In addition to having good food and a wide breadth of dishes and dietary options, the place is lovely in its modern farmhouse chic décor, and the prices are reasonable. It's nice to see it drawing business away from it's neighbor, temple of gluttony The Cheesecake Factory. A sign of the evolution of San Diego's dining scene? I think so.