Spurred on by a meat- and poultry-less meal with a pescatarian friend the night before, I decided to go the fish-and-veggie route the following day when I met my wife for lunch in University City. Due mostly to geography and hectic schedules, we don’t get the chance to lunch together all that often, so when we do, we try to make it count. Our method for making the most of the mid-day this time around was checking out UTC’s recently installed Tender Greens (4545 La Jolla Village Drive).

We have been fans of Tender Greens since the chain brought its first location to Point Loma’s Liberty Station development. That spot offers a level of consistent freshness via locally-procured produce and thoughtfully-sourced proteins and artisanal ingredients that’s unparalleled among other quick-service eateries. It would be someplace we frequented if we lived closer, so we were happy to have the new Tender Greens arrive roughly a mile from the missus’ workplace. 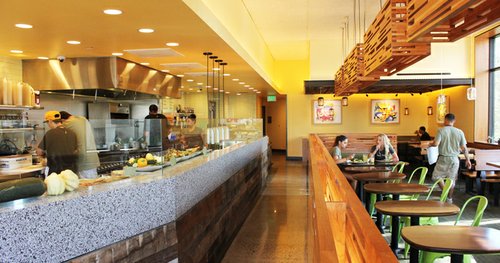 Like many who keep their eye on the local dining and Slow Food scenes, I am familiar with the efforts of the guys behind the scenes at the Liberty Station shop. At first, I thought one of them, Pete Balistreri, was helming the UTC operation. As it turns out, it’s not him, but Peter Balistreri, Pete’s first cousin, who’s in charge. Peter has worked under Pete for the past eight years and considers his cousin his mentor. Pete’s still overseeing things, but the new store is 100% Peter’s responsibility. Already, he’s introduced new menu items that aren’t available anywhere but UTC. We made a point of ordering some of those unique dishes in order to get the most local flavor from a spot devoted to local flavors. 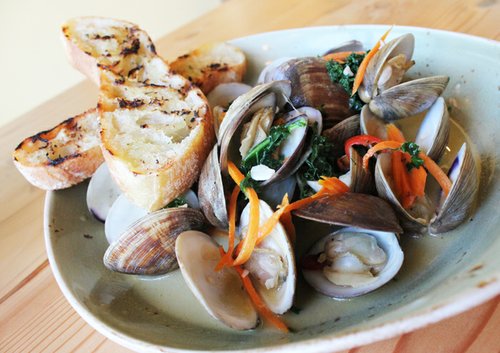 In this case, it meant ordering the fruity Harvest salad (a Thai Shrimp salad is also available exclusively at the UTC store) and a plate of “steamers,” clams and mussels steamed in an aromatic broth. Peter switches up the ingredients used in the steamer dish on a consistent basis. On the day we were there, they received Thai treatment. Garlic, ginger, cilantro, plus basil and chilies of the Thai variety added flavor to a coconut milk-based broth finished with Stone Brewing Company’s Cali-Belgique Belgian-style India pale ale. The clams were clean and pristine. The ginger and basil brought on plenty of white pepper-like spice and earthen sweetness, though the broth itself was tame, seeming to indicate the chilies didn’t really take. Still, there was plenty of flavor and enough bread (two grilled slices) to absorb the leftover liquid.

The Harvest salad was like a farmer’s smorgasbord presented on a bed of young, leafy, stone-fruit vinaigrette-dressed Scarborough Farms goodness. The items change with the seasons. Ours included grilled peaches, thin slices of Asian pear, and red grapes, all of which brought on different levels of sweetness that were countered nicely by tart Drake Family Farms goat cheese. Roasted almonds added a nice crunch. It embodies what I love about Tender Greens—fresh fruit served raw or lightly cooked with minimal, tasteful adornment. It’s the type food that makes you feel good about it, both as someone who wants to eat healthy and support local farmers. 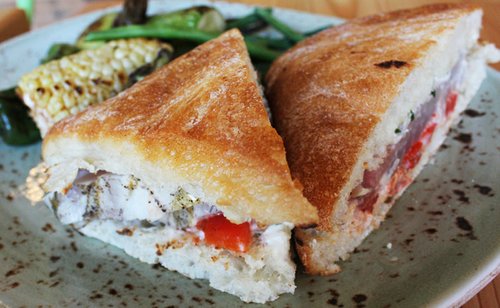 To gauge consistency from one location to another, I ordered herb-brushed albacore tuna served on hard-shelled ciabatta brushed with a creamy aioli and topped with roasted red bell peppers. The peppers were sweet, but the star of the show—as billed—was the fish. I love the fact heat barely touches the tuna. Tender Greens serves albacore rarer than any place I’ve had it. As a result, it tastes like you’re eating a gift from your friend’s recent fishing trip and has a texture that’s soft versus out-of-a-can dry.

We were pleased to find quality and ethos intact and in keeping with Tender Greens’ standards. In the near future, Peter is looking to put out Pete’s charcuterie, plus a cheese board consisting mostly of fromage he will create in-house (he’s currently awaiting the arrival of a proofer). What he already has in place that’s very impressive is a bottle-less beverage system. Having glass, in addition to being eco-friendly, is cheaper for the business as well as its patrons. I’ll drink to that. And I’ll certainly return now that I have a Tender Greens much closer to home.