Despite the fact that I'll leap at the chance to eat something while it's still alive, I love a good vegetarian meal. It always makes me feel like a better kind of person to eat a meal containing nothing but plants. Whether or not that's silly, I was excited to see a new place open up in my neighborhood that caters to herbivores.

Most impressive about Plumeria is the interior decor. Tastefully done in hues of violet, the walls have been adorned with floral prints and the atmosphere is incredibly soothing. I would believe that the Buddhist monks I saw entering the place when I recently passed by will find the inside to be a veritable culinary sangha. 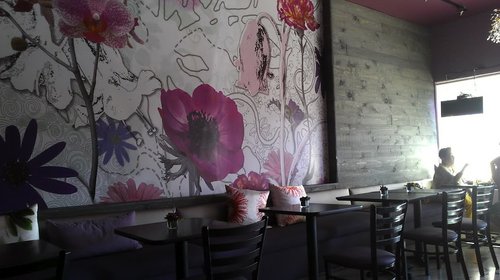 While it's not clear from without, Plumeria is a Thai restaurant and the menu items are all familiar dishes. I started a meal off with some cheesy wontons ($4.95) which seemed to be a vegetarian riff on crab rangoons that substituted water chestnuts for the shellfish. The five fried snacks mostly tasted of cream cheese (in the best rangoon tradition) rather than the crispy bits of chestnut I had been anticipating. Tom kah soup ($3.95), normally a favorite of mine, was a bit one-note as the coconut broth wasn't quite rich enough to stand up behind the dominant flavor of lemongrass. 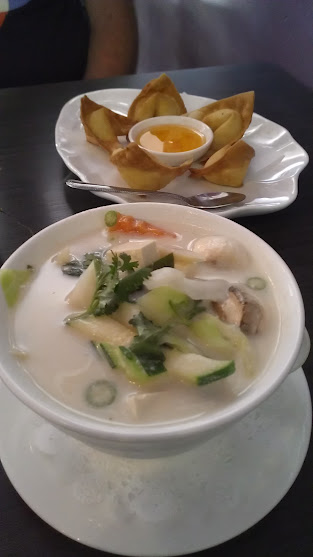 Entrees sat in the $8-$11 range, which is perfectly affordable although a dollar or two north of the competition on average. A panoply of ersatz meats stands in for the genuine article so the dishes aren't devoid of protein. The mock meats are most likely some combination of vegetable proteins and wheat gluten. Frankly, in a stir-fry situation the difference between real and fake meat is often academic in terms of flavor and texture.

An order of Pad Thai with vegetables contained egg, though I was warned of that lest I break vegan conduct on accident. The noodles were on the sticky side and the dish had a basically sour flavor that made it seem...disingenuous is the word that comes to mind, though I don't rightly know why. Another dish, yellow curry, evoked memories of the tom kah soup in that the coconut flavor in the broth wasn't as up front as it could have been. 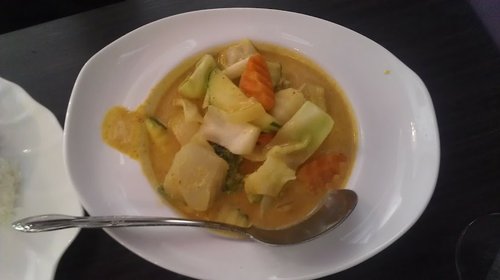 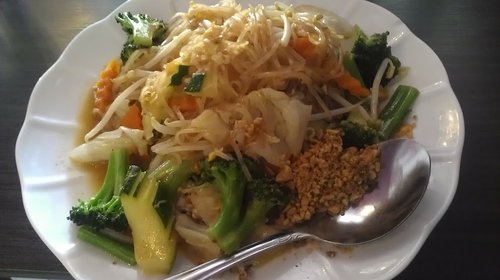 Plumeria is saved by its vegetarian cuisine. In a head to head competition, the food doesn't stand up against the best of what's available from other Thai places nearby. The decor is infinitely better than most places, however, which counts for something and those who eschew carnivorous restaurants will find solace in the vegetable-laden menu.