The Guamanian restaurant situated in a small, Mission Valley strip mall seems to have a pretty steady client base of local Pacific Islanders, at least if the crowd inside the place over the weekend was any indication. "Chamorro" is the demonym for the people of Guam and the Mariana Islands, and the cuisine of that culture bears some resemblance to Hawaiian cookery (which is probably more familiar to many people because of places like L&L Barbecue), albeit with a few noteworthy differences.

I ordered a Spam musubi with red rice, which gets its color from annato oil, because I have a soft spot for the little spiced ham sushi snacks. Widely available at gas stations and restaurants in the Pacific nations, Spam musubi is a killer snack food and an excuse to eat the oft forbidden SPiced hAM from the Hormel corporation. Chamorro's musubi had a bit too much nori (which was itself a little tough) on the outside so it was difficult to bite through, but was otherwise as expected. 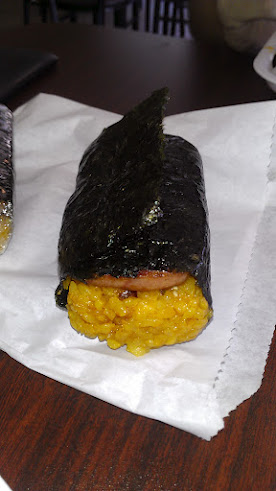 Entrées were served with rice and mac salad in the island style. Kalua pig, a dish of pork and cabbage that's familiar to me from Hawaiian restaurants, was too watery, but the flavor was good. Simply draining the meat before serving would have made it just fine. A plate of chicken that had been braised in spiced coconut milk was a serious undertaking. All dark meat, and plenty of it, the chicken was somewhat spicy and very rich from the coconut broth. 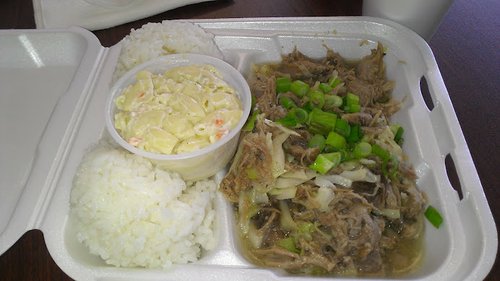 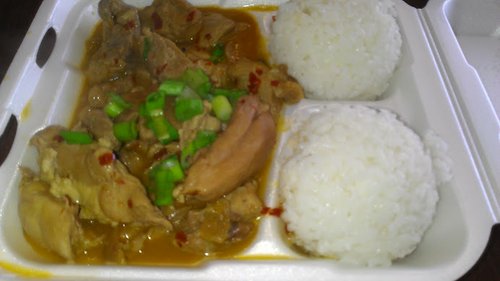 Everything was served super take-out style, even if not ordered to go, and prices on all the entrées were held under ten bucks. The Chamorro Grill isn't fancy by any means, but it definitely serves up huge plates of food on the cheap. Anyone who likes Pacific Islander cooking will be able to achieve satisfaction for not a lot of loot.

Maybe the best part of the meal was the hot finadene sauce. I looked it up later and it turns out it's a mix of vinegar, soy sauce, and chili peppers. I had never had this before but it was incredible on plain, white rice. 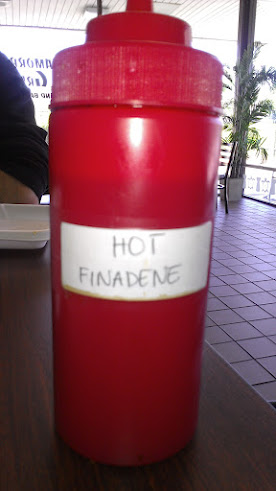