All the sushi places within five minutes walk of my casa were closed the other day. All of them except, Ichiban (1449 University Avenue), that is. But this isn't the story of "the little sushi spot that saved lunch," no, it's much more of cautionary tale. Maybe it's the dim lighting, maybe the lack of climate control, perhaps it's the off-color decor that makes me think of a hospital waiting room; something about Ichiban just doesn't sit right with me.

Yet I was willing to overlook all those things for the sake of Spam musubi. Ah, yes, Spam musubi, little shingles of griddled Hormel ham, loving bound to huge patties of sushi rice by a thin strip of nori, most perfect of snacks and the kind of thing that only the Hawaiian mind could have invented. I gave Ichiban one last shot for you, Spam musubi. 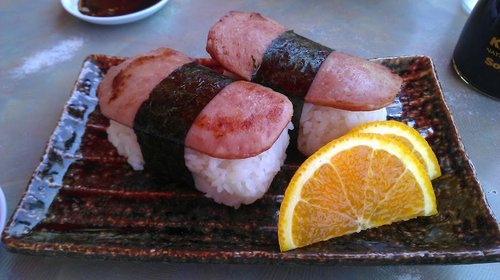 Betrayal! The Spam was too thin, there was no trace of teriyaki sauce, and the rice was gummy. $3 was too much money to ask for inferior musubi. Better Spam snacks have come wrapped in plastic and wilting under heatlamps at island convenience stores.

Little better was a chicken bowl that was available as a lunch special for $4.95. The meat and vegetables coated in a thick garlic sauce had an unpleasant, fungal taste from mushrooms that had gone to that spongy, past-their-prime place. 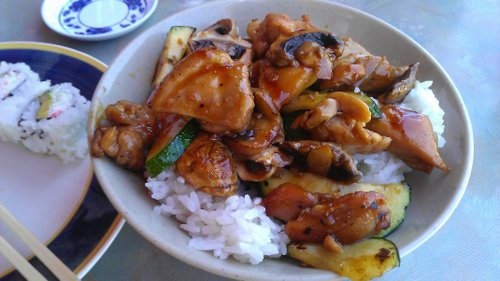 It's rare that I would issue an injunction against going to a restaurant. Most shops are able to distinguish themselves in some capacity, however small it may be. Ichiban lacks redeeming qualities. I've tried the sushi and found in highly inadequate and the Spam musubi could be considered a last strike. I can't in good conscience recommend Ichiban Sushi to anyone.