Lunch dates with my three-year-old daughter are usually a casual affair. I’m not a fan of the big chain fast food type places, and I can only eat so many Target hot dogs or diner sandwiches. Therefore, I count myself lucky that as much as I love sushi, my daughter loves teriyaki chicken and steamed rice.

This week, we decided to check out a place in the neighborhood that we hadn’t yet tried. All I knew was that it's called Sushiman and that it's in Eastlake. When we arrived, I was pleased to see that we had come on the right day. One of the two daily specials was the teriyaki chicken plate ($6.99 on Mondays, $7.99 every other day).

Though the special price was higher than I usually pay for this dish, it came with two gyoza, rice, salad, and miso soup. I figured it would probably enough for my daughter and I to share, so I ordered it along with a four-piece spicy tuna roll ($2.69). That, plus two drinks, and our total came to $14.20. 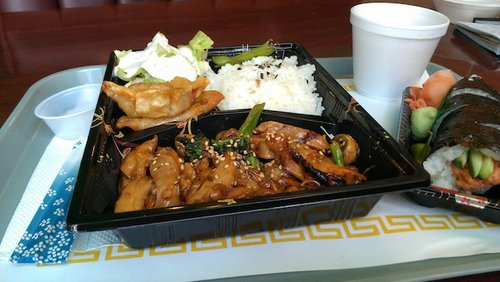 Inside, the restaurant looks like it does more take-out than dine-in business. Aside from two large booths and two small tables, the place is a big square of wide-open space. While we ate at one of the booths, people came and went with take-out bags. 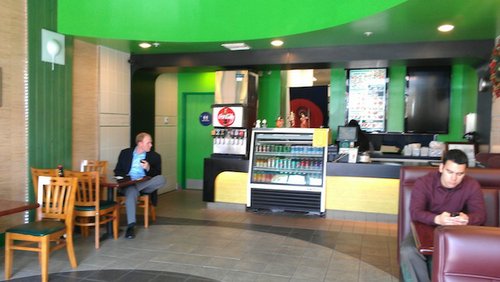 Smart phones were made so you have something to do while you wait for your take-out. 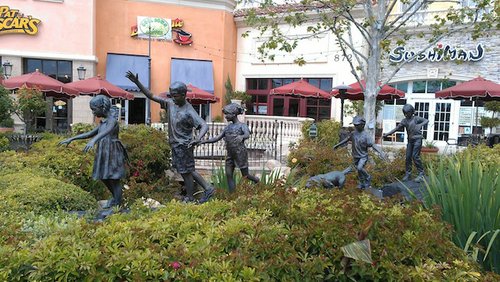 For a strip mall, this is pretty fancy.

The teriyaki chicken was not a big hit with the little one. She prefers chicken, teriyaki sauce, and white rice only. This dish had mushrooms, carrots, and sesame seeds, and the sauce was a tad peppery for her. I had to scrape all carrot remnants from the chicken before she’d eat it.

Won’t be doing that again.

Although I liked the flavor of the chicken, even with the extras, it wasn't worth the price. The gyoza was dry, and the pool of dressing was a poor attempt at hiding limp lettuce. I enjoyed the spicy tuna roll, but it wasn't any better than it is at the handful of other sushi joints nearby.

If I'm ever dying for sushi while shopping at our neighborhood Trader Joe's, I might be back, but for now, I'm not in a big hurry.