Fashion Valley restaurant has a good deal on a huge plate of food.

I don’t spend much time in the mall, not being a big shopper. But I’d heard that Love Boat Sushi was pretty cool. It’s in the mall, so to the mall I went. Technically, there are Love Boats all over the county (RB, San Marcos, and Oceanside), but Fashion Valley is the location convenient to me. In a rare moment of technological failure, Google led me to the wrong side of the mall and I wandered around for a while, grumbling. Found it eventually, and it wasn’t very noticeable, just a surreptitious door at the corner of a building.

Inside, the decor was dark and moodier than the average corner sushi spot, made to look upscale in an effort to convey a sense of “you’re not at Sushi Deli.” 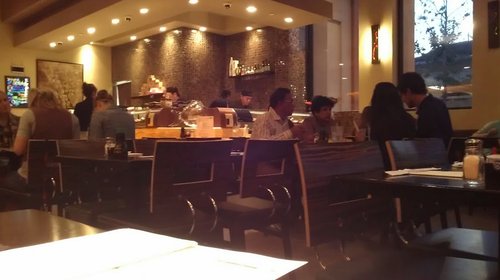 Really, it was a similar phenomenon to the aforementioned bulk sushi warehouse where the line reaches around the block. The biggest advantage was that there was no line, no waiting, and no fear of breaking the bank for the sake of an epic sushi pig-out.

Love Boat’s big claim to fame is the eponymous sushi spectacular. Served in two sizes, the Love Boat contains chicken and beef teriyaki, California rolls, spicy tuna maki, tempura, and sushi/sashimi in the common yellowtail/tuna/salmon combination. For $45.95, my friend and I ate to utter completion. First, they brought out miso soup and a steaming skillet of teriyaki. 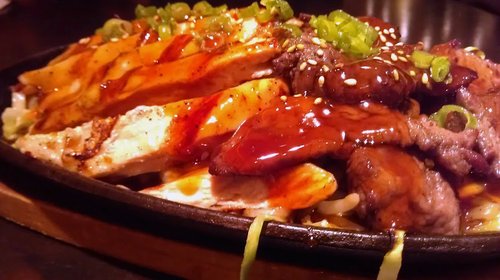 The big sushi plate followed, laden with vegetable tempura, rolls, sashimi, and nigiri. There was enough food that I balked for a half-second on receiving the platter. That doesn’t happen very frequently.

Objectively, the food was very average, only slightly nicer than Sushi Deli and far from the “good stuff.” The fish was served much too cold and the rice beneath the nigiri didn’t have any character. Tadokoro, Ota, Akinori, and company don’t need to start sweating yet.

The lunchtime crowd could benefit from the 20+ items under $10 on the menu, which expands well beyond the bounds of the gigantic Love Boat. $9 for a sesame chicken plate with gyoza, salad, rice, and soup isn’t too shabby for a quick lunch, for example.

Still, it’s all about the gorging at places like this and, in that respect, Love Boat delivers.