RK Sushi has the disadvantage of being down the street from super-popular Sushi Deli #1 at the Hillcrest/Mission Hills border. Comparisons are inevitable and Sushi Deli is almost always going to come out on top for whatever reason, it's just that much of a scene. For all intents and purposes, RK Sushi is identical to Sushi Deli in terms of food, but greatly superior in terms of parking. The restaurant has a parking lot that's equal to the capacity of the dining room. No mean feat in a neighborhood where real estate is a prime commodity.

Prices at RK are on the cheap side. Traditional rolls start at $3 and specialty rolls are $6-$10. Nigiri is $3 for two pieces and 5 piece sashimi plates are $6. I tried some tekka maki and a spicy salmon hand roll. In both cases, the rice had been mashed together with excessive vigor behind the bar and the rolls had become very chewy. I don't ask for greatness for $3, but I also can't say I actively enjoyed them. The nigiri was a little better because the rice received less maltreatment. My snapper was shaved very thin and the ahi had been seared, which isn't to my liking but isn't exactly bad, either. The real surprise was the "white tuna" that was on the chalkboard by the door. I have been seeing this stuff pop up every now and again, so I ordered some. 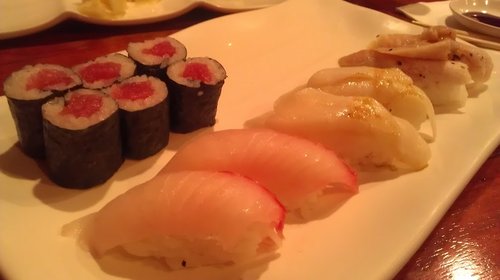 "white tuna" in the center

The fish itself was perfectly snow white, like halibut or cod, but had the firm texture of a fast swimming fish. It was rich and silky smooth, dressed with a splash of ponzu and more flavorful than the lean tuna that's usually available at plebian sushi restaurants.

By the time I got home, curiosity got the best of me and I started Googling. All I knew was that it couldn't be tuna, because tuna isn't white like that.

It turns out that this is a source of confusion for others, too. As near as I can tell, the phrase "white tuna" is often attributed to two different fishes: the escolar and the albacore tuna. Albacore isn't white though, it's a very light pink, so I suspect that the fish I was served was escolar.

Escolar has a very bad rap. Because the fish can't metabolize certain "waxy esters" in its diet, its flesh can contain large amounts of those chemicals, the ingestion of which can have severe gastrointestinal effects in humans. We're not talking fugu, here, but unpleasant stuff.

The problem is that escolar is very tasty. Much better than the not-special tuna that's on the menu at a lot of sushi bars. Conventional wisdom says to keep escolar consumption under six ounces in any given meal, so a couple slices of sushi shouldn't be any kind of problem.

If "white tuna" is on the menu, the easiest thing would be to ask what it is. If the staff doesn't know, then judge by color. If it's pink-ish, it's probably albacore. If bright white and firm, maybe escolar, in which case go for it and enjoy living dangerously!

What you don't know about fish ain't worth knowing

Sometimes the best answer is just "eat your sushi and don't worry about it?"