I head south and here’s this feller Ferrer holding a hand-painted sign. 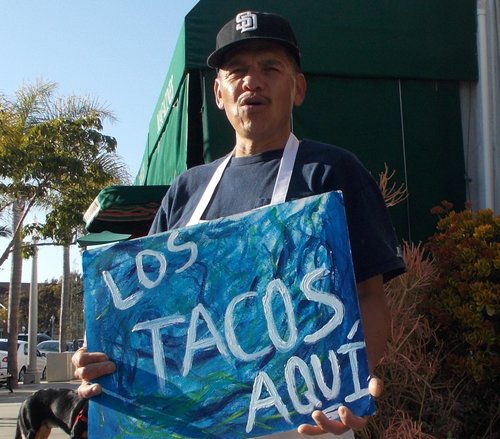 Look beyond him, and here’s a whole taco stand set up through the sidewalk patio railings at Costa Azul (Costa Azul Grill & Rotisserie, 1031 Orange Avenue, Coronado, 619-435-3525). 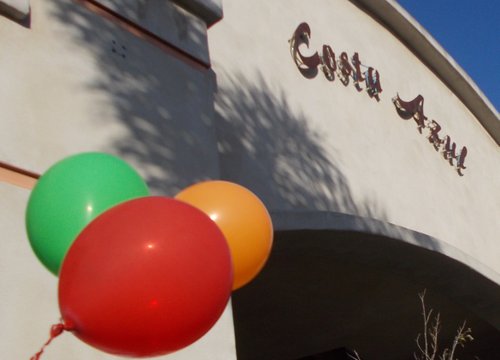 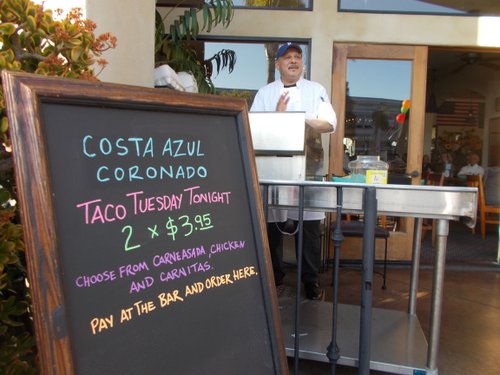 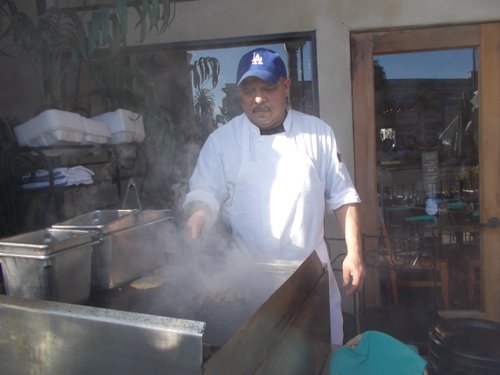 ...has set up a hot plate, a blue-cloth table, volcanic molcajetes filled with red and brown and green salsas, limes, radishes, onions, cilantro, lettuce, the whole taco bag of tricks. 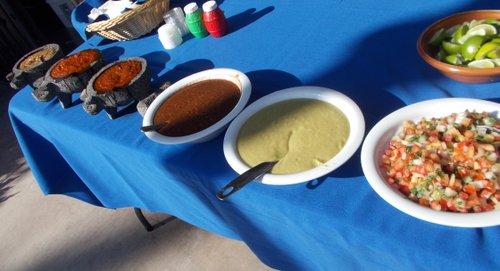 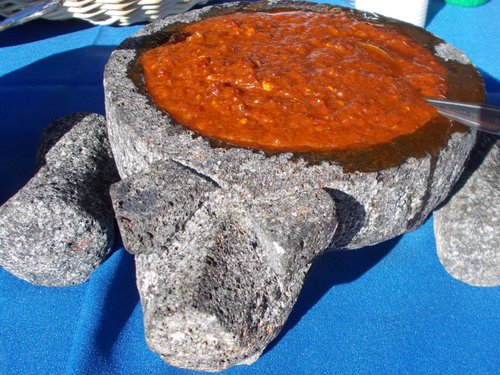 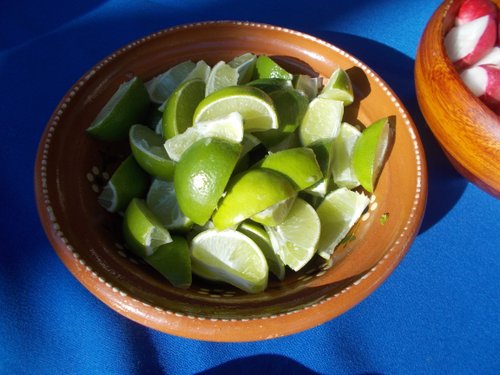 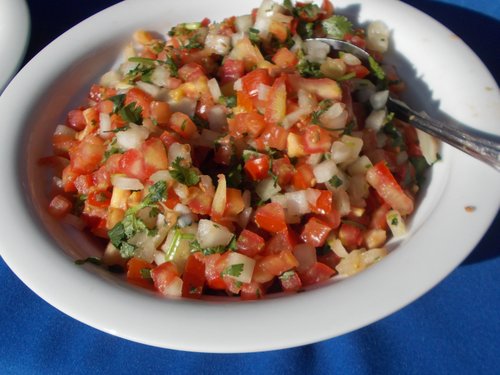 I trust her. She’s the one told me about La Ermita, one of my greatest taco finds ever in Tijuana. 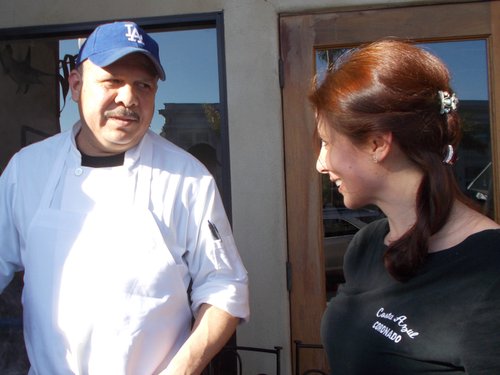 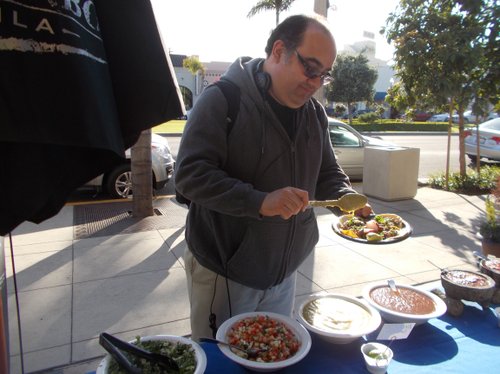 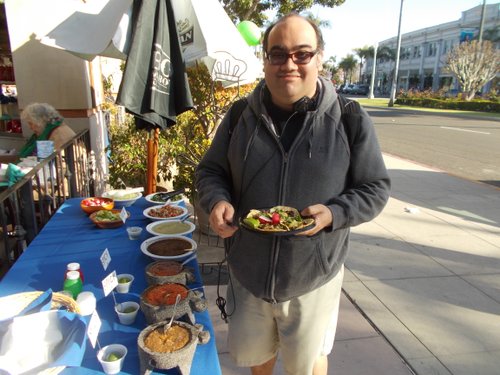 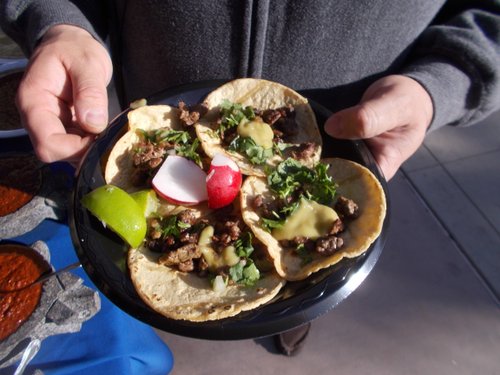 He tosses a little chunk of chorizo on the hot plate. The smoke smells spicy.

You can see: people are kinda surprised to hear Ferrer shouting out “Tacos! Tacos! Tacos!” here in the land of Admirals and rico-suaves. Amazing what having the food right here on the street does to people. They stop, readjust their radar, start remembering other days, other places.

Whatever, crowd’s gathering. I need to say what I want quick. 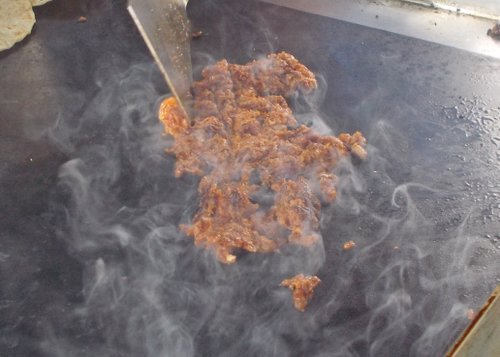 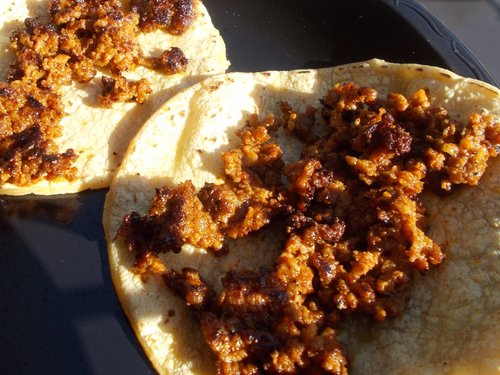 It’s Mary Ana who passes it to me. Just because she’s between me and Miguel, through the smoke there.

"The green,” says Miguel, when I ask him which salsa’s best for chorizo. “It’s a little bit hot. Tomatillo, serrano chili, and avocado. We peel it and blend it right here.”

So I pile on onions, cilantro, the green avocado salsa, and top it all with a squirt of fresh lime. 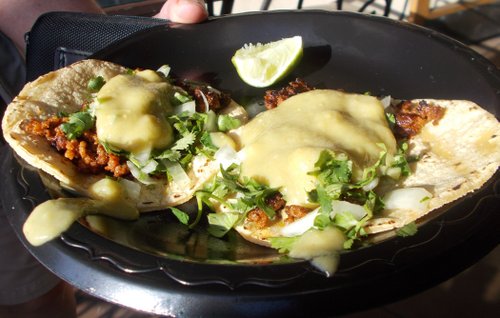 Was the day when Villa Nueva, a block north, did this. The charcoal, the smoke, right on Orange.

Looks like the taco party’s moved south, one block.