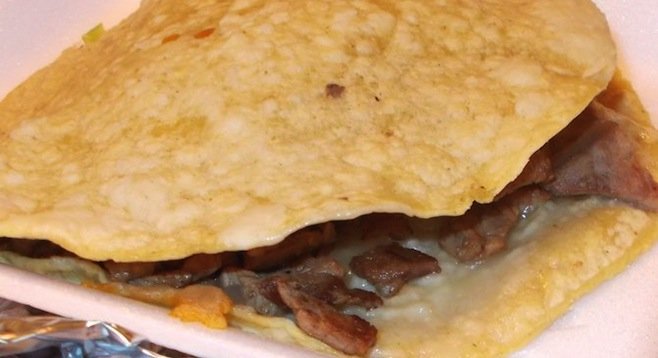 But what’s with the Health Department shutting down outside cooking at Mexican eateries?

Aah. I can relax. Sunset, cocktails, music. Love it.

Okay, so the cocktail is guayaba juice (guava, totally delish, $1.80), the appetizer’s gonna be a gordita ($4.15), and the place me and other customers are sitting at is chairs and tables under an open white wooden shelter in a kinda parking lot. 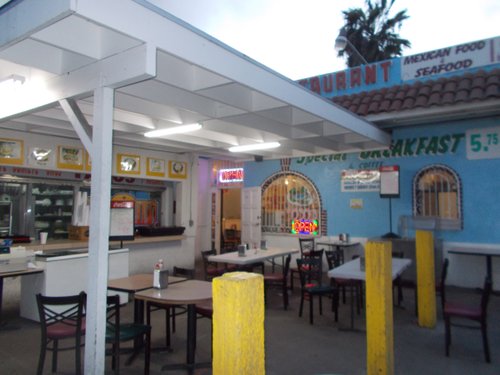 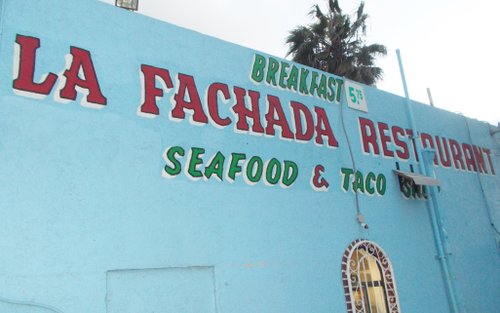 ...opposite the police station at 25th Street (#20, 25th Street, Logan Heights, 619-236-8566). I’d jumped off the Orange Line trolley (25th Street stop is yards away) jes’ because I thought I could get something here that Carla’d like and I could chomp part of now – and probably spend less than if I went got something at Von’s.

link textIan and I have both been here before. About a year ago he was getting into their cabeza and tongue tacos. They have a much bigger menu in the blue main building, but tonight I’m sticking out here for their outside “truck” food.

“The gordita is deep fried tortilla with meat, cheesecream, lettuce and cotija cheese on top,” says Vicki the cashier. “The mulita is two grilled tortillas with meat, white cheese, onions and cilantro sandwiched inside.”

I stop her there, ’cause any further and I’ll forget the first two. I order one of each, but mine, the gordita, for here. Jes’ too danged hungry. 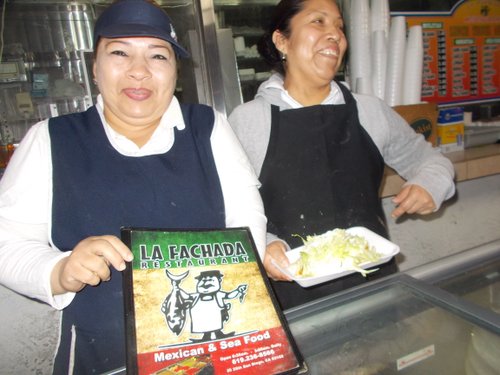 Vicki the cashier with Marta the cook 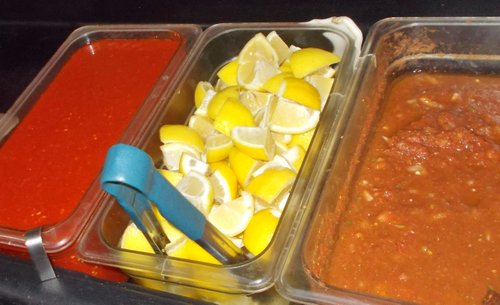 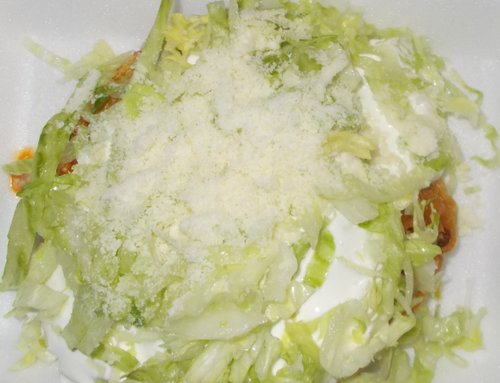 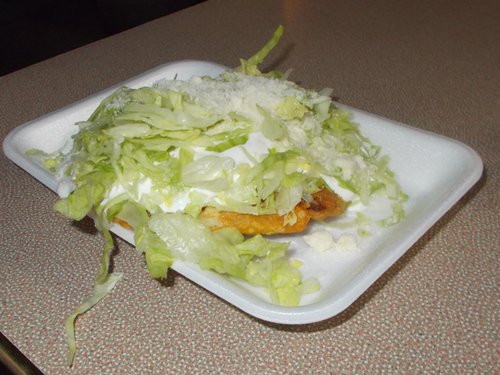 And a pot to fill with beans at the outside grill where a big saucepan’s steaming above glowing coals. It’s got beans in their juices inside. And on a tray next to it, roasting slowly away, green jalapeño peppers and onions. I grab some of all of them.

What a combo. The gordita’s specially good, and filling. It’s crisp underneath, and the al pastor pork and white cheddar is covered with cream and lettuce. I go get a pot of green jalapeño hot sauce, pour it over, and have at it. 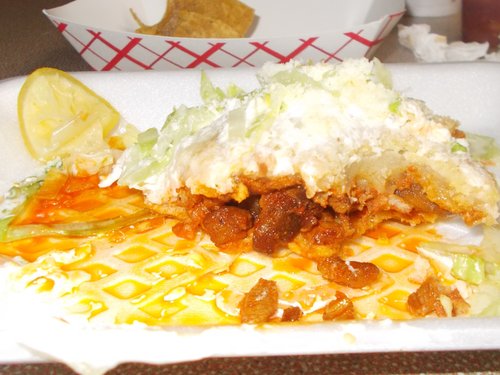 Love the combo: hot, picante, that flavorful pork, and the crisp skin, refreshed by shredded lettuce, and sweetened by sucks at the guava juice.

Main difference with last time I was here though: they used to have an actual food truck parked in the garden, and tables out around it, and meat and onions and peppers and frijoles smoking on open grills. You couldn’t walk up 25th at night without being totally seduced by the smoke and the savory smells. It was always crowded.

“The Health Department said we had to have a permanent structure, and cooking indoors.” says Jose, the boss. “It might be their tradition, but it’s not a Mexican tradition. We lost a lot of customers.” 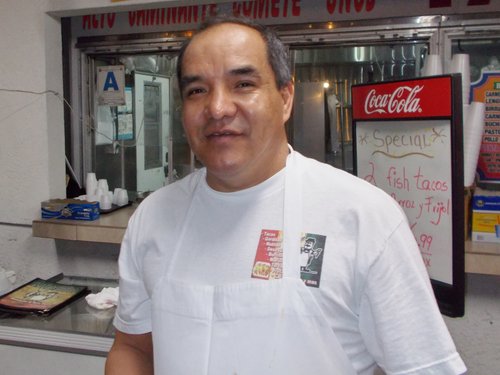 Dang. Since when is cooking and eating outdoors a threat to health? The authorities did the same with a food truck down at the Iris Avenue bus and trolley stop. They could only keep going if they took their savory smoke indoors and took away all the tables and chairs.

Is this crazy or what? Somebody ought to go tell those health fellas that this here is a border town. Ya gotta give a little to live a little. 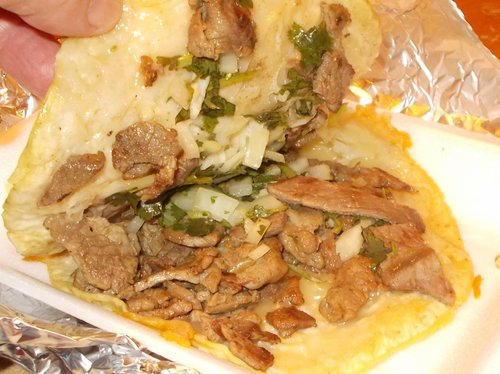 I brought a co-worker here for lunch today from your recommendation. Almost missed it because it sits so far back from the sidewalk. Went up and down Imperial and had to ask a pedestrian. Finally saw the blue bldg behind the fence. Had a carne asada gordita and Posole soup, which is hard to find done well in San Diego. Everyone serves Muendo but Posole is a rare find. We both liked the gordita and he preferred it over the mulita he had orderd as well. We both said we would come again and it's good to know they're open until 3am.

MsSheree: Belated thanks. So glad you went. I've got to try that posole! But apart from the food, I just like the people there. Great in the evening too. -Ed