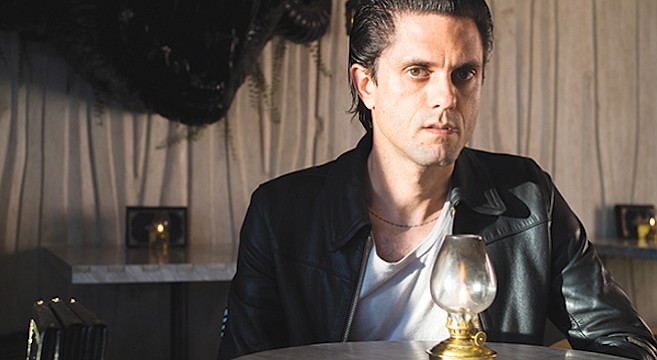 Fast, punchy, straight to the point

Chances are good that you will see Justin Pearson at Kindred.

Three One G label owner, promoter, bassist, and vocalist Justin Pearson has been wrapping up a Dead Cross LP on Ipecac Recordings with the addition of Mike Patton (Mr. Bungle, Faith No More, Fantômas) on vocals to accompany Dave Lombardo (Slayer, Fantômas, Suicidal Tendencies) on drums, Pearson (RETOX, the Locust, Head Wound City) on bass, and Michael Crain (RETOX, Festival of Dead Deer, Kill the Capulets) on guitar. In addition, Pearson and Planet B bandmate Luke Henshaw have been hosting a monthly Three One G/Plant B night at Blonde Bar highlighting local and touring spazzy and experimental acts. Established in 1994, Three One G continues to release local and international titles in experimental, punk, noise, and weirdcore, including recent albums from Doomsday Student (Rhode Island), Silent (Mexicali), Adam Gnade (Kansas), and Hot Nerds (San Diego). Like most of his music, his responses about his local favorites hit fast, punchy, and straight to the point.

Band of all time?

“Antioch Arrow’s The Lady is a Cat.”

Bar to hang out?