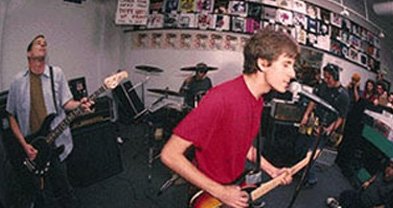 RIYL: Pitchfork, Rocket from the Crypt, Back Off Cupids, Hot Snakes, the Sultans

Drive Like Jehu was an American post-punk/post-hardcore band led by Rick Froberg and John Reis, formed in 1990. Froberg recalls “[John was a] cool guy with cool friends. Had a band. [We met at] Mariner’s Point Anarchy Picnic, 1986. I think we both liked RKL and Mystic releases — Don’t No, Dr. Know, Rat Pack, Manifest Destiny. But I turned him on to Blood Lake. John taught me to dress well.”

When Reis joined up with former Pitchfork bandmate Froberg, Jehu produced a melodic, pounding rock with angst-laden, rounded vocals that sounded a bit like Pitchfork but with a manic edge. The band toured in the early ’90s, which was great, because Jehu was a band that loved to perform, who knew that if they weren’t having fun, then the audience wasn’t either.

Rick Froberg told Fiz magazine in 1994, “All the music is designed for maximum physical gratification. When we started the band, and we were in Pitchfork — this is just my point of view — but we’d just play the song, and it would be a good song or whatever, but in Jehu, I think it’s aimed at a lot more enjoyment — we’re definitely more interested in getting our rocks off.”

In terms of style, Drive Like Jehu was often considered an emotionally themed band. This is worth mentioning given that in the early 1990s, punk-based music had fully branched into several subgenres, including Goth, industrial, and even grunge.

In the 1994 interview with Fiz, Froberg comments on the band’s “emotional” tagging. “That’s the one thing that everyone says — ‘emotional,’ and that’s not necessarily the case. It’s just loud or screaming or whatever. It’s just a necessary thing with this band.” It could be said that San Diego’s 1980s punk and hardcore roots were emotional, but only in terms of cultural or social anger and outrage. In the early ’90s, bands began venting feelings that didn’t necessarily have to do with society.

They released two full-length albums before disbanding in 1995, partly due to Reis's increased involvement with his other band, Rocket from the Crypt. The success of Rocket from the Crypt and of Reis and Froberg's later band Hot Snakes has drawn increased attention to their work in Drive Lke Jehu and led to a re-release of their influential album Yank Crime.

Posthumously, Drive Like Jehu's music has been cited as a catalyst for the reemergence of emocore and for the prolific San Diego music scene of the 1990s.

As youths growing up in San Diego, guitarist John Reis and singer Rick Froberg had played together in the post-hardcore band Pitchfork from 1986 to 1990. After Pitchfork's demise, the pair were joined by Mike Kennedy on bass and Mark Trombino on drums to form Drive Like Jehu. The band shared musical similarities with Pitchfork but also exhibited significant changes: Froberg would now play guitar as well as sing, adding a second guitar to Reis's lead. Kennedy and Trombino also brought with them a progressive rock influence from their previous band Night Soil Man. Trombino developed his studio skills by acting as producer and engineer for most of Drive Like Jehu's recordings, while Froberg acted as the band's artist and illustrator, creating artwork for their albums and merchandise.

The band released a self-titled debut album in 1991 through Cargo Records and Headhunter Records, gaining the notice of the emerging noise rock and math rock movements, which would later lead to their description as a link between these genres. This was also the period in which the Seattle band Nirvana experienced great mainstream success, leading many major record labels to turn their attention to underground American rock bands.

Both Drive Like Jehu and Reis's other band Rocket from the Crypt courted lucrative offers from major record labels, and eventually the two were signed to Interscope Records as a pair. During this time, Drive like Jehu released the 7" vinyl single "Hand over Fist/Bullet Train to Vegas" on Merge Records, as well as the song "Sinews" on a compilation of San Diego bands entitled Headstart to Purgatory.

At the time of signing to Interscope, Reis was touring with Rocket from the Crypt in support of that band's second album Circa: Now! Interscope quickly re-released Circa: Now! and pushed for Rocket from the Crypt to enter the studio and record their major-label debut, but instead Reis returned to work with Drive like Jehu, who released their second and final album Yank Crime in 1994.

The album was hailed as a stark improvement over their debut and the band embarked on tours of the United States and Europe.

The following year, however, with little fanfare, Drive Like Jehu disbanded. Reis resumed working with Rocket from the Crypt full-time, while Kennedy returned to school to study chemistry. Froberg and Trombino, meanwhile, both left San Diego. Froberg briefly played in the band Thingy before moving to New York to pursue a career as a visual artist and illustrator, while Trombino became a successful mainstream rock engineer and producer, working with artists such as blink-182 and Jimmy Eat World.

Following the band's 1995 breakup, Reis continued to front Rocket from the Crypt until 2005, gaining international recognition and resulting in increased interest in his work with Drive Like Jehu. A gradually growing audience began to pinpoint Drive Like Jehu's music as a catalyst for the eclectic San Diego music scene and the emerging national emocore scene of the 1990s.

Speculation abounded about the fate of the band and their recordings, spurred on by the fact that the members had never officially announced the band's breakup but rather had simply stopped playing together.

In 1999 Reis formed the band Hot Snakes during off time from Rocket from the Crypt. He recruited Froberg to provide vocals for the band, and critics were quick to draw comparisons to their work together in Drive Like Jehu. At this time Reis also launched his own record label, Swami Records, through which Hot Snakes released several albums before disbanding in 2005.

In 2003 Reis re-released Yank Crime through the Swami label, including on it the tracks from the "Hand over Fist/Bullet Train to Vegas" 7" and the Headstart to Purgatory compilation. During their final tours, Hot Snakes would occasionally perform the Drive Like Jehu songs "Bullet Train to Vegas" and "Luau," both from Yank Crime, during their sets.

Following the breakup of both the Hot Snakes and Rocket from the Crypt in 2005, Reis continued to perform with his other act the Sultans until January 2007, after which he formed the Night Marchers. Froberg, meanwhile, moved to Brooklyn New York and formed the Obits in 2006.

Mark Trombino moved to L.A. where, in 2013, he opened a Highland Park shop called Donut Friend. “You can get a Jimmy Eat Swirl donut at my shop,” Trombino says. Or a bacon-182, a Chocolate from the Crypt, or a Cream Syndicate, just to name a few. “A friend and I were bullshitting one night in a bar, and we came up with these ridiculous puns. I have more names than donuts.” The Rights of Sprinkle, for example. “But I’m not gonna do a Red Hot Chili Peppers donut. I hate that band, and this is my donut shop, right?”

Froberg and Reis are renited the band for a free all-ages performance at Spreckels Organ Pavilion on August 31, 2014, where resident organist Carol Williams opened with a solo set as well as playing with the band.

Late the following year, the band announced they'd headline the 2016 All Tomorrow's Parties festival, set to take place at Pontins in Prestatyn, North Wales, April 22–24, marking their first U.K. performance since 1994. The group was also to pick the festival’s lineup, but the ATP event was cancelled in mid-April,