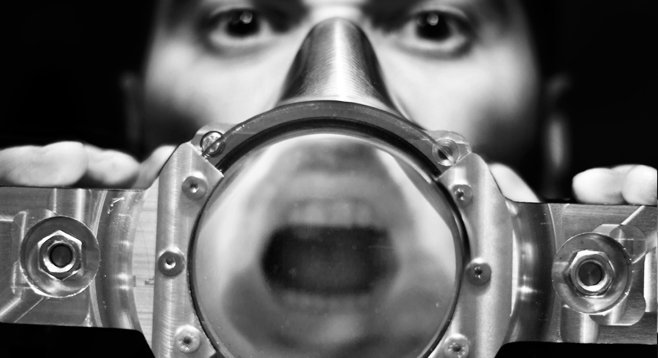 The tour opening up for Tool will continue as the bands make their way across Australia.

“It’s hard to find people with the same idea of what heavy is,” says Tristan Shone, the industrial drone-doom one-man band Author & Punisher.

“Yeah, the music is dark. It’s what comes out, but it’s kind of heartfelt. But some people think it sounds like nightmares.” Music from one of Dante’s seven circles of hell: ex-metal guitarist Tristan Shone, from New Hampshire, performs solo on a robotic assortment of repurposed machines that make a range of concentrated and often demonic sounds. “I have this tone in my head, and I keep trying to reinvent it, like maybe the way a guitar would sound playing through a combination of four really trashed amps. Maybe like late-’90s Deadguy, the Melvins, or maybe early Neurosis.”

Shone came to UCSD from Boston to earn an MFA, and he stayed. “That’s where my money comes from, by the way. I work as a mechanical engineer in a neurosciences lab.”

“There are a lot of ideas to what heavy is,” says Shone, who owns a machine shop in Little Italy. “You can be really smart about the way you’re heavy or really cliché when you’re heavy. It’s not a one-liner.”

For Shone, that means climbing inside a futuristic apparatus made up of DIY “drone machines” with names such as “Throttles” (a dual-pitch controller with force feedback and autopilot capabilities) and “Rotary Encoder” (a 300-pound metal disc that controls pitch based on the speed at which it is manually rotated) along with his more recently actualized “dub machines,” including “Rails” (a manual rhythm controller that looks like a robotic arm) and “Headgear” (a faceplate containing eight isolated microphones).

A surreal mash-up of man and machine, Author & Punisher becomes more of a performance piece in endurance than your run-of-the-mill guy-punches-buttons routine.

“The drone machines are digital but analog in nature, like a hand tool or old machine-shop tools. They make more droning, slow, heavy movements. The dub machines were kind of a reaction to that and were made when I was learning to use automated fabrication machines. I wanted to have more dynamics. I like some elements of dub — not the commercial, over-the-top dubstep — but I wanted more dynamic, fast-paced bass with more articulation.”

The result can be heard on his full-length, Ursus Americanus, released in April 2012 via Portland-based Seventh Rule Recordings. The album, along with the video for single “Terrorbird” (which climaxes with Pinback guitarist Rob Crow spewing blood), have attracted a lot of attention in international blogs lately.

Despite the album’s diabolical temper, Shone says his music comes from a “very positive place.”

“I’m not a troubled human being. I don’t have any desire for pain and suffering. Doom metal is combining a feeling of devastation with a moment of emotional inspiration. It’s very positive. Either way, you give yourself to this overwhelming sound.”

Finding that sound has been a long process for Shone, who grew up playing piano and later performed as a solo metal act on guitar and loop pedals.

“With [the drone/dub] machines, using my whole body makes more sense. There’s music happening when I’m moving. That’s why I don’t use loops. Something may be spinning and there’s still sound, but when you just let go, everything stops. For me, it feels more organic, even though the music sounds inorganic. There’s a little bit of a paradox there.”

Despite his penchant for electronics, Shone claims he isn’t your typical “tech guy.”

“Most of my machines are like 1930s technology — bearings, rods, gears. It’s just taken so long for people to consider the physicality of music. The thing about button-pushing is you can only see it from the user’s perspective. So, the question is: how can electronics companies make the performance aspect more visible?”

In the meantime, Shone continues to refine his craft while inventing new machines. His series of five acoustic facemasks, with names such as “Human Cud Bag,” “Blank Form,” and “Bass and Hiss,” made their debut at the La Jolla Athenaeum in March 2012.

Looking like something out of a mechafetish bondage film, the masks were played by a roll call of San Diego noise artists, including Bobby Bray (the Locust, Innerds), Braden Diottie (Pinback, Tarantula Hawk), and Sam Lopez (Zsa Zsa Gabor).

Shone’s next Author & Punisher EP Women & Children was released in early 2013, whereupon he embarked on a three-week tour of the UK and Europe in March. It won Best Hard Rock Album at the October 2013 San Diego Music Awards.

Late the following year, he began recording an album at Nodferatu's Lair in North Shore, LA for his new label Housecore Records, produced by label head Phil Anselmo, best known from the Illegals and Pantera.
“I went into the writing process with a new setup of both old Drone Machines, newer Dub Machines, and synth, as I have found combinations that work effectively together,” says Shone. The resulting album Melk En Honning was released in summer 2015.

On January 14, 2017, Shone collaborated with the Satanic Temple of Los Angeles for a live performance of his "Destruction Ritual" at a satanic mass held in L.A.'s Das Bunker. In March, he announced signing with the Album Leaf's label Relapse, as well as releasing a five-song EP, Pressure Mine.

After signing to Relapse Records, Author & Punisher released its fifth full-length in 2018, Beastland. The album was recorded at K Street in San Diego, and engineered by Tristan Shone and John Cota (Death Eyes). Additional recording was done in Las Cruces, NM with Jason Begin (vytear), with co-production by Braden Diotte (Neurosis, Tarantula Hawk), mixing by Kurt Ballou at God City, and mastering by Brad Boatright at Audiosiege.