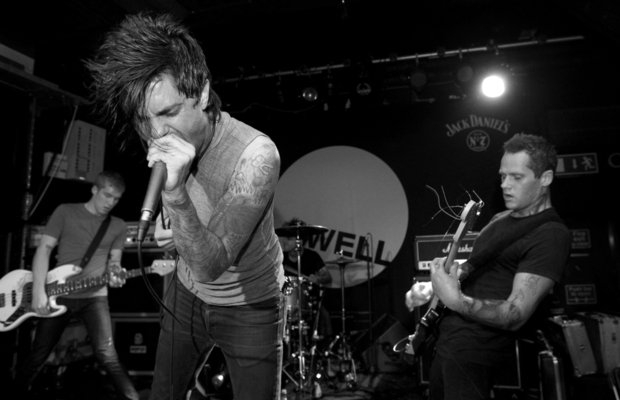 The band made its Casbah debut on Friday, January 7, 2011. A few months later, they signed on with Ipecac Recordings, co-founded by Mike Patton (Faith No More, Mr. Bungle), to release their debut full-length Ugly Animals.

“The Ipecac team is over the moon about working with ReTox,” said label co-owner Greg Werckman in a press release. “We think they are a perfect fit with our eclectic roster, fitting comfortably with other original artists like the Melvins and ISIS.”

Having released material on Ipecac with the The Locust in the past, ReTox now shares the roster with Orthrealm, Mouse on Mars, several of Zach Hill’s (Hella) projects, and most of Ipecac co-owner Mike Patton’s band projects (Faith No More, Mr. Bungle, Fantomas, etc.). They subsequently embarked on a short European tour.

June 24, 2011, Pearson appeared on the first episode of Young, Broke, and Beautiful, an “off the beaten path” travel show, aired on the Independent Film Channel. When it aired, he was touring Europe with other surviving members of the reunited Swing Kids (now known as Blue Note), who split after the death of co-founding guitarist Eric Allen.

“I would find myself onstage, and these emotional strings were being pulled. Even though I’m an atheist, in a sense it made me feel as if Eric was living on...what he and I shared as musicians and friends, those elements have carried on into all my projects.”

Retox’s August 2011 album Ugly Animals sports a cover designed by Brandon McMinn, who also did the cover of Justin Pearson’s book From the Graveyard of the Arousal Industry. The all-analog release was recorded in March with Manny Nieto and Retox co-producing.

Just before they spent November 2011 touring England and Europe, Pearson was asked to be in a documentary film about Misfits record collecting called 77-83. Their February 16, 2012 Casbah show was the first date of a west coast tour that took them through Long Beach, Los Angeles, San Francisco, and Palm Springs, including a San Diego show with OFF! (5-14 Casbah), before they joined mathcore outfit Narrows for a trio of dates that cover Seattle, Portland, and Seattle.

In August 2012, the band won Best Hard Rock Album at the San Diego Music Awards, while they were recording their second full-length called YPLL (an acronym for “Years of Potential Life Lost”). After returning from a West Coast tour with Tomahawk, they released YPLL via Epitaph Records in May, 2013.

In 2014, they appeared at Mexico's Festival NRMAL, featuring over 50 bands in two cities: Mexico City (March 1) and Monterrey (March 5 through 9), where the Retox set was staged. A short eight-date west coast tour with fellow locals Hot Nerds (as well as Doomsday Student) kicked off October 4 in Santa Ana and wrapped October 11 in L.A.

A new video for "Let's Not Keep In Touch" preceded their full-length Beneath California, released February 10, 2015, via Epitaph. The album was supported with a lengthly tour of the U.S., Canada, Europe, and Russia, running through April, as more videos were released, for "Die In Your Own Cathedral" and then "This Should Hurt A Little Bit."