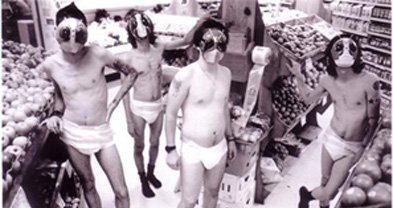 Sci-fi mathcore arthropods the Locust are known for their unique synth-heavy, distorted sound and their stage presence (in concert, they wear insect costumes). Singer Justin Pearson has said, "I just want to change the way people look at music or maybe just destroy it in general."

The music is complex and fast-paced, featuring abrupt and inconsistent time-signature changes. These erratic elements are, according to guitarist Bobby Bray, "a reflection of perhaps how our brains have to function in order to be able to do anything in the Western societies we live in."

Members include Justin Pearson, singer and bass guitarist; Gabe Serbian on drums, who replaced Dave Astor; Joey Karam playing the synthesizer; and Bobby Bray on guitar. Some members formerly played in somewhat well-known political punk bands called Swing Kids and Struggle as well as the punk rock band Le Shok; they are also involved in current side projects with Holy Molar, Some Girls, and Cattle Decapitation (the last broke its connection with the Locust and Three One G, Justin Pearson's personal record label, and acquired an avant-garde reputation of its own).

Since 2002, the insectoid stage outfits worn by the Locust were created by fashion designer Ben Warwas. “The first outfits I did were green, with masks that had mesh over the eyes,” he says. “For awhile, the eye coverings were white, but they discovered that stage lights would completely blind them, so I made the eyes black. The second set I did was green and red, then I did some white ones, a grey set, and the ones they wear now are aqua and fake fur.”

He says the band occasionally commissions emergency replacements. “A few masks have been stolen at shows. Now I make two sets of each outfit, so they can have a spare if something happens, or if the clothes get too stinky...it gets really hot inside them. They also travel with the previous outfits, in case anything happens.”

Warwas has toured with the band, shooting video footage he hopes to use someday for a documentary. “Some people show up in outfits they made themselves,” he says. “I’d love to make Locust masks that they can sell at shows, so the audience would be filled with insect heads, but at least for now it’s too expensive to do as merchandise.”

The band’s soundman and a woman named Robin who takes photos and sells merchandise also wore custom Locust outfits. “It took a few years to talk the sound guy into it. The girl says she gets hit on a whole lot more now!”

Says Robin, "I quickly got initiated to a small dose of some of the shit they've dealt with throughout the years. In Budapest, a city I wouldn't describe as sober, a guy grabbed my boobs to make sure I was a girl. There were nights in Europe when the guys were concerned for my safety. Just the other night, as I walked by, a guy started hitting my back and pushing me, and that was Canada. If it's not unsolicated violence, it's groping. While [I'm] wearing the uniform, people feel free to touch, poke, prod, and cup."

The Locust boycotted Clear Channel Communications, refusing to play in any Clear Channel-owned venues. An unknown party once released a bootlegged record purporting to be a Locust record, but actually only containing recordings of crying or screaming babies. The record is known as Mystery Screams and some people still refuse to believe it's not a real Locust album.

Summer 2012 saw the release of Molecular Genetics from the Gold Standard Labs, a 44-track compilation from Anti Records (sister imprint to the band's one-time label Epitaph Records). Then, early the following year, having been inactive for nearly five years, they reunited to play I'll Be Your Mirror, a London music fest headlined by the Yeah Yeah Yeahs and Grizzly Bear.

In spring 2013, Serbian announced “Katie Serbian and myself will be moving back to San Diego.” The following year's Asia Argento film Incompresa featured onscreen roles for both Justin Pearson and Gabe Serbian, who joined with Three One G labelmate Luke Henshaw to contribute to the film's soundtrack.

The first Locust gig in four years took place at the Desert Daze Festival (running October 10-13, 2019), and the band also announced plans to debut new costumes and their first new music since 2007. They released a typically bizarre video for their track "Recyclable Body Fluids In Human Form," in advance of their November 7 Music Box gig alongside Silent and the Creepy Creeps.