Democrats Hueso and Lara, along with Viejas, Sempra, and Bridgepoint, have had big money ties to state's Latino Legislative Caucus

In a California capitol raid rivaling the Shrimpscam bust of the 1980s, FBI agents last evening rolled through the offices of Democratic state Sen. Ron Calderon of Montebello - a political ally of San Diego Sen. Ben Hueso, also a Democrat - and the headquarters of the state's Latino Legislative Caucus.

The Los Angeles Times quoted Calderon's lawyer Mark Geragos as saying that the FBI investigation, reported to center on alleged public corruption in Los Angeles, was a sham.

"The only one so far who has done anything improper is the government," Geragos said. "The government is out of control and we are going to take the appropriate action to hold them accountable. They should be ashamed of themselves."

Geragos said he plans to go to court to ask that anything taken from the senator's office be returned. Asked about the search of caucus records, Geragos said: "They were desperate to try to justify their … investigation."

No one from the government was talking, other than to say the obvious, that an investigation of some sort was under way.

As Dorian Hargrove reported here in February, Hueso's senate campaign disclosed an expenditure of funds during a Latino Caucus meeting in Los Angeles earlier this year.

On December 31, according to a filing posted online today by the California Secretary of State's office, Democratic Assemblyman Ben Hueso picked up a total of $7800 from the California Latino Caucus Leadership PAC.

The cash is for Hueso's run for the seat of state Senator Juan Vargas, a fellow Democrat who was elected in November to succeed San Diego mayor Bob Filner in Congress.

As noted by the Times, Calderon has also been chummy with Ed Roski, owner of Majestic Realty and wealthy would-be developer of a proposed NFL stadium in the city of Industry, at one time regarded by some as a serious threat to lure the Chargers away from San Diego.

In 2010, after he voted to support an environmental waiver for a football stadium proposed in the city of Industry, Calderon was one of a few lawmakers to accept tickets to a Lakers playoff game from the stadium developer, Majestic Realty.

He previously came under scrutiny for his handling of his legal defense fund, which was set up to cover costs stemming from a vote recount in 2006. Calderon spent thousands of dollars from the defense account on a fundraiser, golf outings and a private airplane service.

Another San Diego link to Calderon and the Latino Caucus is Sen. Ricardo Lara, a graduate of San Diego State University.

Lara recently cancelled a fundraiser for himself and the caucus, set to be held in Las Vegas, after the Sacramento Bee revealed that Station Casinos, the event's host, was lobbying legislators for a California tribal casino project.

At least one San Diego county tribal casino has also been a big caucus backer. So far this year, the Viejas tribal government has given the fund a total of $7500, according to California Secretary of State disclosure records.

Update: The Sacramento Bee has reported that state Senate Sergeant-at-Arms Tony Beard says that reports that the FBI raided the Latino Caucus offices during its investigation related to Ron Calderon were in error, and that only Calderon's offices were searched.

Officials with Senate leader Darrell Steinberg had said that the federal search warrants involved both Calderon's office at the Capitol and the caucus office across the street at 1020 N street.

"Both offices that are subject to the sealed search warrants are the offices of Senator Calderon; one in the Capitol building and the other in the Legislative Office Building."

Hueso loves the camera. Maybe not this time. 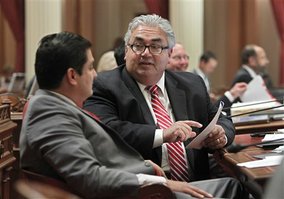 Hueso and Calderon shmoozing in Sacramento. From the Internet, credit: AP Photo/Rich Pedroncelli

Sorry my Spanish isn't trustworth enough to translate, and anyway, I don't want to know what "municipio de Compostela" means. 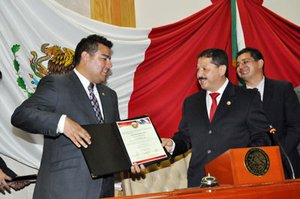 Ricardo Lara and Ben Hueso. From the Internet, credit to diariocritica.org.

It just means municipality of Compostela.

OK. Some say the name derives from the Latin campus stellae, for "field of the star"; I like that better than what the English near-homophone first brings to mind.

Strangleholds have been proven time and time again to be disadvantageous in the long run.

It is time this bit of knowledge takes root among some sectors.

I, for one, am very happy to hear about this raid.

We need some light and air to be let into political decision-making around here. This back-room anti-democratic nonsense must end. Corruption should not be tolerated. The ends do not justify the means.

Who IS this masked "eastlaker," who says "corruption must not be tolerated" and "the ends do not justify the means?" It is and they do if you slime around as part of an untouchable political dynasty and you attended San Diego State. Also, BSP, what -- did you think Compostela meant compost? It's a famous old pilgrimage city in northern Spain which probably has a Mexican municipal counterpart.

Sorry for denigrating the language and municipio de Compostela. Even though I haven't yet gone to Spain, I could have traveled there via Wikipedia. I'm just an ugly American! Or at least a stupid or lazy one. Maybe I'm electable to the Cali lege?

It'll take more than that to kill me, Mad Potter.

You backed up your Lara allegation with stone evidence showing a San Diego mix of confusions as the Indian whereabouts of one Latino caucus. I sever all connections to Rome! Good investigation! I have the mad skills, too. Let's see. Planet Earth, Industry fits on it just so. All we need is the right transporter into the stadium.

Regarding Ricardo Lara & his Las Vegas fundraiser. He must have learned from the best, since he previously worked for one of the biggest gift-takers, Fabian Nunez.

Los Angeles Times 6/6/13: "Over the years, Calderon has managed to stand out in a Legislature awash in gifts from lobbyists."