March in Tijuana to raise awareness on missing women

An organization in Tijuana called Conciencia Juvenil will be having a march to raise awareness on the disappearances of women in the area today, September 8th. The march is the result of multiple young women being killed or disappearing in recent weeks.

On September 4th two young women were found dead in a rural area east of Ensenada. They were found executed after being missing for several days. Also this week a dead woman in her lower 20’s was found wrapped in a blanket in Tecate. Details on the Tecate case and another dead woman in Mexicali have not been disclosed yet.

Several missing women cases have been reported in Tijuana in recent weeks. The case of 23 year old Magaly Salazar Bravo has been covered extensively by local news media. She has been missing since September 1st since she vanished near a Tijuana university.

Anayeli Gómez Nájera, a 16 year old from Tijuana, has been missing since August 2nd.

Conciencia Juvenil is an organization which aims to get the youth involved in social and political issues. The group has specifically taken aim at raising concerns against the President-elect Enrique Peña Nieto.

According to the groups Facebook page the march starts at 11am at the Cuauhtémoc traffic circle. It asks marchers to wear pink and bring photos and banners of missing loved ones. 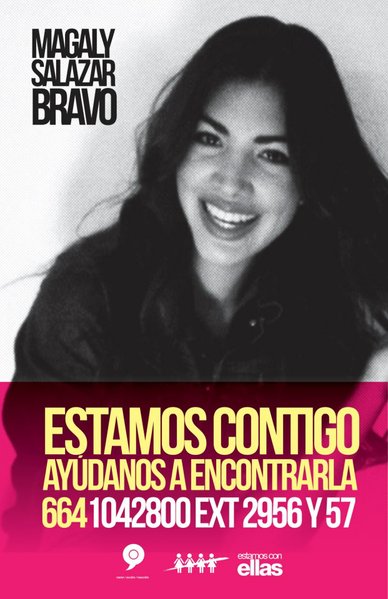 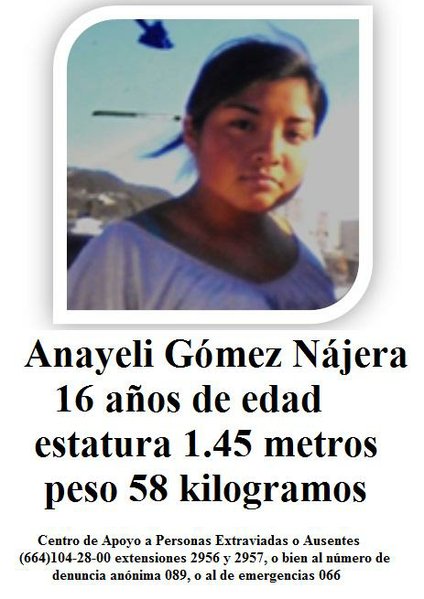 This march sounds so like the many, many marches over the years in San Diego that were intended to end "neighborhood violence" and stop the kids from killing each other. As you might expect these marches were usually in the poorest parts of the county, and were in response to some sort of really nasty gang fights or random shootings. What did they accomplish? Other than giving a short-run sensation that the participants had "done something", they accomplished little or nothing. I fear that this march will have done just about nothing to assist in recovering the missing ones, who are probably dead now, nothing to prod local law enforcement into finding the killers and thus preventing more such abductions and murders, and nothing to change the conditions that lead to these tragedies. In Mexico I have little notion of what the citizenry can really do to hold the elected officials accountable for these messes that the police cannot stop or solve. You just elected another batch of politicians who don't have to worry for many years, and they'll probably just ignore the crimes.

The "feminicidas" in Mexico have nothing to do with neighborhood violence. These women are not killing each other in drive-by shootings. Their deaths appear to be perpetrated by politically powerful men and boys.

Several deaths in particular have been attributed to a batch of politicians that Visduh thinks we just elected: among those murdered was a foreign-exchange student from Belgium, whose government received the official response of "Sorry, your girl was a whore, she had it coming to her."

About five years ago, a Tijuana student named Benazir was raped and murdered by the son a local judge connected to the drug cartels. He has never been charged. Instead, during the investigation, Benazir was accused of being a promiscuous crackhead even though she had no history of such behavior nor were any drugs found by the autopsy. People put up crosses on the site her body was found: our mayor ordered them removed.

These marches are very much different from the ones in the United States. The goal is not to bring the women back to life, nor can we expect to bring their arrogant murderers to justice. These marches are meant to let the whole world know that such evilness is at large, preying on its own people.

For we wrestle not against flesh and blood, but against principalities, against powers, against rulers of darkness of this world, against spiritual wickedness in high places. (Ephesians 6:12)