Hillcrest's new eatery has red light specials and a sprawling menu, but does it work?

I had to be the first to eat at Great Maple because there is no restaurant in San Diego that’s closer to my house. I did a little snooping around when it was under construction in early February, and I walked in on day one, hour three of the opening, but that was just too soon. Now, they’ve had a couple weeks and settled into some kind of a rhythm, so I feel compelled, for the sake of the neighborhood, to have my say. Take this with a grain of salt, as the place is brand, spanking new and still getting all the ducks in a row.

For starters, it’s not Brian’s. Redecoration completely changed the look of the inside, although some of the feel remains the same. The counter is still just that, more of a lunch counter than a bar, and the lack of partitions, corners, and obstructions in general still calls attention to the fact that the building is one, big rectangle. If anything, it’s more open than Brian’s was because the big booths made way for long, low tables and chairs. You can see every diner in the restaurant from any point on the floor, and that’s a little weird. Not bad, just weird. Overall, I do like what they’ve done with the place. The redecoration doesn’t feel rushed or forced and it’s reserved enough to earn a genuine degree of past decades’ classiness.

The cocktail menu looked excellent. I only got to try a single drink, a honey Mule served in a glass version of the bear-shaped honey jars that kids love, and it had plenty of kick from good ginger beer and potent spirits. The rest of the aperitifs were all commendable.

But, how about the food? My takeaway was that it’s all over the place. The sprawling menu doesn’t read too easily, which seems to reflect the general ethos of the cuisine. They have sandwiches, salads, steaks, fish, pastas, pie; you name it, really! Prices are likewise scattered to the four corners of the Earth. $8 starter plates give way to an $18 plate of lobster poutine which, although seeming fabulous, shocks and awes with a borderline $20 price tag for an appetizer! Entrees start under $20, but have no qualms about shooting for the stars and breaking into the $30 bracket. It all seems a little crazy.

I tried a tortilla espanola ($8) that needed salt and more depth of flavor from olive oil and onions. It’s a cool dish and I love seeing it on a menu, but you have to make this thing rock if you’re going to get away with charging eight bucks for a few bites of egg and potatoes! 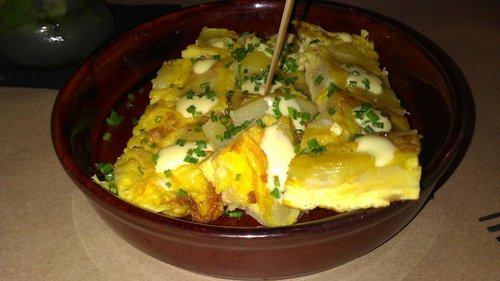 Free-range chicken ($21) proved that Great Maple inherited Brian’s tendency towards generous portions. With enough bird on the plate to feed two people, the dish hit the right notes for a chicken dinner. It wasn’t overcooked and it stayed simple with carrots and mashed potatoes on the side. Doing a decent chicken dinner is harder than it looks, since chicken always just tastes like chicken, and Great Maple’s kitchen succeeded in putting out a hearty, simple plate. 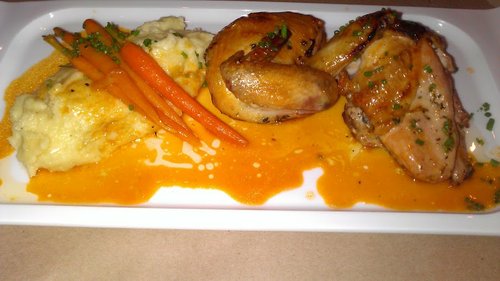 Venison chili ($19) tasted like beans and meat, simmered for a long time. It was pretty good, but it was still just a bowl of chili. The thing that really stole the show was the grilled cheese and fig sandwich that came alongside. Labelled as “mini” on the menu, it was anything but. Drenched in butter and exploding with cheese and figs, it was a near-perfect example of the grilled cheese. 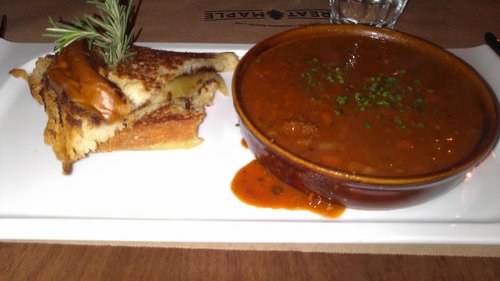 This is a tough call to make, but I felt like Great Maple was over-priced. The food was not high concept and the vibe at the restaurant was casual. At one point, a red light flashed to life on the wall and the servers starting carrying a tray of maple-bacon donuts around the dining room, offering them to diners for $1. I guess the “red light specials” will happen every day there and be something whimsical from the kitchen. That’s fun, but it’s also a little campy and undermines the restaurant’s efforts to nip at the heels of fine dining places, at least as far as pricing is concerned. For my part, I’d rather see them bring prices down to be commensurate with the experience. One thing is very obvious: Great Maple has a lot of verve (and money) behind it and the staff is trying very hard to succeed. I’d be interested to see it happen.

Reading a couple of your recent "Feast" reviews, Ian, I think you need a salt lick--like Padma on Top Chef!