Ed doesn't believe they're just $5 home-made sausages. Who would?

I sit here looking down at this...creature.

Things are weird enough already. Here I am, surrounded by an oryx, a blackbuck antelope, a ram... 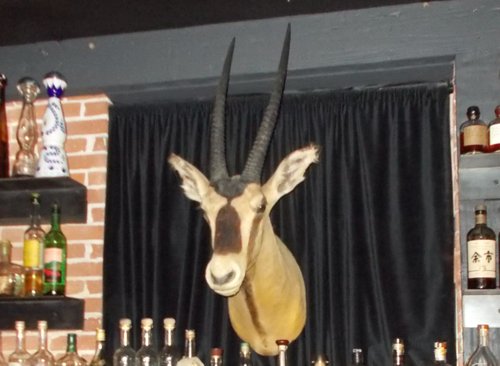 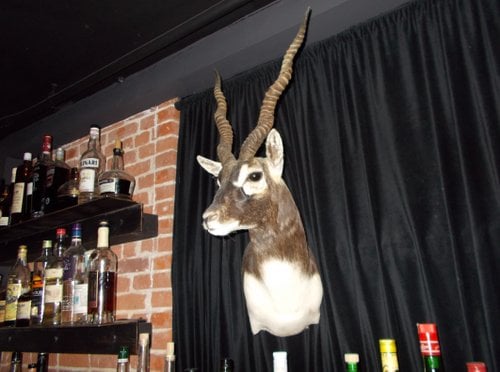 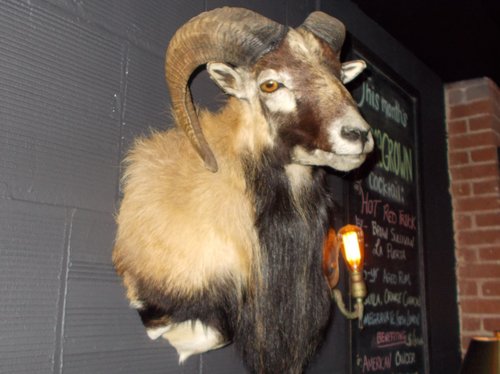 Okay, talking trophies on the wall. But they set the tone for this place I had never even noticed before. You'd almost call this a hole in the wall. 'Cause it is a wall, part of some ancient brick building. Except this is a fairly swank neighborhood downtown. Marina/Seaport Village. Wandered in here. Very pubby pub you would truly never notice if you didn't know to look.

But open the door and whoa! Guess a lot of people know to look. The bar and the long tables are packed with business types and the partners who love them. Quite a few English accents. No surprise: this is a very English-style pub. It’s The Lion’s Share, 629 Kettner Boulevard, near the Seaport Village Green Line trolley stop (619-564-6924).

This is happy hour, and it seems to have some real deals. For $4, you get a bruschetta, or house popcorn or house-cut fries. OK so no big deal there. But in the $6 column they have like rabbit sausage with veggies or hey, Moroccan chicken liver with Medjool dates and pita bread. For $8 you gets wild boar bacon sliders, lamb Bolognese fries, or corn and tomato salad.

But below all that is what looks like the deal of deals. You pay $5 for a combo of summer sausage and draft beer. I go for that.

The bar guy – Evan? – brings me the beer part of the deal. Interesting one, too. It’s a nice bulging glass of Avery Joe’s Pilsner. Kinda grapefruity? Little bit grassy? Whatever, for this hot hiker, it’s fresh, perfect.

The businessmen at the end of the bar are having a great old time at poor Mayor Filner’s expense.

The bar guys seem to know most of the people coming up to the bar. Like, “How was the weekend?” “Did you try that movie?” 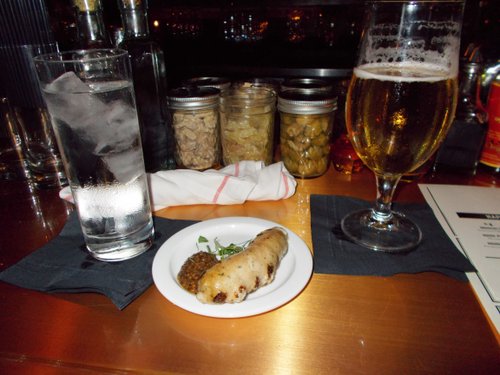 And then comes this...thing. I swear I see it pulsing, bursting to get out. Awoken by Global Warming?

Kidding. It's a sausage. My sausage, house-made. Chicken. A tad dry and crumbly inside for my tastes. But it comes with an interesting mustard. And yes it looks like it should be suspended from some jungle branch while it gets through the pupa stage, but actually it tastes, well original, herby. Plus I like the fact they’re creating these things here (okay, trusting it didn't come in from Mars) rather than buying from some giant meat factory. 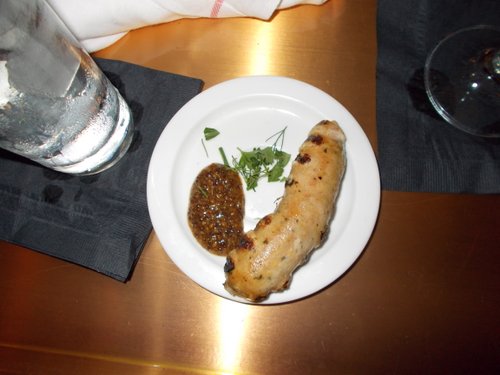 Fact is, after downing this (and no, not feeling spaced out yet, heh heh) still a little peckish. So I go for the other thing that stuck out on the HH menu: Moroccan chicken liver, with Medjool dates and herb pita bread. When it comes, it's a big mess of darkish ground meat with the glow of date flesh in there and cilantro leaves scattered on top. I grab one of the eight pita bread slices and have at it. Mmm. It tastes herby and sweet. Almost like a curry. 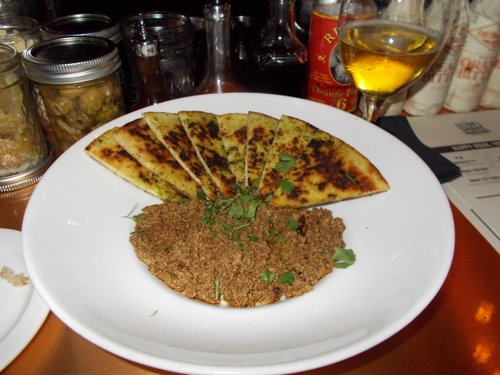 Now I want to try the rabbit sausage ($6) and the lamb Bolognese fries ($8). But I hear my trolley coming down the line. Guess it’ll have to be next time.

Oh, and just seen that Barbarella was here about five months ago. See her much more serious review for nosh from the main menu.