Everyone was shocked, and many were disappointed, when Brian’s American Eatery closed its doors. The closure came out of the blue — the word on the street being that one of the business partners was ripping off the other — and the restaurant remains closed for the time being. It’s been reincarnated, however, and given something of a facelift as Lil B’s on El Cajon Boulevard at the site of the erstwhile Johnny’s R Family Restaurant in North Park. I’ve long maintained that there was a time and a place for visiting Brian’s, so I had to check out Lil B’s to see if the transition had kept the dream alive, so to speak.

The new look dispatches with the diner aesthetic and embraces a melding of vintage cool and modern flair. The early-Space Age look of polka dot textiles and polished metal ceilings is a little bit Austin Powers, but the designers tempered what could have been a garish look just enough that it’s charming and cozy inside. I think this is largely because of the bright white lighting, which would make a more austere dining area look aseptic but makes Lil B’s come across as cheerful. It's still got the whole "Gay Denny's" thing going on and it's still cool to have that so niche so perfectly filled. Count on lots of pop tunes, which I not-so-secretly love, and hungry bears to keep things familiar.

As far as I know, some staff was taken from the old Brian’s. I wouldn’t be surprised, as the menu is virtually identical and the experience remains much the same. I found the entire service to be a touch disorganized, but still very friendly and ultimately efficient. A cursory examination of the menu indicated that prices had fallen somewhat in comparison with the OG Brian’s, which was good to see as the cost of entry always seemed triflingly high at the Washington Street location. For example, sandwich plates that formerly cost $13+ have fallen towards the $10 range. I think that the portion sizes, especially the inclusion of huge side dishes, has been restricted to some degree. This is acceptable, since the old Brian’s served food in perverse quantities.

I tried an order of macaroni and cheese filled egg rolls ($8.99) that came with about half-a-cup of honey mustard flavored dipping sauce. I’ll say that this is a wonderful idea for a dish, with the caveat that it’s a complete and total “fattie snack” (as a friend of mine would say) perhaps more suited to hangover avoidance than actual nutrition. Nine dollars for three egg rolls feel expensive, even when they do contain a few bits of bacon, but there’s something to be said for deep fried mac n’ cheese. 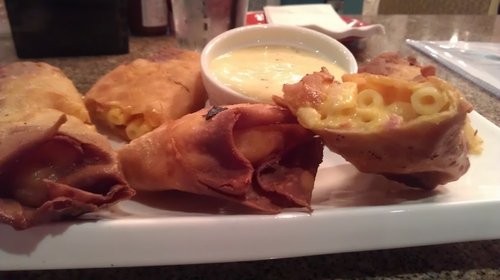 “Churrasco chicken osso bucco” has to be one of the strangest things I’ve eaten in a while. Enormous chicken legs had been trimmed to resemble miniature veal shanks and then covered in a spicy, cheese sauce. They were, for all intents and purposes, the Hulked-out version of buffalo wings and a staggering piece of lateral thinking on behalf of the chef. They were pretty good to eat, too, although the huge amounts of sauce made the whole experience something of a chore by the end. 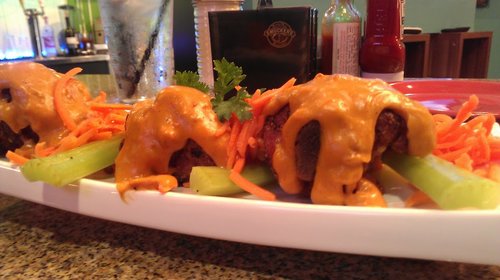 The rest of the menu was similarly comfort food-y, with things like fried chicken and a couple of steaks for under $20. Flat iron steak for $15.99 with a couple side dishes? Sure! I also have to give it up for the “crazy burger” ($10.99) that’s covered in peanut butter, bacon, and cheddar cheese. I’ve been trying for years to convince everyone that grilled cheese sandwiches with peanut butter are the most badass thing ever. Glad to see somebody paying attention to the principle.

So, yeah, Lil B’s is basically Brian’s, in case anybody was concerned that Brian #1 might have diverged from the path in opening up a new restau without Brian #2. I think I actually like it a little better, especially since they kept that 24-hour policy for weekends.

I really like the cool look they came up with. I miss the patio dining they had at Brian's, but they reportedly plan to add a patio in the future. And not just "some staff"; I was told most of the staff is from the former Brian's.

Makes sense to me. I couldn't recognize faces or anything--not that regular of a customer--but everybody seemed pretty friendly for only having been working together a little while.