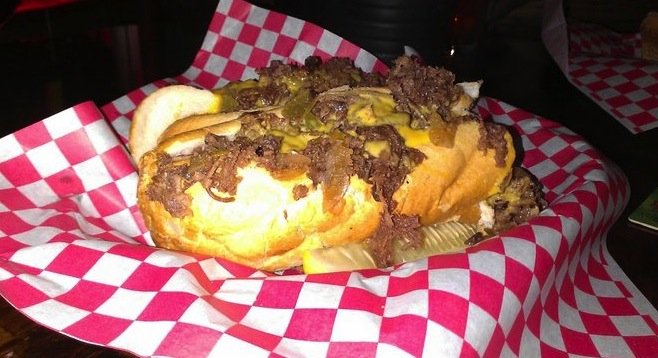 Alex’s Brown Bag is the only stop on the Tour that has an age restriction. It’s in the back of Latitude 32 Pub on Cass Street and the bartender stops everyone to check ID’s before granting access to the inner sanctum. Youngsters who want a sandwich better come up with a fake or order delivery, which is only available Monday-Friday from 11-4. Still, the menu claims Alex’s is “San Diego’s King of the Philly Cheesesteak,” so I took advantage of my greatly advanced age and paid the place a visit. 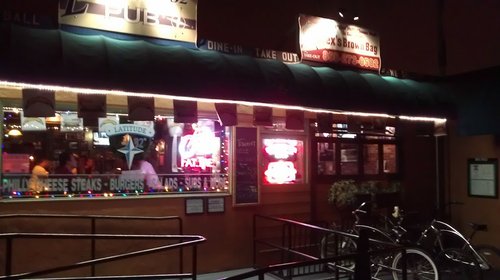 Lat 32 is definitely a young person’s bar. It’s telling when I feel like an old guy at twenty-eight. The patrons’ average age couldn’t have been too far north of 21. I made my way back through the bar and found the sub shop quasi-isolated. There’s a table in the line of fire for a dart board back there. Very hazardous. I had to wonder what the business license looks like for a business inside a business that doesn’t have it’s own door. Is the sign just a sign and Alex’s is separate from the bar in name only? 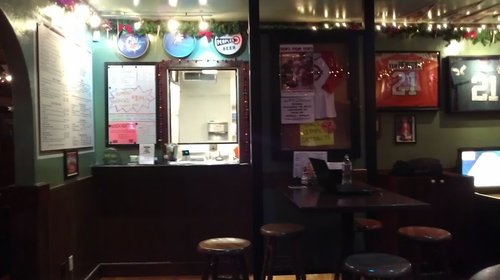 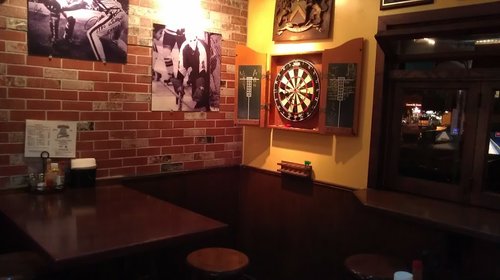 My 12” cheesesteak came loaded with mushrooms, peppers, onions, and Cheez Whiz for $8.95 on a grilled Amoroso roll. I must hand it to Alex’s for grilling the roll to a crispy, crunchiness. I’ve always loved toasted bread and the texture of the otherwise chewy Amoroso had been altered in the grilling. It ended up being more like the little baguettes that Vietnamese sandwiches come on, with a crust that breaks into dust and shards instead of yielding to the teeth with great reluctance.

While it may have been the same meat in spirit, the steak within the sandwich lacked the succulence of the shaved rib-eye that characterizes great cheesesteaks. It had a slightly stringy texture that made me think of Steak-Umms and school lunch. On the plus side, there was plenty of it. The sandwich overfilled it’s bounds and made me wish for a fork, of which there were none to be seen. The accompanying pickle, much like at Pop’s, served as a refreshing palate cleanser.

I also got to try a “pizza steak” ($5.50 for a 6”), which is a common feature at many sub shops. Slathered in pizza sauce and mozzarella cheese, it was...just one of those things. Some bored cook at some point had a stupid idea that turned out to be tasty, and also really messy. 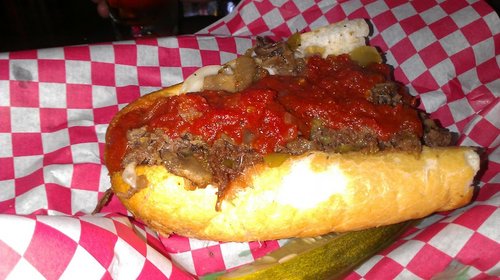 Instead of the steak, it might be worthwhile to try Alex’s “bacon cheeny chico,” which covers sliced chicken and bacon with pepperoncini and Whiz. Best name I’ve seen on a sandwich in a long time? I think so.