A trip to the land of exact change and substantial sandwiches

The Tour wasn’t slated to stop at Giorgino’s until later, but complications in the world caused things to go all haywire and I found myself madly dashing to Golden Hill in search of cheesesteak on a foggy evening. I’d been saving Giorgino’s because I had a good feeling about it. 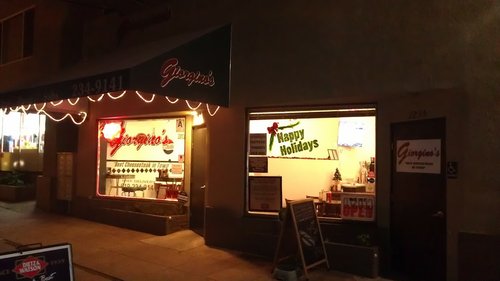 After dark, the bright lights stood out on the otherwise darkened streets. This is part of what I like about this section of Golden Hill, the subtle transition between neighborhoods and little, quasi-hidden businesses. It generates good feelings that are perfect for the intake of steak sandwiches. When the surroundings are peaceful, I feel like I’m stumbling into a little, secret world. I know it’s just an effect, but it’s a pleasant one.

Giorgino’s was bright, clean, and welcoming. After-the-fact examination of the deli’s website proves that the ownership is proud of the interior, which is snazzy without being ridiculous. I’d say that, so far, Giorgino’s has the best look of anywhere on the Tour. The bar was good, the cozy, partitioned dining room was comfortable and stylish. I just plain liked it.

I didn’t have cash to pay for my cheesesteak, which was sort of a bummer since the “cash is king” discount nets a 5% bonus to anyone paying with green paper. Prices are cleverly orchestrated so that they round to quarters when the discount applies because “nobody likes having a pocketful of change,” or so I overheard it said. That sort of polish exemplified Giorgino’s style. 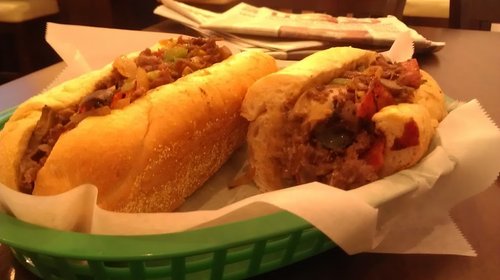 My cheesesteak with the works ($7.80 + $0.49 for pepperoni) was finished in record time and hit the table steaming hot. Too hot to eat, really, so I had to let it cool down. At first, I thought it was on the small side, but the spatula technique in Giorgino’s kitchen is on point and the cook had managed to cram an impressive volume of steak inside the fresh, Amoroso roll with very little overflow. Architecturally speaking, it was a work of art. I didn’t see an option for Cheez Whiz, so I stuck to my guns and let the standard American cheese speak for itself. The steak wasn’t the finest I’ve had, though it was on the good side of average and the seasoning was perfect. I found that, even without being wrapped in paper, it held together perfectly, which is no mean feat.

Of the other steak options, the “gaucho” was the most interesting. They take a mushroom steak with melted mozzarella and douse it in chimichurri sauce. Sounds excellent and I’d love to have tried it, but I felt compelled to pass judgment on the more “standard” sandwich out of a (misguided?) quest for some culinary objectivity. Next time, the gaucho!