Stage one: sampling the fare at San Diego's most established cheesesteak operation

Back in June, I ate at the Philly Grill in North Park and it didn’t blow my mind or anything. The steak was delicious, but there was too little of it and it had been assembled without much care. The extreme convenience of location softened my sentiments somewhat, though not to the point of a rave review. Since then, doing a rundown of cheesesteak shops has been in the back of my mind.

Yeah, I’m slow sometimes but it’s finally underway after much deliberation and list-making. I want to limit myself (more or less) to cheesesteak-specific places. I decided to start with the local reference point, the standard by which other cheesesteaks will be judged, Gaglione Brothers (“the best cheesesteaks in San Diego!” or so they say). I went to the Mission Gorge location since I’m exploring Grantville and Allied Gardens lately, but they also have one down by the sports arena. I should hope they’d be identical. 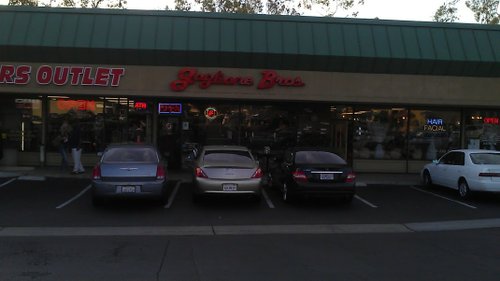 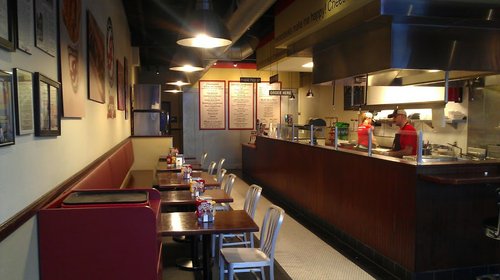 Gaglione’s is nicer, more polished inside than I expect from a sub shop. It seems more like they took design cues from Quizno’s than from any mom and pop cheesesteak shop I’ve been to. I prefer the slick look to a faux-authentic one. I’m glad the interior hadn’t been made to look like a provincial hole-in-the-wall from some imagined Pennsylvania neighborhood.

On first entering, the display of peppers and relishes delighted with promises of limitless giardiniera, cherry peppers, jalapenos, pepperoncini, and other spicy bits. 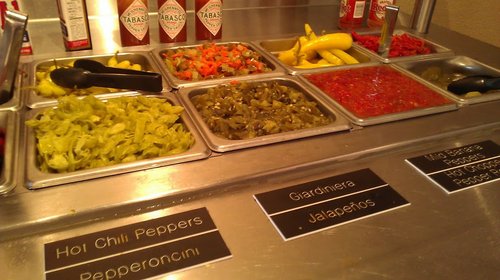 Cool, let’s do this.

It took a minute for the food to cook, not a foolishly long time, but longer than I would expect. What were they doing to my steak? Shaving it to order? Hunting the beef? Somehow, I expected instant gratification. Probably because I worked in a lot of sub shops as a kid and I could prepare cheesesteaks in about 97 seconds.

Then I realized I was probably waiting for the fries. Silly me.

Tasty garlic fries, too. Insufficiently crispy, but covered in a thick slurry of oily chopped garlic and herbs. I might like to try an order with garlic and Cheez Whiz ($3.49) sometime. 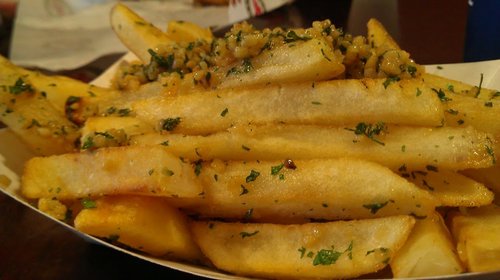 When I got the steak, It didn’t have quite the heft that I was looking for. I wouldn’t call it “petite,” it’s not like I was looking at a garden party cucumber sandwich or anything, but it wasn’t the monstrous sandwich I was expecting for almost $1/inch. Still, the steak was delightful. Savory, a little chewy, laced with onions, hot cherry peppers, and mushrooms. Molten American cheese (no Whiz for me that day) ran through the sub, soaking into the bread. The sandwich quelled my appetite more than its diminutive stature implied. Perhaps the steak was leaner and more substantial than the average cheesesteak? It’s not as though such subs are known for being made from the primest cuts of beef. I’d call Gaglione Brother’s cheesesteak...”solid.” It had everything I was looking for and the attention to detail (and generosity) that was missing at the Philly Grill.

Great descriptions! I've never got the whole Whizz thing. I do love that steak/cheese combo, but don't claim any inside track on them. That would be dangerous. Philly Cheesesteaks are a religion, not a food choice. Eddie's (30th street) seemed pretty good to this infidel

Eddie's is forthcoming. I actually compiled a comprehensive list today and there are a lot of steak sandwiches to be eaten. Like, this could take weeks. #stoked

Pretty much the same take I have on the Pt. Loma/Sports Arena location: under-done fries get a lot of help from the garlic mix, but it only makes their sogginess worse. Steaks are good, but not mind-blowing...definitely a bit leaner meat than others. Only difference is I usually supplement the sliced cherry peppers with a slathering of the pepper relish.

Count me in as one fat man looking forward to the rest of the list.

I've talked about Mike's in a general context before. Persnaps I will add them to the list of cheesesteak purveyors. In the long run, this is going to be dependent on how many steak subs I can eat before I break!