Vista breakfast spot has longevity and charm to spare.

No restaurant in Vista has been open longer than Allen’s Alley Cafe. In the restaurant world, sixty years is practically an eternity. I mean, Allen’s is no White Horse Tavern, but it’s been around for a lot longer the the five year life span of the average restau! Set in an eponymous alleyway, the long, narrow, brick building has a handful of tables and a lunch counter with some compelling patio space to soak up the North County sun during all-day breakfast service. It’s a true family affair, with pictures of children and little league teams and stuff on the walls. During my recent visit there, a friend (who grew up in Vista) was positive that the woman behind the counter had been there when he was a kid. 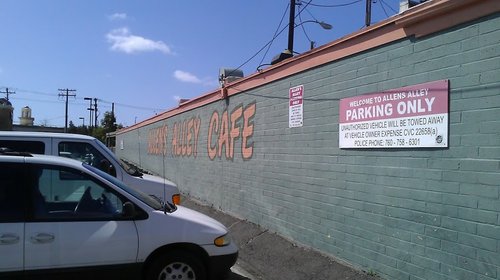 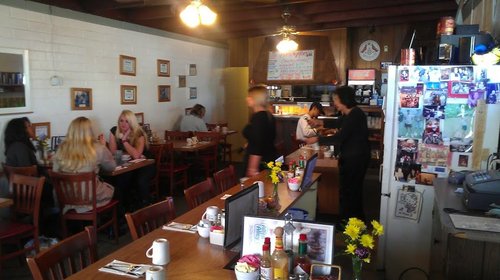 The menu claims Allen’s biscuits and gravy are the best in the world: an ambitious mark when every other spot in the American South is likely to make the same boast. Still, the soft biscuits and creamy, sausage gravy at Allen’s were tasty, and inexpensive at $4.95 for a single biscuit, $5.95 for a double order. 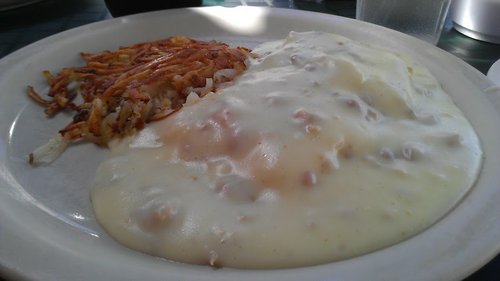 Allen’s is by no means alone in this, but the trend of naming menu items after one-time customers and staffers is maybe the greatest charm of small, family dining places. On the menu, the “Charlie burger” weighs in at a full 1LB of meat, the “Dunya’s special” sandwich is chicken and mushrooms on a croissant, and “Nina’s delight” is a veggie sandwich with cream cheese and almonds. Who are these people? Somebody knows, no doubt, but that’s not really the point. In some ways, there is no greater honor than having your name forever emblazoned on the menu at your favorite restaurant, particularly if it stays open for the better part of a century and shows no sign of slowing down. With all the Alley's charms, It's easy to see how it's "the place in Vista."