Wackness at the Joint

Ocean Beach sushi bar is best when things get weird.

A Newport Street hotspot, the Joint is a weird place. It appears appropriately seedy and OBecian from the outside, promising the beachy awesomeness of a Hodad’s or South Beach, but the interior had an aura of North Park hip courtesy of moody lighting, contemporary art, and subtle decorative nods towards romantic visions of Belgian beer halls.

No one could say it lacks character. 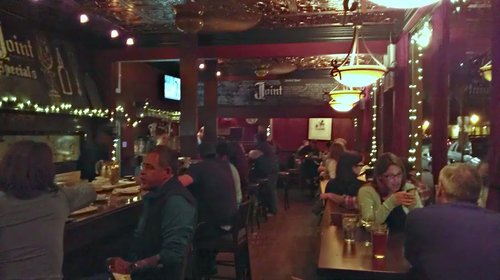 “Sushi and tapas” go together well enough. Small portions. Good for sharing. It makes a degree of sense. The Joint’s menu spans a few pages of tiny print and differentiating between happy hour, lunch, and dinner demands careful reading. Prices run towards the high end of cheap, with lots of big sushi rolls well under $10 and similar pricing on the tapas. Drinks are cheap-ish, beer on tap is plentiful, and the sake selection merits exploration.

The food threw me for a loop as it was hard to say exactly what was going on in the kitchen. From the tapas section, salt cod fritters were, for all intents and purposes, hand-made fish sticks. Don’t get me wrong, they were deliciously filled with sweet, delicate fish and fried in perfect little golden quenelles. But there was something Gorton’s or Van de Kamp’s going on there.

Shrimp and grits, a visual treat, let me down none too gently with overcooked shrimp and oversalted grits. Why is this dish so hard to get right, kitchens of San Diego? 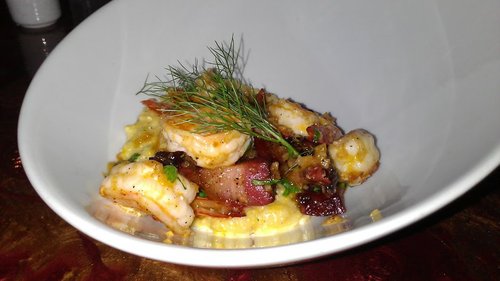 The sushi menu is where things got really weird. The Joint doesn’t appear to focus on “conventional” sushi, but the weird, off kilter stuff they do is actually pretty damn good. For example, their “nigiri” includes the “Mac Daddy.” It’s a couple pieces of raw salmon wrapped around a chunk of rice, some fried eel, and, of all things, macadamia nuts...and it totally worked. It’s a bit of an affront to decency, but I’m willing to overlook it. 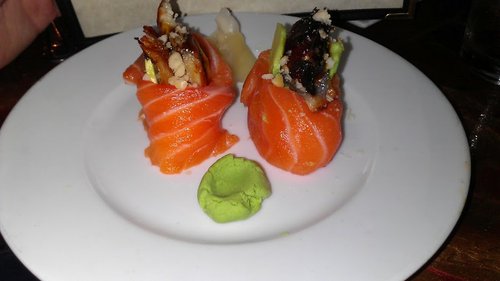 The Joint's take on nigirizushi is all wrong, but oh-so-right

Similarly, there was this “granny’s grinds” roll on the menu that had apples, asparagus, and salmon in it, and that wasn’t far from yet another roll that included mac nuts. Biting into a roll that was filled with cream cheese and otherwise debauched by non-sushi ingredients, I had to admit that the Joint seems to have gotten this indulgent, clownish breed of sushi figured out. Someone in the kitchen has an inspired mind when it comes to oddball combos. It’s as if the logic of the munchies-ridden stoner prevailed over conventional wisdom, and maybe that’s not such a bad thing. I kind of like that the best way to handle the place is to order the weirdest thing I can find on the menu. 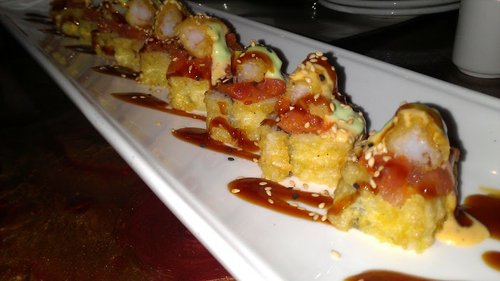 obecians LOVE the Joint! The food is delicious and everything is made from scratch. Yea, OB keeps it weird, and a little wack-y, but that's how we like it :)