That’s what stops me, at the head of the menu. A kinda quote from that David Carradine TV series, Kung Fu. Carradine played Kwai Chang Caine, who tried not to fight at least until the last five minutes of each show.

And it also tells me they’re not deadly serious here, and they’re probably not gonna treat you like second-class citizens, just because you’re here for the happy hour deals.

I swear. Happy hour has saved me a zillion times. 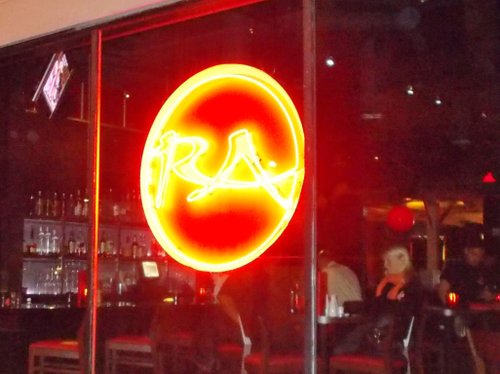 ...and considering going in? ’Cause, honestly, you think of it as yuppie central, with everyone chasing expensive sakes with expensive Japanese beers and using chopsticks like fencing swords as they talk office politics. 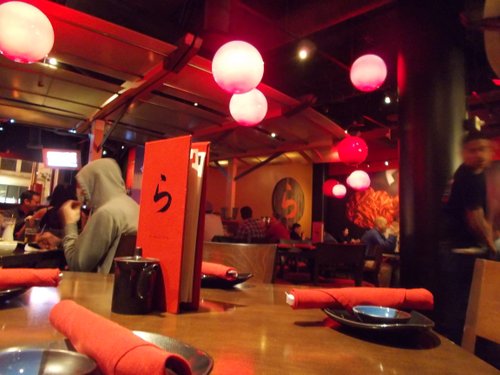 But the crowd tonight is fairly mellow. The black-tunic welcome gals, who look like they could spin in the air and down you with one hand chop, say you can eat anywhere, bar, tables, or sushi bar at the back. 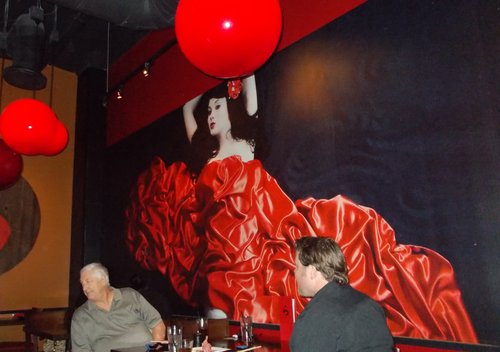 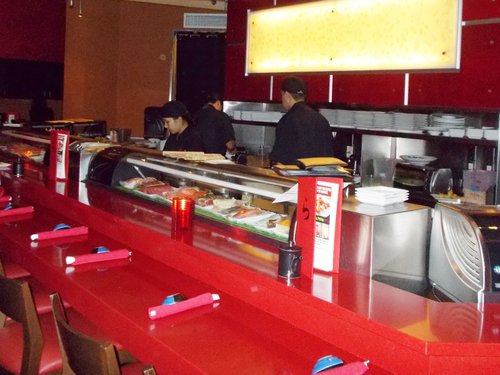 Two sushi chefs are busy rolling rolls when I sit down in the red-black bar in the rear. Rogelio, Maria. 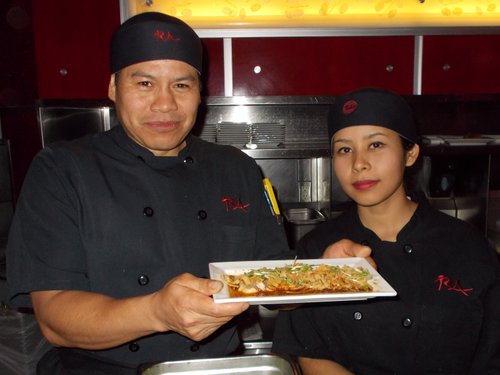 She’s my second female sushi chef. It’s still a man’s world here at the front end. And yes, Rogelio says he has heard about women being warmer than men and affecting raw fish, like cooking it slightly when they handle it. “But I don’t think they’re really warmer. Maria is the best.”

HH Bargains? Sure. Thirst and foremost: sake. You get a pot of the hot stuff for $3. Deal! I order that, then whine at Rogelio and Bobby the server... 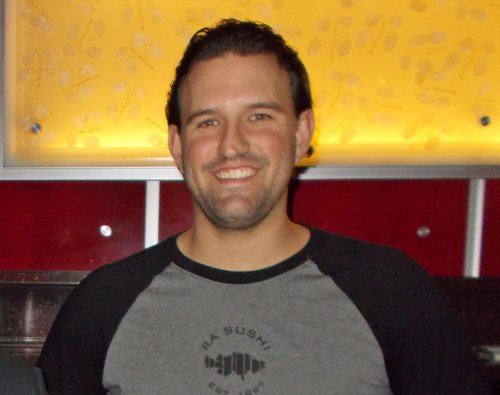 ...about too much to choose from. On their recs. I go for a tapa sashimi called Crispy Onion Albacore. It’s a “seared albacore with garlic ponzu sauce, crispy onions and wontons, served with organic micro greens.” Costs $5.25.

Then, for a roll, Bobby says everyone picks the #1 item on the menu, Viva Las Vegas, with crab, cream cheese roiled in rice and seaweed, plus bits and pieces like sliced lotus root, fierd spinach, spicy tuna, crab…

But then Bobby says how about Pacific Roll ($6.25), “if you like spicy.” I do. I take it. It’s albacore, cilantro and jalapeño – Mexican influence! – plus cucumber rolled, then topped with avocado and mango salsa (more Mexico!), plus red beet tempura bits and sautéed cashew nuts.

It’s the cashew nuts that nail the sale.

I’m sure Japanese purists would say “What is this?” But for me the sweet mango thing is great, I like the cashews, and I like the heat. 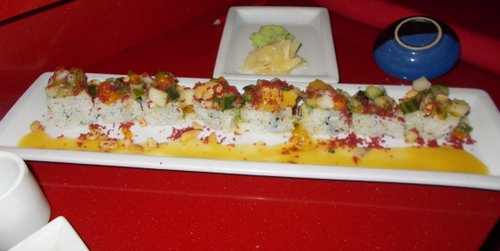 Also the whole crunchy thing about the albacore sashimi.

"So what's the biggest, dumbest mistake we guys make from this side of the susi counter?" I ask Rogelio.

He doesn't hesitate. "Guys think the wasabi is guacamole."

Ow! That mistake would hurt. He says the difference between Japanese and Americans eating here is the Japanese order everything at once and pick at everything, whereas Americans order one dish at a time.

So hey, I was kinda cool ordering both at the same time after all. 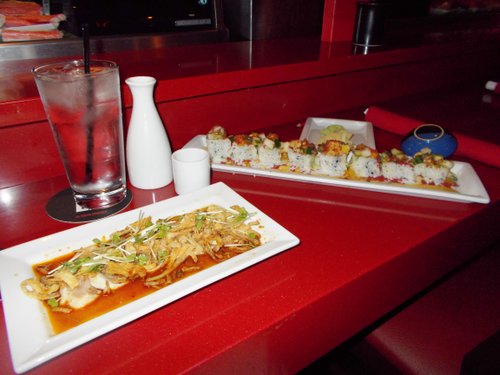 In the end, I screw up courage to ask Rogelio one more Dumb Qiuestion: “What’s the difference between sushi and sashimi?"

“Very simple,” he says. "Sushi is always with rice."

Seems sashimi is just raw fish. Not rolled in rice.

So the art of eating at a sushi bar? “Get to knoiw your sushi chef, let him get to know you. So you know his specialties and he knows your tastes. It’s a relationship thing. Often people will say 'Just give me what you feel like tonight.' They trust you.”

Huh. A relationship. I really like the sound of that. I know Ra is a massive chain and all, but this is a little corner you could get used to. Won’t be long before I’m taking a gulp of sake and telling him how the beautiful Carla doesn’t really understand me… kidding. She does. Too well. 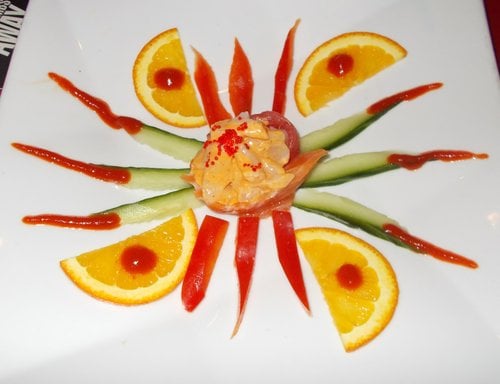 One of Chef Rogelio's creations at RA: albacore and salmon