In an effort to chase away the last ghosts of the night before, I stopped in for Sunday brunch at Cueva Bar in University Heights. I wanted pancakes, partly to fuel my trip to Mexico (more on that later) and partly because I felt like a little starch bomb would fortify my soul. Still, I wasn't crazy about the inevitable food coma that a pancake breakfast might engender. When I got my oatmeal pancakes ($6) that had been filled with diced apples, I was surprised by the petite portion. Two small pancakes nestled together on the plate, dressed with a couple dollops of nitrous-powered whipped cream and a sprinkling of confectionery sugar. They were light in color, courtesy of the oats, and very delicate in texture. It was a dainty breakfast if ever I've had one. 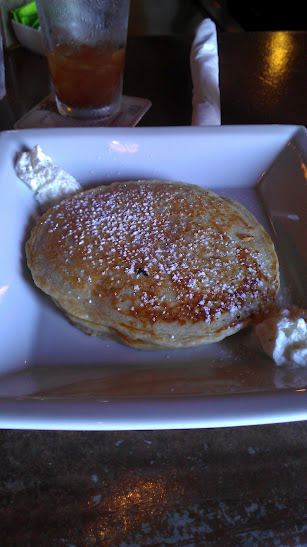 In the past, I've expressed my thoughts on massive portions of food. They aren't always positive. Dropping a tactical nuclear meal on your pancreas and slipping into a quasi-diabetic insulin coma isn't always the nicest feeling. Beyond the fact that they were tasty, I was pleased by the petite cakes from Cueva Bar's kitchen because they didn't put me to sleep.

The rest of the menu costs between $6 and $12 for plates that are, like the pancakes, more modestly portioned. I saw a few plates of chilaquiles go out that had been covered in a deep, red mole sauce. There were plenty of Cueva's signature empanadas being served as well.

Earlier, I had spotted some friends on the patio, so I asked them how they felt about their meal. Discerning types, they were all enthusiastic about the food and nobody complained of the plates being small.

The only real problem was that the beleaguered bartender, left mostly alone to tend the bar, dining room, and patio at the same time, was having trouble. Taking orders, seating guests, making drinks, running food, and otherwise doing the work of two or three people took its toll on smooth service.. He was visibly relieved to get help at one point.

I suspect that smaller, one might even say reasonable, portions of food are actually more appealing to people when they sit down to eat. My plate of pancakes was a reasonable meal, despite its smaller size, and I didn't want any more food when I had finished eating and my stomach had sent the critical messages to my brain that I was full. There's a Japanese term, "hara hachi bu," that roughly translates to "eat until you're 80% full." In my experience, eating just a little bit less than is customary can be equally satisfying, if not more so.

Plus, it leaves room for beer!

I had a michelada ($5) with my breakfast. This was done to soothe the lingering stresses of Saturday night, but also because a good michelada is a thing of beauty. The drinks were being served without ice, but the bartender was more than happy to ice my beverage for me and I'd recommend anyone else make the same request. I could have had a mimosa for the same price, or a bottomless one for $10, but I think the salty, spicy, refreshing michelada was the absolute right beverage for me, or to go with Cueva Bar's food in general.

Cueva Bar is still at 2123 Adams Avenue and brunch is served on Sunday only starting at ten in the morning.