Or the Spanish omelet that's ripely stuffed with tomatoes, chilis, chorizo, cheese, and avocado; likewise served with fruit and potatoes. 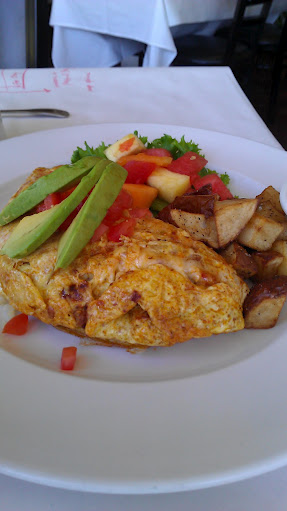 A Bloody Mary, made with soju instead of regular vodka because the restaurant seems to be licensed only for beer and wine, is practically required for an Adams Avenue Grill brunch. Getting it served in a pint glass that declares "fizzy yellow beer is for wussies" is an agreeable touch. 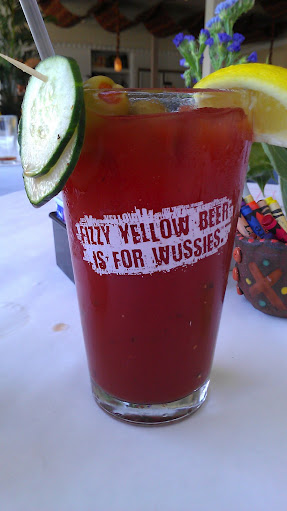 As a breakfast destination, the Grill is more conducive to languid brunching than hurried eating. The tables are covered in white paper that begs to be drawn on (crayons are available) and the decor is more evocative of a country villa than an uptown cafe; the kind of place where one sits in the sun rather than eats on the run. 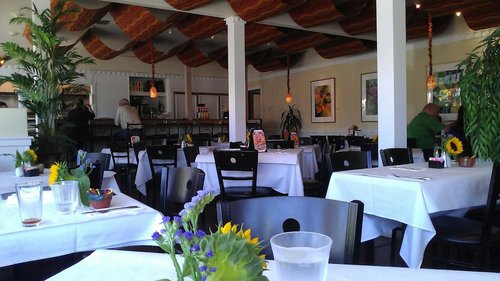 Because of those two factors, it's unlikely that weekday breakfast will mirror weekend brunch because the on-the-go weekday morning customer isn't likely to want to stop, drink three cups of coffee and two mimosas, work through a massive breakfast, and linger for the sake of digestion. I would expect portable food, smaller portions, and speedy service to compete for the midweek dollar.

A stripped down version of the Grill's menu will be delightful if the creative flair and affordable, upscale touches that characterize the extant brunch and dinner offerings carry over to weekday breakfast. Ideally, the restaurant will occupy a breakfast middle ground: a little too nice for every day, but accessible enough for a once-a-week treat.