The big, yellow sign stretched across the corner of El Zarape on Adams Avenue used exactly that word, "extravaganza." How to resist such promise? Feeling partied-out and in need of a substantial breakfast, I ventured out to the Mexican restaurant over the weekend. I had really forgotten just how exceptional the decoration is inside "the other El Zarape." Perhaps they went a little over the top with the whole Mexican folk art decor, but everything in there suggests quality. The tiling is flawless and artistic, the wrought-iron chairs have a pleasing weight, even the marble-appointed bathrooms have class.

All of which would be rendered moot if the breakfast wasn't any good. The extensive selection surprised me. There were a lot of conventional favorites (french toast and whatnot) as well as the expected Mexican flavors. A typically Californian sense of fusion pervaded the whole. Unexpected dishes, like vegetable-stuffed crepes served with eggs ($8.99) threw the occasional curveball into the mix.

A shrimp omelet ($10.95) was made of fluffy eggs stuffed with shrimp, cheese, and tomatoes. The whole apparatus had been topped with white sauce and sliced avocado. Although rich, it wasn't unmanageable. Steak and eggs ($9.99) included a small-ish portion of steak that tasted of carne asada but had the look of a sirloin tip rather than the skirt steak that's usually used in the preparation of the "grilled meat." Both dishes came with potatoes, which had been griddled with red and green peppers before being served cold, and a cup of chopped fruit. 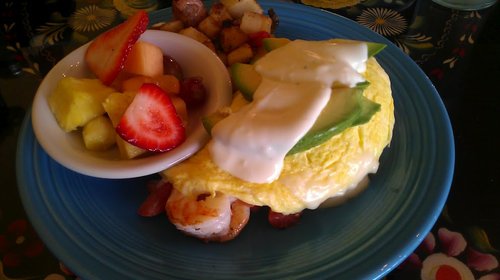 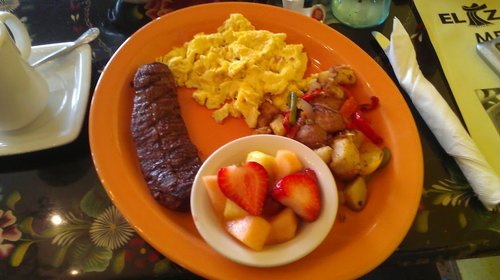 The cold side dish was something of a disappointment, but the preparations of both dishes were on point. Pancakes, french toast, or crepes with fresh strawberries, bananas, and ice cream would have spelled disaster for me, but it's worth noting that El Zarape hasn't neglected sweet breakfast.

The coffee was hot and plentiful and, had I been in the mood, I could have indulged in plenty of brunchtime cocktails from the restaurant's full bar. In the past, I've found that El Zarape's bar has exceeded the food in terms of quality, though the breakfast was both more reasonable and more satisfying than I remember the other fare as having been. With its cheerful ambiance, generous portions, and potential for sunrise drinking, I'd give El Zarape's weekend breakfast extravaganza (which begins ambitiously at 6:30 AM) my endorsement. Until now, the big El Zarape hasn't managed to make a compelling argument for itself as an alternative to the small El Zarape in University Heights. The bar has always been good, but the food always had the unfortunate designation of "not as good as the other one, but more expensive." The expanded breakfast menu might change things in the El Zarape family.