El Borrego has been garnering praise over its lamb barbacoa for years. It’s not famous for breakfast. Nevertheless, as I rolled through City Heights, I saw a sign above the door there that advertised cafe de la olla (cinnamon-laced Mexican-style coffee) for breakfast.

Next thing I know, I’m bangin’ a u-ie and storming the gates of this precious, little Mexican restaurant with breakfast and coffee on my mind. They didn’t have a huge breakfast menu, a few egg dishes and some chilaquiles, but the sunny, yellow interior with the rustic looking chairs just begged for some morning sitdown time with a hot cup of coffee. 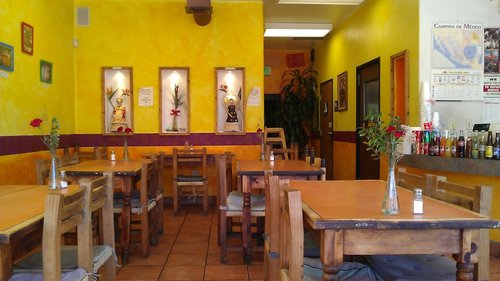 The woman behind the counter could run for “Nicest Lady of the Year.” She weathered my indecisive questioning and ill-preparedness with naught but smiles and good cheer. When I finally settled on some chilaquiles and a cafe, she made the coffee materialize in moments. It was scorching hot, but the scent of cinnamon rose out of the mug and got me all excited. With a little milk added, it was beautifully sweet and strong. All the charm of a five-dollar coffee drink for less than half the price!

And the chilaquiles ($6.99) were marvelous as well. The eggs had been cooked a little vigorously, but the fried tortilla bits soaked in red salsa were excellent. They retained just the right amount of crispiness. Not enough to lacerate the roof of my mouth as I greedily scooped up huge portions, but still sufficient texture to make them wonderful even with the imperfect eggs. For a Mexican breakfast on the cheap and double-quick, I could hardly have done better. If I’d only been there a little earlier, I could have taken advantage of the “early bird special,” which is eggs, beans, tortillas, and coffee for $5.99. 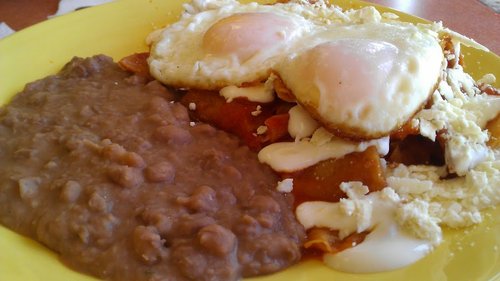