The Hidden Dangers of a Weekday Brunch at Parkhouse Eatery

When Sarah invited me out for a Friday morning brunch, I had no intention of drinking a mimosa and then blowing off the rest of the day, but that’s exactly how it went down. We met at Parkhouse Eatery, where we were seated at a perfect half-in-the-sun-half-out table on the patio.

It was 10:00 a.m., sunny, and (like I said) Friday. Before we’d been seated five seconds, Sarah ordered a glass of sangria ($5). I stuck with water for the five minutes it took for her drink to come out. It was so pretty, so. . .indulgent. I’m not a sangria fan, but looking at hers made me feel a tad envious and uptight – what with my plans to spend the rest of the day working.

Five minutes later, we toasted to the gorgeous day and clinked our drinks together. Her sangria, and my sunrise mimosa (orange juice, raspberry puree, and champagne - $6.75). 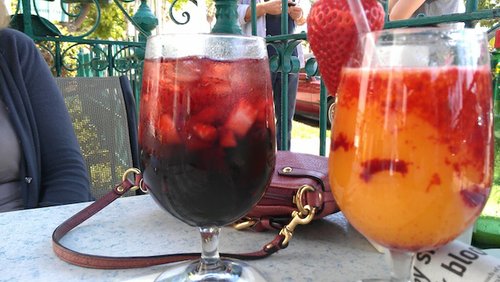 We decided to order two plates and share them. The grilled breakfast pizza (baked with scrambled eggs, bacon, and asiago cheese on homemade pizza dough - $12.50) sounded better than it looked. I was disappointed when the server first set it down. 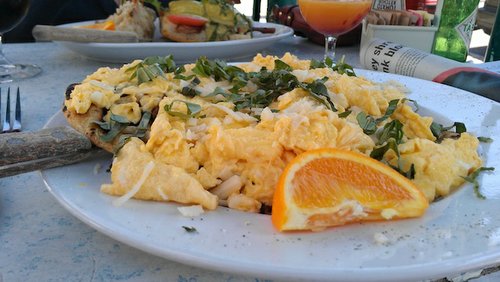 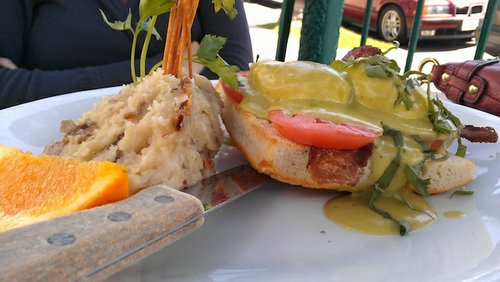 The other dish we ordered was the PH Benedict (two poached eggs, bacon, and tomato on grilled focaccia, topped with avocado hollandaise - $14.50). It came with mashed potatoes that didn’t appeal to me, so I didn’t eat any. Sarah described them as, “Weird. Not the best.” The benedict was decent, though not as memorable as the breakfast pizza.

As tempting as it would have been to order a second mimosa, I did not. Instead I drank coffee, which did nothing to salvage the work I’d planned to get done that day. We spent the rest of the day doing nothing but loitering at a bookstore and daydreaming about a book club we wanted to start, wherein interested members would have to take a Rorschach inkblot test prior to admittance.