When I was working just down the block in Hillcrest, I used to come to Babycakes all the time to get coffee before evening shifts. That was back when the place only sold coffee and cupcakes. By all accounts, that was a recipe for success, but more is better, right? Since that time, Babycakes has gotten breakfast, lunch, and dinner service rolling, as well as a full bar. I stopped in for a late-ish breakfast on a weekend morning to investigate.

Just getting coffee at Babycakes used to be a pleasure because the service is super-friendly. The staff seemed genuinely cheerful, true to form, even on a Sunday morning when the brunch crowd no doubt pours in non-stop for hours and hours. I even got the feeling that the good will was genuine, not just a ploy for better tips or the result of totalitarian management demanding smiles from waiters.

The coffee bar still gets the job done. The lattes and other specialty drinks are where it's at, as the espresso isn't quite at the level where it really satisfies on its own. It's far from bad, but coffee snobs are going to be left wanting a little more from a straight shot of espresso.

The "Baby Brunch" menu, while not extensive, covers all of the basics: breakfast sandwich, omelets, muffins, pancakes and french toast, etc. There's an appropriate amount of cheekiness in things like the "skinny bitch omelet" (egg whites, peppers, onions, and tomatoes for $11.95), which I didn't order because I'm not one. Also, "hugs, humor & happiness" are listed right on the menu as "$ free." Once again, for whatever reason, I buy it and I don't just think they're being cute. Babycakes seems truly friendly.

A slice of spinach quiche ($7.50) served with fresh fruit was sized towards a more modest appetite. The crust was very crumbly in the manner of a French tart as opposed to an American pie and the quiche was well-balanced and not too salty, cheesy, or bland. 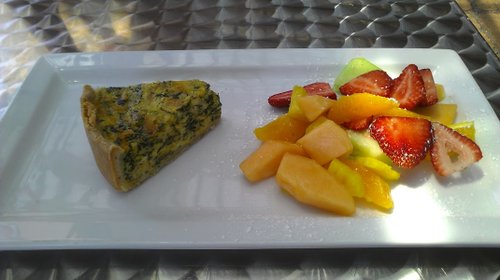 Novelty struck in the form of the red velvet hotcakes. As Babycakes got famous for selling cupcakes, it makes sense that the kitchen would transpose the popular red velvet cupcake into pancake form. Served with a sweetened cream cheese spread and loads of melon and strawberries, there was no way around the fact that I was eating cupcakes for breakfast. I was OK with this because a) it's rare to see something different like this on a menu, and, b) man cannot live on oatmeal and egg whites alone! The hotcakes were tasty, too. I might not eat them every morning, or even every weekend, but they were great for a treat.

Babycakes serves brunch on Saturdays and Sundays from 9-3 and is located at 3766 Fifth Avenue in Hillcrest. The service is from the counter or bar, so cozy up with the baristas and bartenders in order to get in on a good breakfast and a great vibe.

The red velvet pancakes are a cute idea. Looks like they might be a good "share" item, where you get that and an egg/bacon salty dish to share along with it. That tiny little piece of quiche looks scrumptious but naked on that big plate.