For whatever reason, small towns with excessive antique shops engender mistrust. Neighborhoods in major cities with the same concentration of antique stores, however, are exempt from the rule. Antique Row Café, right along the namesake stretch of Adams Avenue in Normal Heights, is an institutional breakfast spot in the neighborhood. The restaurant also has a full dinner and lunch menu, but it's really during the weekend breakfast rush that crowds can build up. Fortunately, there are airpots of coffee outside for everyone stuck on the wait. 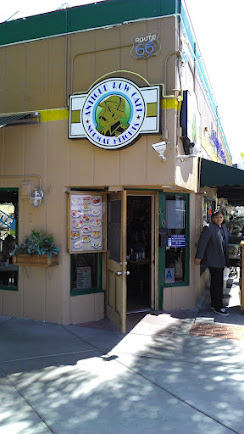 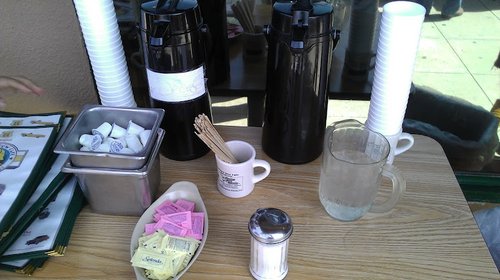 The interior is a collage of imagery from classical Hollywood and Americana in general. The effect could be tacky, it verges close at almost every point, but the hipster clientele and the popularity of the place assure that Antique Row remains cool not kitschy. Perhaps this is also because the effort at decoration is wholehearted, as opposed to the frustrating, pre-fab hodgepodge of corporate dining. Little things, like the seeming legitimacy of vintage soda bottles in the back room, can and do matter. 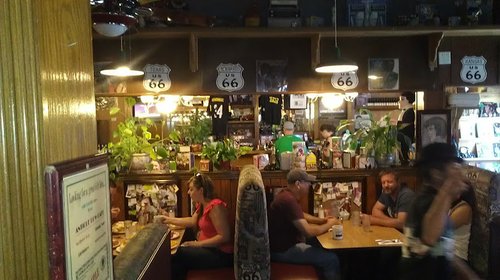 Inside the Antique Row Cafe

Even on a busy weekend morning, service was exceptional. Servers and bussers were attentive and effective at a level seldom seen at much higher class (and higher price) restaurants. It can seem unclear whether customers are obliged to pay at the counter or to send payment up with a server, so the only hitch was that the staff didn't clarify that issue. Still, being waited on hand and foot to such a degree is a pleasant surprise from a casual breakfast place.

The medium-sized, medium-priced breakfast menu features the usual run of egg and pancake dishes. Nothing truly shocking stands out, although a daily specials board sometimes features notable exceptions like red velvet Belgian waffles with chocolate sauce. Expect to pay between seven and twelve dollars, on average, for generous portions of food. An "early bird" menu that gets served until ten in the morning has some breakfast specials that have prices cut by almost 50 percent.

An order of apple cinnamon pancakes came with two good sized cakes and a small lake of what amounted to apple pie fulling. The topping was sweet enough that no syrup was needed, and the tender cakes were able to withstand the large amount of gooey, apple mixture. The apples did have a sugary, somewhat industrial texture, but that's less of a concern with a $7 price tag. 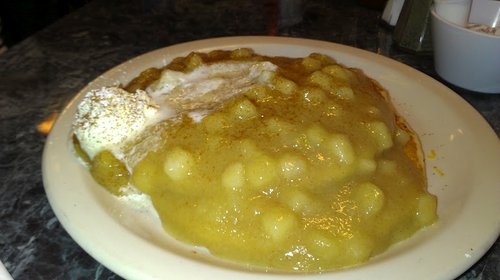 One of the more indulgent menu options, the Irish croissant, had been stuffed with scrambled eggs, corned beef, and hollandaise sauce. It was served with a large side of home fries that had been covered in cheese and wanted only a little Tapatio to be perfect. The pastry itself was oddly more sweet and puffy than buttery and rich, but the dish still managed to induce a stupefying, and definitely satisfying, food coma. 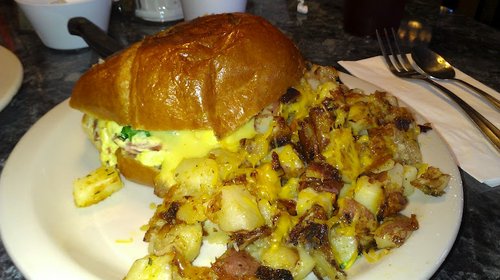 Such a big, sugary breakfast might not be the kind of thing that everyone wants to partake in on the regular. In truth, the food may not have been at the culinary cutting edge, but the excellent service, reasonable prices, and generous portions seem to sway the balance in the Antique Row Café's favor.