The first thing that leaps out about the Ken Cafe is that it's on one of the nicest little street corners. It's across the street from a park and the area is as pleasant as you'd expect the mayor's personal neighborhood to be! The long, narrow patio wraps all the way around the front of the cafe and the inside space, which seems to have been thrown together in a calculatedly haphazard manner, gives way to more seats than the quiet building suggests. 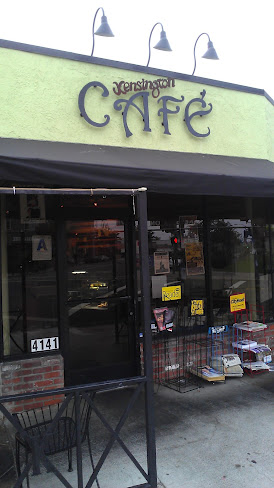 I found it to be adorable and cozy inside without giving undesired impressions of gingerbread cottages or faux-rustic charm.

At the breakfasting hour, the espresso bar came through in a big way. Even a cup of drip coffee ($2) was hot, fresh, and kept full by the attentive server. A small display case contained a few scones and other morning breads, but it's fairly clear that the cafe has put the onus on more substantial fare for breakfast patrons. As it is, the selection of breakfast foods is short, a fact that's augmented by their being served until 4PM. This isn't a bad thing, but it's not in keeping with the trend toward lengthy menus that has created a "spoiled for choice" mentality for diners. On the menu, scrambled egg dishes like the "Spanish revival," which made use of cheese and soyrizo, and some breakfast sandwiches composed the bulk of the protein-heavy options. Lighter choices came in the form of various acai and oatmeal bowls.

Waffles command their own section, and the "honey gone nuts" waffle topped with candied walnuts, honey, and sliced bananas proved itself an intrepid undertaking at an early hour of the day. Adding bacon and eggs ($2) was an easy way to augment the carboloaded meal with some protein. The eggs were a touch overcooked to my taste, which demands silky eggs finished only to the point of coagulation, but the thick slices of bacon were in keeping with my preference for chewier strips. 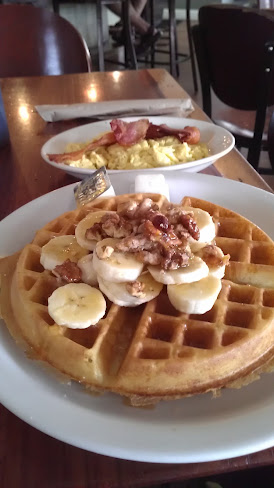 For whatever reason, the Kensington Cafe has chosen to flatten the pricing out to the point where nearly every option falls in the $6-$8 range. It's not until something like this happens that the importance of price in decision making becomes apparent. When everything costs essentially the same, it's very hard to choose, even when the menu is limited. This curious exercise in cognitive dissonance is unexpected coming from a breakfast menu, but it's interesting. I don't know if it gives Kensington Cafe any kind of advantage in the highly competitive coffee stop field, but it can't hurt. Or can it? You tell me.