Afternoons at the Mission

I've visited the North Park branch of the Mission restaurant for breakfast a few times. There is usually a line out the door. Calling the breakfast there "popular" would be an understatement. The restaurant enjoys such a sterling reputation that it can get away with dropping the ball from time to time. Since it's "the place to go" people will go there no matter what. Because of this, I've usually been a little let down; perhaps because the restaurant is so slammed that the kitchen can't seem to get the promising food quite right. To avoid this, I popped in to the Mission at around 2PM on a weekday. There was still a grip of people eating breakfast (the tragically hungover crowd rises late), but the dining room was completely cleared by the time I left.

I can't help but like the open-rafter design scheme of the Mission. It screams "barn!" to me, which is offset by the modern artworks that hang from all the walls and the light that pours in from the big windows. 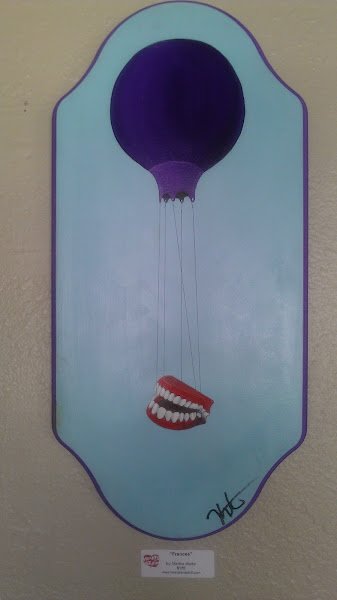 This one is titled "Frances"

The restaurant is open 7-3 every day, so breakfast is an option until closing time. Still, there are a few lunch options on the menu and I opted for an "Indo Chine double happiness bowl" ($10.50) from the "Chino-Latino" section of the menu. The bowl was the most substantial item there, the others being more along the lines of wraps and tacos.

I admit, I expected a greasy stir-fry, but the bowl of brown rice, grilled zucchini, sprouts, broccoli, chicken, and beef was more finely prepared than I had anticipated. The rice was fluffy, the meat nicely cooked and seasoned, and the portion was perfectly generous. A zig-zag of peanut sauce around the edge of the bowl was a nice touch, even if it wasn't strictly necessary. 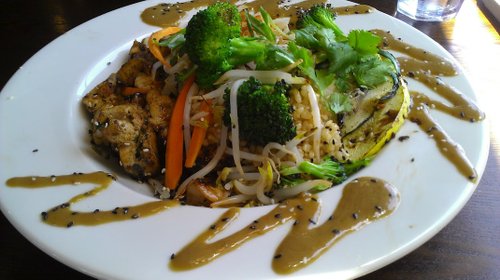 The dish was a hippie enough to live up to the "conscientious cuisine" motto that's emblazoned on the sign outside, but not without some refinement. In fact, at the late hour of the afternoon, it seemed that the more relaxed pace of business augured well for service all around. My dining neighbors seemed well attended by their servers and everybody's food looked pretty good. I would say that early afternoon trips to the Mission for something else from the limited lunch menu (mostly sandwiches and salads) or a ridiculously late, potentially second, breakfast might be a good idea.

Weekday afternoon is definitely the best time to enjoy the Mission. My favorite part of this place is that they will serve a side of their amazing french toast so you don't have to decide between salty and sweet.