Giant menus make it difficult for me to make decisions. Last week, at La Mesa Bistro & Bakery, it took me ten minutes to settle on the Bagel & Lox, only to be told they were out of the lox. So I had to step aside and let three people go ahead of me in line while I stressed over what else I might want.

Such a situation often ends in food envy on my part. My dining companions always see what they want right away, and it’s usually way more delicious than mine.

This time, even though S did not hesitate when ordering the Acai Bowl, it turned out she was the one with food envy when she saw my ABC Quesadilla. 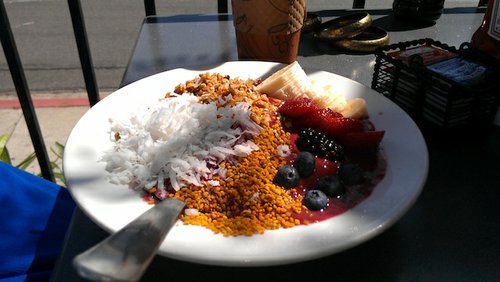 I almost envied myself when I saw the ABC Quesadilla (eggs, avocado, bacon and cheese) – it looked that good. 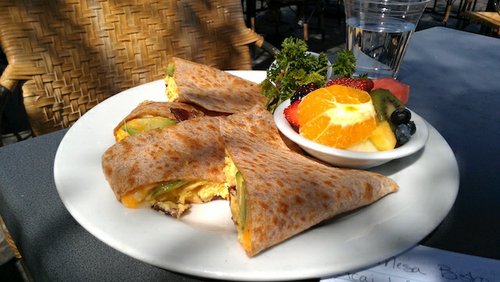 The menu says, “served with beans, salsa, and sour cream,” but I chose fresh fruit instead. Good choice.

The restaurant itself was a good choice, too. Another one of those La Mesa surprises that S likes to spring on me. At the edge of a strip mall, the outside isn’t much to look at, but inside, it’s kinda swanky. 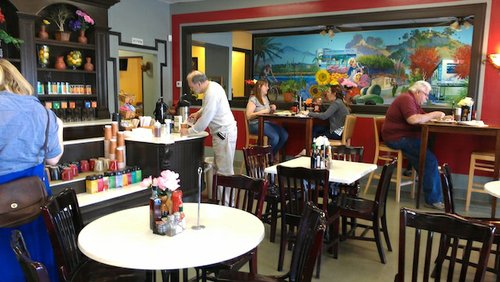 And although the view from the dining patio is street on one side and parking lot on the other, it’s not a super busy area, so it’s easy enough to enjoy the sun and some neurotic conversation with a tightly wound friend. 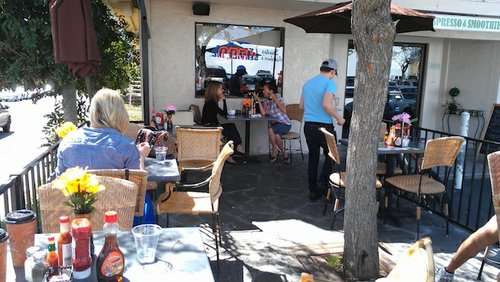 Note: S and I met up around 11:00 a.m., and it was easy to find a seat. She says that closer to noon, the place can get pretty packed.