Earlier this week, I happened to pass the corner of 71st and El Cajon right around 11:30, just as I was beginning to think about lunch. I had been to Terra American Bistro once before, for drinks, and I remembered the interior as cozy and the menu as intriguing, so I stopped. 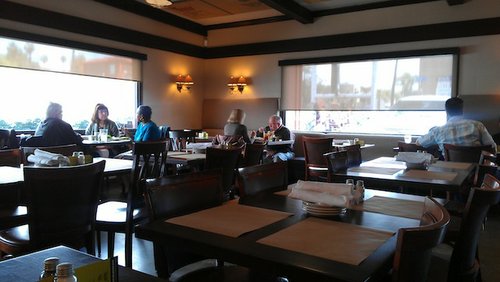 Turns out, almost all their lunch options are in the $10 range. I had my choice of salads, sandwiches, and pastas. I had decided on fish tacos ($9.95) when the server came to my table and mentioned the specials. I don’t remember the first one, but the second, salmon sliders (salmon cakes with wasabi aioli — $11) sounded even better than fish tacos.

The server asked if I wanted fries, salad, or the citrus slaw. When I said salad, he informed me it would be a wedge of iceberg lettuce rather than a plate of greens, so I went with the citrus slaw (with a kaffir lime vinaigrette) instead. 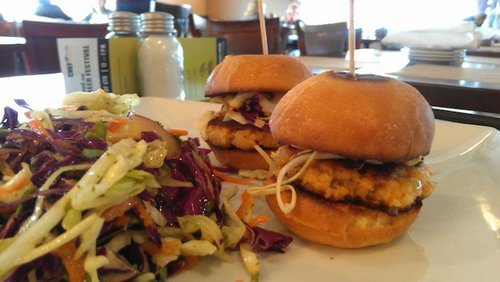 The sliders were full of flavor. I’m pretty sure I moaned out loud (with joy) and rolled my eyes back in my head while I ate them. But they were also tiny — which meant they were gone before I knew it. And, unfortunately, the slaw tasted like soap to me, so even though there was a huge mound of it, I didn’t eat more than a couple of bites.

Even still, I plan to return one day to see if the anything on the daily lunch menu is as moan-inducing as those salmon sliders.