When I was a kid, my heart hurt to see anyone dining alone at a restaurant. It hurt so bad, I had to look away. During my twenties in New York, I discovered the joy of a great novel, a glass of wine, and a whole restaurant table all to myself. These days, when I have the chance to eat alone, and to linger over a magazine rather than over my computer and all the work I have to get done, I cherish it.

A couple of weeks ago, I received an invitation to a hosted lunch at Jsix. I was quick to jump at the opportunity because A) who wouldn’t want a free lunch? And B) I rarely get downtown. I thought about inviting a friend to join me, but then changed my mind when I considered what a pleasant time I could have all by myself.

When I arrived, the host seated me at a large, round booth that curled around me and offered a private cocoon of sorts. I could see no one else in the dining room unless I stood up and looked over the top of the booth. Seated, I had a view out the large, warehouse-like windows that overlook J Street. It was perfect.

And then, just as I began to look at the menu, the hovering began.

I had come for the Quick Lunch Menu – three courses for $15. Before I had a chance to look over the choices (soup or salad for the first course; ravioli, burger, or chicken sandwich for the second; and gelato, sorbet, or cookies for dessert), Kris, the lovely head server was at my table smiling up a storm and informing me of what I would eat. 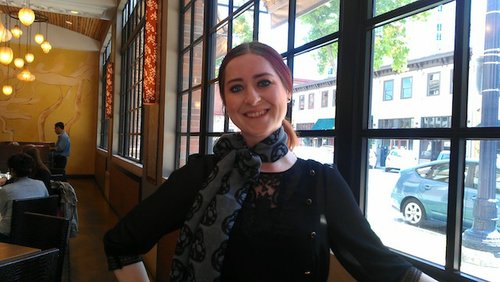 Of course, I could have made my own decisions, but I opted instead to go with her recommendations.

I will go back for the lavender lemonade alone. It could have gone very wrong with too much lavender or not enough. Heaven. 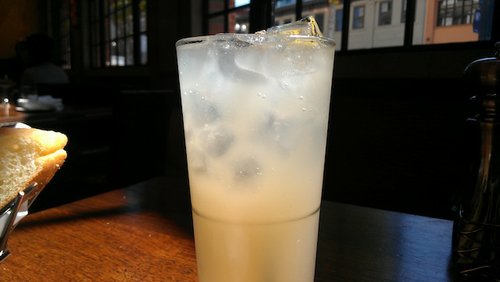 The bread: amazing. The roasted red pepper focaccia was my favorite. And I could have eaten the kalamata olive tapenade by the spoonful. 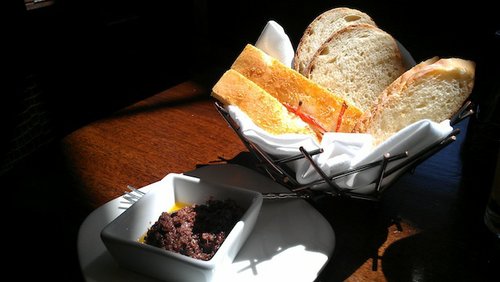 I’m glad she insisted on bringing some of both the soup and the salad because I don’t care for ginger. Never have. But because Kris raved about the soup, I probably would have ordered it anyway. The texture was wonderfully smooth, and it might have sent ginger lovers to the moon. Not me. 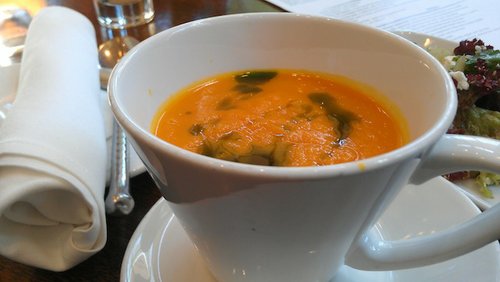 I preferred the salad, which was light and topped with quinoa, of all things. 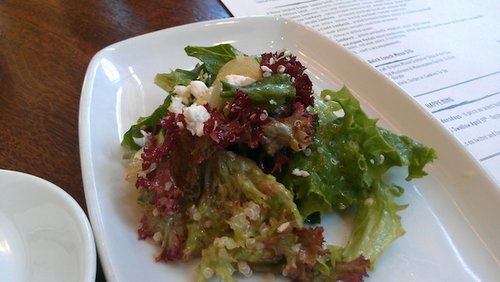 For dessert, Kris brought a chocolate chip cookie and gelato, both of which will make choosing difficult next time. 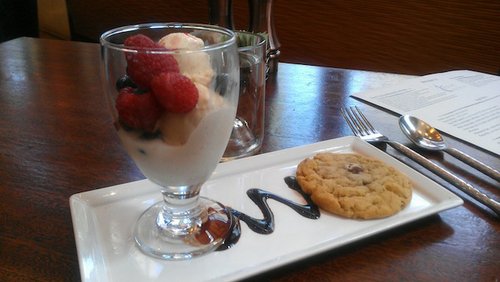 The wild mushroom and mascarpone ravioli. I wish I’d gotten the burger instead. The pasta itself was a bit more dense than I care for, and the intense mushroomy flavor got to be a bit much after the first couple of bites. 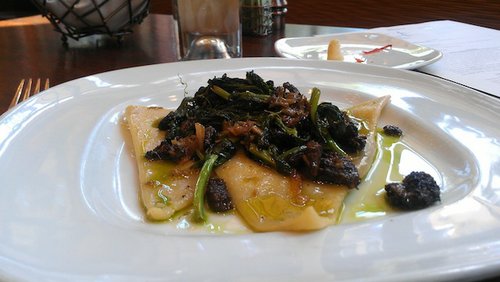 Accepting a hosted lunch. It resulted in a lot of hovering – the chef twice, and Kris every two minutes or so. I was unable to get through the magazine article I’d hoped to read. Although everyone – especially Kris – was thoughtful and kind, I would much rather be left alone than checked on after every bite.

The lesson: An hour alone, dining in anonymity, is worth the price of a meal – especially when it’s only $15 for three courses.