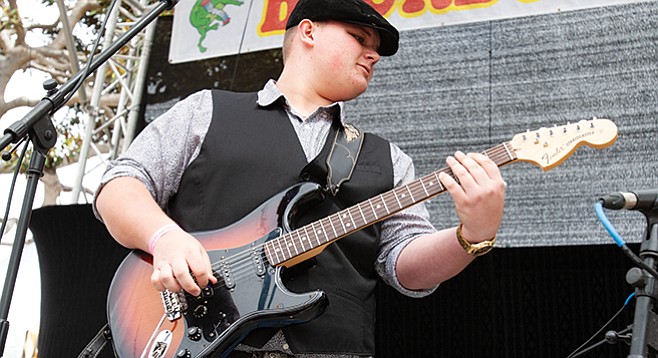 Tonight it's loud and packed and hot

“Six. Four. Seven,” the man at the microphone shouts like a preacher. He holds a red raffle ticket up in the air. Proud Mary’s is a Kearny Mesa restaurant, and tonight it’s loud and packed and hot. “Six-four-seven is our winning number.” A blues music jam session is in progress, organized weekly by the hometown jazz radio station KSDS 88.3 FM. The raffle fills the time between band changes. Behind it all, just outside the reach of the stage lights, the Hitman quietly tunes his guitar. 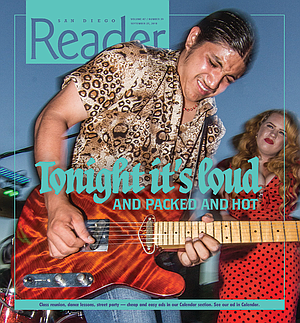 Anthony Cullins, the Fallbrook Kid: “I just hope to go to Berklee College."

Shortly, the next pick-up band materializes: a drummer and a bassist and a slide guitar player. The drummer shuffles out a tight, slow, washtub beat, the slide guitar drones a chord pattern as old as dinosaur bones, and the collective motors into “Hoochie Coochie Man.” A bald man who was young when that song came out 65 years ago takes up the microphone and belts out the words. 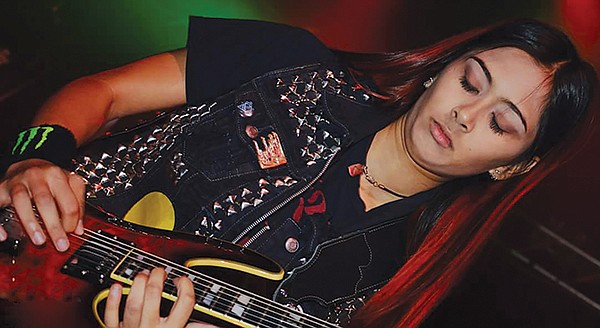 The Hitman has the apple-red cheeks of a child, which he more or less is. In contrast to the much older guys in the band, the 15-year-old high school sophomore appears almost comical, until he plays his guitar. The teen’s fingers know to work the topmost reach of his guitar’s fretboard, up where the high notes are, where the emotion lives. There’s spark and force in his playing. Tonight’s audience of mostly middle-agers and blue-hairs clap and hoot their approval. 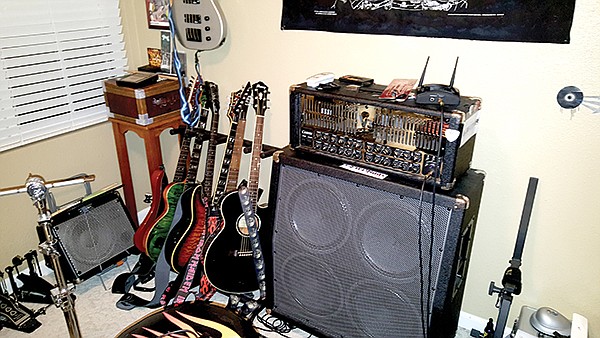 Keona Lee guitar collection. "Each one has a different tone and a different personality."

Hoary blues-rock from a lifetime ago is not the province of many high school students. Nor, according to sales trends, is the electric guitar. The Hitman plays as if he didn’t get that memo. He performs in the grand gestures of musicians from an era he can only have seen on YouTube. He postures like a true guitar hero, a race of musicians that went extinct years ago. 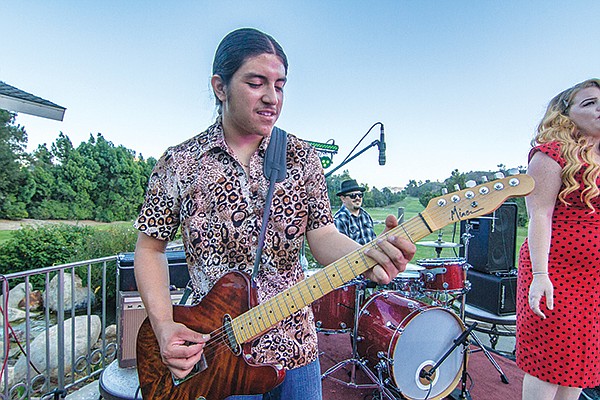 Google the words ‘guitar’ and ‘hero’ and you get hit after hit about a video game of the same name. By way of defining the term, consider such guitar luminaries as Eric Clapton, Jimi Hendrix, Eddie Van Halen, Jimmy Page, Stevie Ray Vaughan, and Angus Young. In their days — the 60s, 70s, and 80s — they packed arenas. They sold millions of records. But, as TheConversation.com pointed out last year, it’s been many years since the likes of any of them have ruled the airwaves. 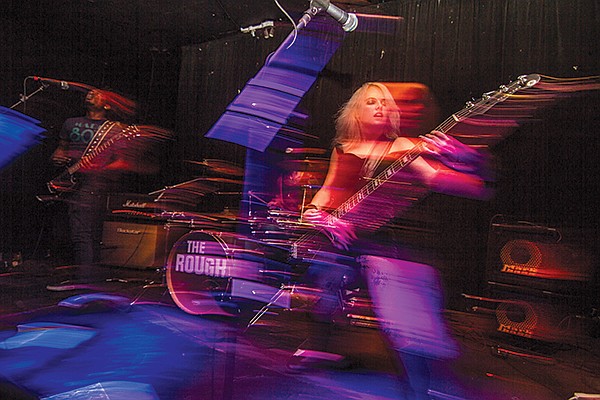 “It’s all over. And it’s not coming back.” That’s Jeff Snider, describing the present state of the electric guitar. “What the guitar industry needs in order to survive,” Snider says, “is another guitar hero.”

Snider should know. When times were good, Snider, himself a pro level guitarist, owned Jeff’s Guitars, from 1992 to 2005, a Kearny Mesa shop where he built and repaired guitar amplifiers.

In 2017, the Washington Post reported that guitar manufacturing giant Gibson’s annual revenue slipped from $2.1 billion to $1.7 billion and that rival guitar manufacturer Fender was likewise feeling the pinch. Fender’s revenue fell from $675 million to $545 million. The drop in sales likewise hit guitar retailers in their cash registers, including the country’s largest, Guitar Center, which has 269 stores throughout the U.S., including locations in San Marcos, La Mesa, and San Ysidro. In March 2018, Fortune Magazine blamed “a shift in music tastes” on the company’s $1 billion debt and labeled the outlook for recovery “poor.”

“Now, it’s more electronic music, and kids listen differently,” former Beatle Paul McCartney told the Chicago Tribune last year. “They don’t have guitar heroes like you and I did.”

“The Hitman? Actually, that was [my guitar teacher’s] idea.”

When he’s not being the Hitman, he is Benjamin Davis. He goes by Benji. He attends University City High School. The Davis family lives in Kearny Mesa. “My dad got me my first guitar when I was eight. He taught me the chords to a couple of Jimmy Buffet beach kind of songs. He used to go through the playlist on his iPod through the computer and play music for me. One time, he played Stevie Ray [Vaughan.] I said, I want to sound like that.”

By the time he was 10 years old, Davis had learned two valuable lessons: one, that he could play guitar pretty well, and two, that he was relatively alone among his peers. “The biggest thing,” says Davis, “is that kids just aren’t drawn to an older type of music. They listen to rap. Pop. It’s hard to find kids my age to be motivated to be in a band.”

That said, as absent as electric guitars are from mainstream music, there is a small but significant population of youth guitar slingers throughout San Diego gigging and hoping that those glory days of old will defy trends and come back.

“Oh, you play guitar? You wanna be like Taylor Swift, right? That’s what people say when they find out I play,” says a 17-year-old guitar shredder named Keona Lee. She lives with her family in Escondido. Her band is called Kryptid. “We started in 2013 or 2014. The drummer is my age,” she says. “But our singer is 30, and our bassist is 29. There are musicians my age, yes, but it’s hard to find musicians to mesh with. Many kids my age can play, but not many of them are into heavy metal. They play jazz, or they play poppy stuff like you hear on the radio.”

Keona says she has been listening to hard rock for much of her childhood. “I think the first thing I heard was my dad’s Motley Crue Greatest Hits CD. Mick Mars (the Crue’s guitarist,) I wanted to be like that. My first guitar was a birthday present from my parents, a Fender Squier Stratocaster. It’s hanging up on my bedroom wall right now.”

Lee’s collection has since grown. “I own quite a few guitars now. Each one has a different tone and a different personality. I feel different when I look at myself in the mirror while I’m playing each one. Like my Dean Dimebag Dean from Hell guitar? It reminds me of one of my idols.”

That would be the late Dimebag Darrell (Darrell Abbott) of Pantera fame. “That guitar, it makes me want to shred.”

Seventeen-year-old Anthony Cullins looks like he just stepped out of 1960s San Francisco. He wears his hair shoulder-length. More often than not, a string of beads circles his neck. He plays old-school muscular Hendrix-Clapton-Page style blues-rock guitar. He calls himself the Fallbrook Kid, after his hometown in San Diego’s north county. Cullins, winner of the “10 Under 20” contest at the 2018 Dallas International Guitar Festival, appears to be what the industry says it wants: a new guitar hero in the making.

By the time he was 15, critics were calling him a prodigy. Cullins’s website catalogs his press clippings and his many product endorsements. He is the subject of a Backstage 360 documentary, and another one by Straight Out of San Diego videos. A photo of Cullins seated on a throne made of gilded electric guitars circulated social media sites such as Facebook over the summer. But when I ask, the Fallbrook Kid plays down the notion of being the next guitar hero.

“I just hope to go to Berklee College. I’m coming into my senior year in high school. I found out I’m graduating early. Whatever happens,” he says, “happens. I’m just going with the flow of things.” Which means? “The flow is taking opportunities that come my way. Some weeks, I’m really busy.”

The other members of the Vigilantes are of a gray-headed age that Cullins describes as ‘seasoned’ on his Facebook page. “I play with people in their 20s to their 60s. That’s the generation that picked up on this music,” meaning blues-rock. “My generation? Most kids don’t fully understand the guitar. But there’s not a whole lot of guitar-based music now,” he says. “Most of what kids my age listen to is rap.”

The Fallbrook Kid started young. “I remember my grandmother bringing little toy guitars from Tijuana, and I’d run around the house, beating them up.” The music hook was likewise set early. “I listened to Led Zeppelin, oldies, 1960s psychedelic rock, everything. A whole mix of different genres of music.”

Could the Guitar Hero era come back?

“Yes, if players balance the songwriting and find relatable things, it could definitely come back. No, I’m not the last man standing. There’s definitely more people out there playing electric guitar, kids who are way more ahead of the game than I am.”

“The most depressing thing about it?” Julia Whelpton (the Justice Fire, the Rough) says of the deterioration of the guitar industry. “It’s going to NAMM.” (NAMM is the National Association of Music Merchants which hosts an annual music instrument and pro audio trade show and networking convention.) “Every year I go, it gets a little smaller. The artists that used to hang out? They’re not coming any more. And look at Gibson,” she says. “Gibson pulled out of NAMM last year.”

Otherwise, the rock-and-roll bassist keeps herself busy teaching music and working for a bona fide guitar hero from back in the day: Roni Lee of Joan Jett and Kim Fowley fame.

Whelpton is 26. She was born and raised in Oceanside. She is known on social media as #thatblondebassist. On being a working rock and roll bass guitarist in a sea of diminishing returns: “My goal as a musician is to portray that live music isn’t dead. We just need to change the way we sell it. Time and again I see original music bands or cover bands that just stand there. With Roni, we have fun, and people react.”

Whelpton was part of a all-girl band called Daddy Issues. “We lost that name in a trademark war with a band in Nashville,” she says of the band later known as Kick the Princess. She’s been a member of Roni Lee’s band for three of the five years she’s been pro. “Roni’s mentored me.”

When I ask her about being the youngest person in the band and younger than most fans of guitar hero music, she says, “I embrace it. Besides, the stuff we’re playing is ageless. And, being younger is an advantage.”