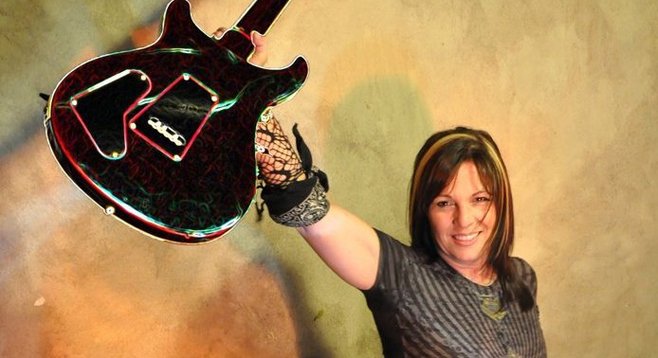 Roni Lee began her career in Hollywood as lead guitarist for Venus and the Razorblades, a rock band created by Runaways mastermind Kim Fowley that would team up with Van Halen as their opening act for a number of shows.

“David Lee Roth put me in a barrel and rolled me down the stairs at the Whisky,” says Lee. “The Ramones played with us too. And Blondie and the Motels. And Van Halen was all glam rock and roll. And they played this stupid song ‘Runnin’ with the Devil’ every night, and we made fun of them.”

The band also opened for Devo and many others. Van Halen later recorded the Razorblades’ song “Young and Wild.” Although the band wouldn’t have any chart success, they released one of the earliest U.S. punk singles, “Punkerama,” in 1977. At the time, Lee was roommates with Runaways Joan Jett and Sandy West.

“I Want to Be Where the Boys Are,” co-written by Roni Lee and Kim Fowley, became a regular part of the Runaways’ live set, being included on the 1977 Live in Japan album and in the 2010 Runaways biopic, sung by actress Kristen Stewart. In 2011, “I Wanna Be Where the Boys Are” was covered by punk band F-13 on a Runaways tribute disc.

“It’s an interesting time period. I was there with Joan Jett. She and I ran all over Hollywood when we wrote all those songs with Kim Fowley.”

Lee arrived in San Diego in 1984 to settle down with her family at the tail-end of a career that had seen her perform in latter-day versions of Steppenwolf and Spirit, as well as record an as-yet-unreleased album under the band name Touch, backed by the original Heart rhythm section.

In 2009, Lee (who has two children with her ex-husband Lou Fanucchi) co-founded Queen Divas of the Universe, alongside bassist/singer Shaaron Schuemaker (Tim Flannery, Koko Loco) and keyboardist Laurie Beebe Lewis (the New Mamas and Papas). “Laurie kept saying to us, I got a band name. Queen divas of the universe. We actually all did kinda like the name. It’s tongue in cheek because we're kind of an all star band. We do our own projects. When we come together, we represent three genres of music. I’m the rock girl, Shaaron’s the blues girl, and Laurie is kind of the pop girl.”

Their debut full-length All Wrapped Up in Christmas was released in 2011. “We decided long ago that we are a cover band. Even though we have originals, that’s not what we’re trying to do. We can play anything, though, because we’ve all three done everything. We’ve all got a big long history. We get together whenever we can.”

In November 2011, Lee’s solo band opened for Missing Persons. “Dale Bozzio got very ill after their third song. Her backup band jammed on a blues tune for a few minutes then, when they realized she wasn’t coming back, just sort of looked at each other...I was on the side of the stage and asked if I could be of any help. They said ‘Do you know the lyrics to ‘Walkin' in L.A.?’ I said ‘kinda’...my friend Nick handed me a cell phone where he had Googled the lyrics and we Walked in L.A., as well as singing a few other tunes. We finished the night with a bang! Not one ticket refund. Always be ready for anything in rock and roll.”

Lee’s song “One More Chance” appears on the 2012 San Diego band compilation Staring at the Sun Volume 10. The following year, on February 1, Michael Jackson guitarist Jennifer Batten guested with Lee's band at Brick By Brick. “We just met a few weeks ago when she joined me onstage in Portland,” Lee told the Reader. “We had a great time, so decided to do more shows together.”

Lee also opened for Runaways singer Cherie Currie, who played one of her first concerts in 25 years at Brick By Brick on May 3, 2013.

In summer 2015, after more than 35 years ("With Bert Evanger's help," she says), Lee received a gold record for the song "I Wanna Be Where the Boys Are," most famously recorded by the Runaways and Venus & the Razorblades. That winter, she embarked on a tour of Germany that ran from October 25 through November 15.

After founding her own label, Play Like a Girl Records, Lee put the finishing touches on a new album titled Heroes on Sunset. A preview track covering the Runaways' "Cherry Bomb" was released, featuring Kenny Aronoff and Lynn Sorensen.