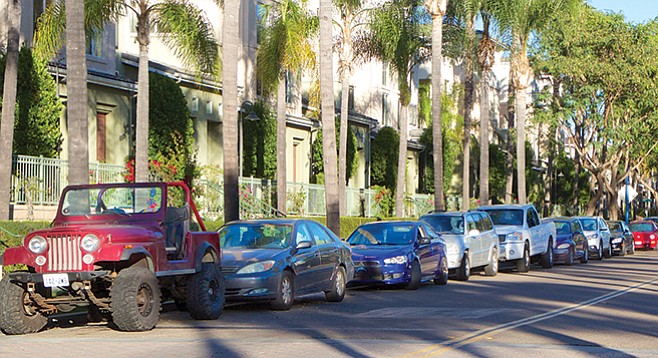 Some will lose Sunroad’s parking game in Kearny Mesa

Residents of Kearny Mesa refer to it as “musical cars,” the nightly race against hundreds of neighbors for a parking spot. If unsuccessful, the loser must decide between parking as far as five blocks away or risk getting towed from the nearby hotel parking lot or permit-only parking zone.

The parking plight of residents living off of Highway 163 in Kearny Mesa is different than those who live in older areas of San Diego. Unlike older communities where space is limited and populations continue to grow, these residential developments are all less than ten years old; it should have been safe for the new residents to assume that the issue of adequate parking was addressed before construction was allowed to proceed.

But problems will only worsen for residents living along Spectrum Center Boulevard. Developer Sunroad Spectrum’s massive development is unfinished, which means more people will move to the area and make parking spaces more scarce. The issue has resulted in residents wondering whether they should sell their homes and leave the area. 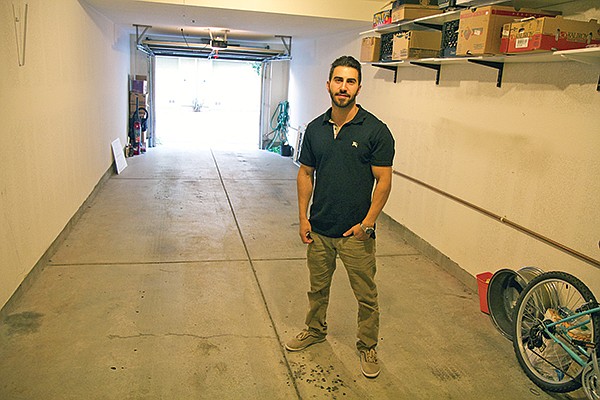 Over 1000 residential units (shaded area) fronting Spectrum Center Blvd have street parking for only 68 spaces. Evenings and weekends, many guests and residents have to park up to one mile away on Ruffin Road.

“I like living here, but I’ve been thinking about putting my house up for sale just because of parking, and it’s ridiculous for me to have to say that,” John Forouzandeh, a resident of Tribeca, one of the five developments inside the Spectrum Center, says while standing in front of his building.

Forouzandeh, 29, says he’s had a difficult time finding and, more importantly, keeping roommates because of a lack of parking.

“I bought my place in 2010. And, I’ve been thinking about moving after construction on Ariva completed almost a year ago.... Another building [turned the public parking spaces in front of their buildings to private, residents-only parking zones] and began towing. Once we couldn’t access that anymore, I found myself constantly having to illegally park my truck at Marriot and walk home because coming home after 6:30 p.m. or on weekends and finding a spot is like hitting the lotto. Also, I rent out a room in my house and have had two people move out in the last year. They told me that they love the location but the parking is just impossible.”

Making matters worse, after construction was complete on a new residential building on Spectrum Way, developer Sunroad Centrum painted a long stretch of curb red, most likely to help curb-appeal and entice apartment hunters to sign a lease. The city is currently fighting a lawsuit for allowing a major redesign of Sunroad’s development, including removal of a number of parking spaces, without providing the opportunity for public input.

If given the chance, plenty of residents would have been willing to speak on the matter.

Instead, Forouzandeh and dozens of neighbors have turned to an online petition in hopes of convincing the city and Sunroad to address the problem.

John Forouzandeh speaks about his experience when parking in his Kearny Mesa neighborhood..

“The communities of Spectrum Center: Boardwalk, Tribeca, Esplande, and Promenade. Residents and guests of these communities have virtually no access after 6 p.m. to street parking,” reads the group’s online petition. “Thousands of new residents who have now moved to this community due to the massive apartment developments have increased the population by a drastic amount. However, no additional parking has been provided, in fact, 15 percent of our public parking has been taken away due to a large reduction of street parking due to a massive curb being painted red for a fire lane the length of 20-to-25 cars.”

Calls to councilmembers and city traffic engineers, as well as the hundreds of people who signed the petition, did have some impact.

“The red curb was installed by the developer based on an interpretation of local fire codes,” writes supervising public information officer for the city’s transportation department Bill Harris. “We received a request for review from the community and our Traffic Engineering Operations team coordinated that effort with the team from the City’s Fire & Rescue Department. Both teams have determined that the red curb is not a requirement and is not necessary for this area.”

City crews have since repainted the curb. It is a victory for residents, albeit a small one. The 20 to 25 parking spaces freed up are nowhere near enough for the hundreds of residents and hundreds of future residents.

Standing on the sidewalk along Spectrum Center Way, Forouzandeh points at the line of cars on both sides of the narrow two-lane road.

“The residents of this neighborhood are outraged, and rightly so,” Forouzandeh says. “We want accountability and an explanation from city planners on why and how they allowed such massive developments without letting this neighborhood have a place to park.

“City planners should never allow such a large development without thinking of all the homeowners that reside in the area and how they will be horrendously impacted.”

The online petition has over 250 signatures. Many supporters have left similar comments.

“We are several large complexes that barely have enough parking for the residents, much less for our guests. The parking situation needs to be taken care of now so that our guests will not be towed and have to pay extra money just to see their friends and relatives.”

Adds another nearby resident, “This is important to me because we have four people in our household with cars and only a two car garage. I’m tired of driving around at midnight for 45 minutes trying to find parking and having the fear my car will be missing the next day due to towing companies hungry for money.”

While walking the short length of Spectrum Center Boulevard, Forouzandeh points to two cars backing in to tight parking spots. He estimates that in 15 minutes, by 5 p.m. on a Thursday evening, there won’t be a space remaining on the street.

“The city might look at this as a parking problem; me and many other neighbors look at this as a life problem. It’s one thing to want to go to a restaurant downtown and not finding parking and have to pay five or ten dollars for parking, but it’s another to come home at night and not have any option other than illegally parking at nearby businesses hoping you don’t get towed.”

RE: "...we have four people in our household with cars..." Really, do all four of them HAVE to own a car? Not even ONE of them can take the bus, or ride a bike?

Public transportation is a joke. If you are not going somewhere along the 'line' then it is useless. I would love to take public transportation but the schedule changes on week ends and holidays when I work and if I get off too late I am stuck. While public transit may work for a few it does not work for the masses. My neighbor could not drive and the worked down town at he was on the bus 4 hours a day (College area to downtown).

You would have to pry my car from my cold dead hands rather give it up.

Rather than get on a dirty crowded bus or trolley. And bike riding stinks and is without protection from drunk, loaded drivers. Developments need plenty of parking.

This is social engineering gone awry. Certain elements of the bureaucracy have long hoped to force us onto the buses by ensuring new developments do not have adequate parking. "Why take 20 minutes to get to work," they say, "When you can hop on a bike or bus and take two hours? This utopian vision of mass transit and millions more in bike shorts makes for smug cliche responses, but in reality it is not a real-world solution to very real problems.

Kearny Mesa has long had parking problems. Zoned, I was told, "industrial", it was exempted from the usual parking requirements for commercial developments. There were areas there that had a parking squeeze forty years ago during the day, in that many employers lacked sufficient on-site parking for their employees. This seems to be continuing the dismal tradition of that part of the city. Yes, if you move into a new development, you should expect to have sufficient parking for yourself, your roommates or family, and an occasional guest. That circling the block sounds like something in San Francisco. But SF has viable public transportation, and most residents use it.

I'll leave it to the great-great-great grand kids to wonder why no one could quit the automobile while they breath through a mask.

In 1900, 1/3 of cars were electric and all over the streets of New York, Chicago and Boston.

The City of San Diego charter does not include a right to park. The philosophy is "a right to build." Do not expect a solution to this problem.

The right to build, or develop, includes the right to build parking garages. The planning and development decision-makers in San Diego will be happy to allow construction approval for private pay-to-park multistory buildings, when the failure to require every developer to provide adequate free parking reaches a tipping point. The misguided City philosophy has nothing to do with being "eco-green" - it's much more about being corporate-dollar-green. If you've ever lived in Boston or NYC, you know what it means to pay dearly for parking near your home.